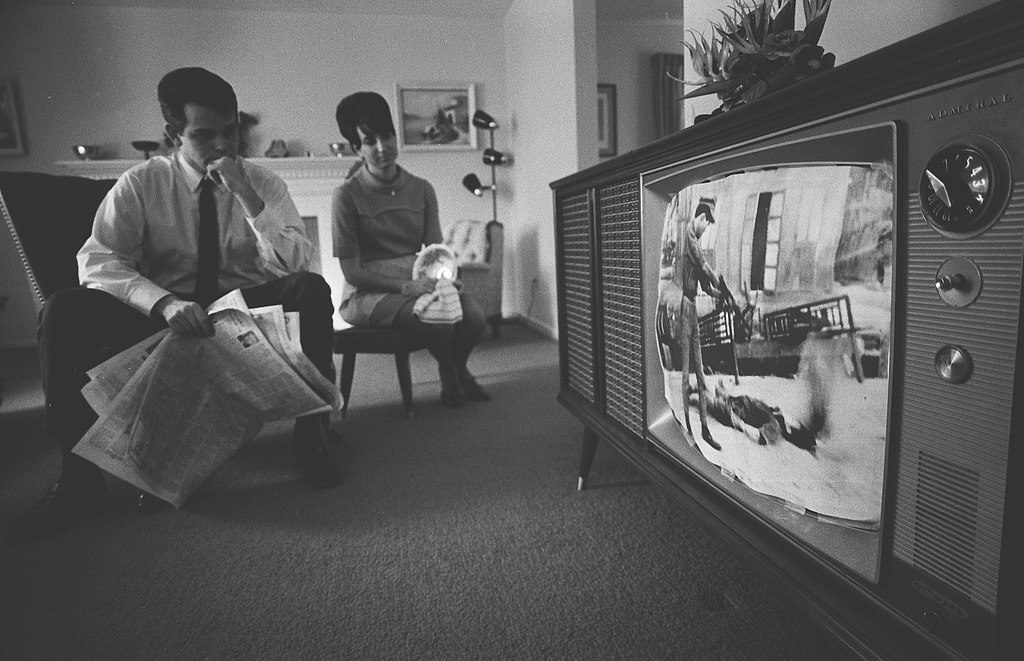 It is important to frame your reporting to account for historical events. In this photo, a family watches the Vietnam War unfold on their T.V. (Warren K. Leffler/Library of Congress)

This week, we wanted to share some advice from two acclaimed documentarians – Callie Crossley and Michael Kirk – about conceptualizing their reporting.

Callie Crossley is the producer of the award-winning documentary about the Civil Rights movement, “Eyes on the Prize,” and the host of WGBH’s current affairs program, “Under the Radar.” Michael Kirk is a longtime producer on “FRONTLINE,” whose credits include “Divided States of America” and “The Choice 2016.”

For all journalists, but especially those who want to write about our current historical moment, it pays to remember history, and frame the current moment in the context of what came before.

Speaking about how she writes about present divisions in the U.S., Crossley says the country has never been united, not even after the gains African-Americans made during the Civil Rights era.

“History is a continuum, so [the United States] never really stopped [being divided],” Crossley said. “What was achieved was some legal victories, but it really didn’t go beyond that…So what I find I’m writing about a lot, particularly during the campaign and now, is using [the civil rights era] as historical context of what’s happening here. Sometimes it’s just pure repetition.”

Crossley says the key change she sees is that more white people are aware of the injustices that people of color face, and are joining people of color in demanding equity.

“The work you’re doing around division … or how people come together in the end…must be framed around that historical context,” she said. “We are not talking about hundreds of years ago, we’re talking about decades, which in the scheme of history is nothing. And here we are, again. It’s almost as though nobody heard the first conversation.”

Michael Kirk’s recent documentaries have focused on polarization in American politics. In his many years following this theme, Kirk has reached the conclusion that polarization isn’t inherently bad.

“Polarization is actually a good thing, in some measure,” Kirk said. With this in mind, though, Kirk pushed questions about how the polarization became so extreme. “How did it go so far, why did it go so far, what are the bridges that can be built, what’s happened with dialogue, what’s happened around issues? Are there some issues that … we are incapable of solving because it’s gone so far?”

Kirk says he sees his documentaries not as advocating a position, but as advocating dialogue and understanding between sides that don’t have common ground.

He achieves this by meticulously mapping out the narrative of each documentary and conducting extensive interviews with each of the characters (usually dozens of people) in the story.

“I always make a chronology and I always have characters in it that are through-characters, who go all the way, and they are usually from a few different sides of an issue,” Kirk said. “And when we sit down with those people for three hours per person, or two hours per person… everybody is lit the same, everybody gets the same amount of time. I say to everybody who sits down, ‘I know you’ve done a lot of interviews, I’ve seen you on Chris Matthews’ show 15 times, but the fact is when you leave this room, you will have said — if we do this right — things you’ve never said before, you will have made connections you have never made before.’”

Kirk says his approach is to hear people out and really try to understand their motivations.

“I’m not there to pull out a piece of paper and say, ‘Aha, I got you, you’re a bad guy.’ I’m there to ask the most sophisticated question, which is, ‘Why?’”