ON THE GROUND IN SOMERS, CT 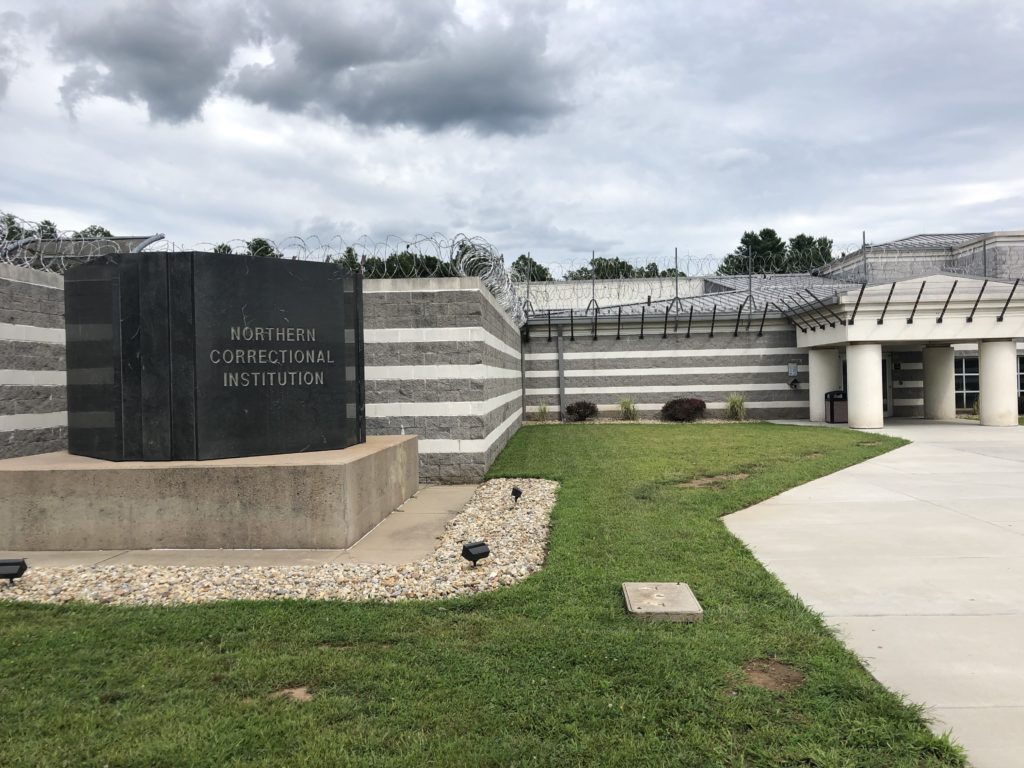 The entrance to the Northern Correctional Institution in Somers, Connecticut. (Photo by Kelan Lyons/GroundTruth)

SOMERS, Conn. — It’s not the rows of barbed wire along the building’s exterior, nor the locked metal door at the entrance. It’s not the buzzer for requesting entry, nor the distinct lack of windows; not the guard at the entrance and not the metal detector. It’s the thick, stale air inside Northern Correctional Institution that cuts you off from the outside world. The trapped oxygen between its silvery, worn floors and ceilings, caught between narrow hallways and cinder-block walls, lock you in.

The prison is a “monument” to another era, when officials locked up the “worst of the worst,” Dan Barrett, American Civil Liberties Union of Connecticut’s legal director told me during the course of my reporting on the facility. “I see Northern as the apex of a failed model.”

There are three penitentiaries in Somers, but none more psychologically isolating than Northern. Prisons aren’t known for their comfort or hospitality, but Northern isn’t just any penitentiary: It’s the most secure in Connecticut, responsible for holding its most dangerous, challenging inmates, particularly those who’ve assaulted fellow inmates or staff in other prisons.

It also houses the several people who were on death row before Connecticut abolished the death penalty in 2012. Those individuals are held under extraordinarily stringent conditions, recently deemed unconstitutional by a federal judge. They must be kept separate from other inmates — their movements closely monitored — and moved to a new cell at least every 90 days. And they’re prohibited from physical contact with visitors, meaning they will never again touch a family member or loved one.

Northern was completed in 1995, when crime was high and the public demanded that prisons function to punish offenders and keep communities safe. Its architecture reflects those philosophies. As you pass the security checkpoint, and even as you enter the above-ground facility, you sense that you’re descending into some subterranean world, or tomb.

Some inmates are locked in their 12-by-7-foot cells for more than 22 hours a day, enclosed in a concrete room the size of a parking space, behind a metal door and a 3-inch-wide window. The uniformly gray cells often smell like feces because of plumbing issues. The best chance inmates have of interacting with each other is through the vents and crevices in their cell walls, or during the precious little time they get outside, where they’re given access to a recreational area with a basketball rim surrounded on all sides by concrete.

But the penitentiary’s guarded, bunker-like mass belies its hushed corridors and empty housing units, underscoring its declining population. Northern now holds the fewest people of any of Connecticut’s 15 occupied prisons. At its population peak, in January of 2003, the facility held 510 inmates. As of August 2019, it holds only 76, a dramatic decrease from January of last year, when it had 270.

Northern’s population decline mirrors broader decarceration trends both in specific prisons and in the state’s entire corrections system, dovetailing with a 26% drop in index crimes (the eight that the FBI measures for its annual index) between 2008 and 2017.

Many of Connecticut’s criminal justice reforms, implemented under the leadership of former Gov. Dannel Malloy, appear to be working. Under his administration, the state abolished the death penalty, raised the age at which juveniles are tried as adults, decriminalized small amounts of cannabis, reformed pardon and parole systems, and reduced penalties for nonviolent crimes.

Many inmates who were at Northern at the beginning of 2019 were not simply released; they were sent to other prisons, allowing officials to close two of Northern’s six housing units. Relocated to other correctional institutions, those inmates are no longer festering between Northern’s charcoal halls and cells. They may even be able to go outside and breathe fresh air.

As Connecticut moves away from the “lock ’em up and throw away the key” ethos of the tough-on-crime era, there are still concerns it isn’t doing enough to help the overwhelming majority of Connecticut inmates who will one day be released from prison.

Formerly incarcerated people across the country frequently face staggering social and economic barriers after they’re released, including discrimination when they apply for jobs or an apartment. This makes it difficult for them to secure basic life insurance, obtain licensure in their preferred field or earn enough money to live above the poverty line.

In the upcoming legislative session, lawmakers will consider further policy changes to the state’s criminal justice system, and advocates hope they’ll consider the experiences of the formerly incarcerated as they do.

Kelan Lyons is a Report for America corps member, covering criminal justice for the Connecticut Mirror. This dispatch is part of a series called “On the Ground,” supported by The GroundTruth Project. Follow him on Twitter: @Kelan_Lyons

A version of this story appeared on USA TODAY on January 29, 2020