Why the Congressional baseball shooting is, sadly, so American 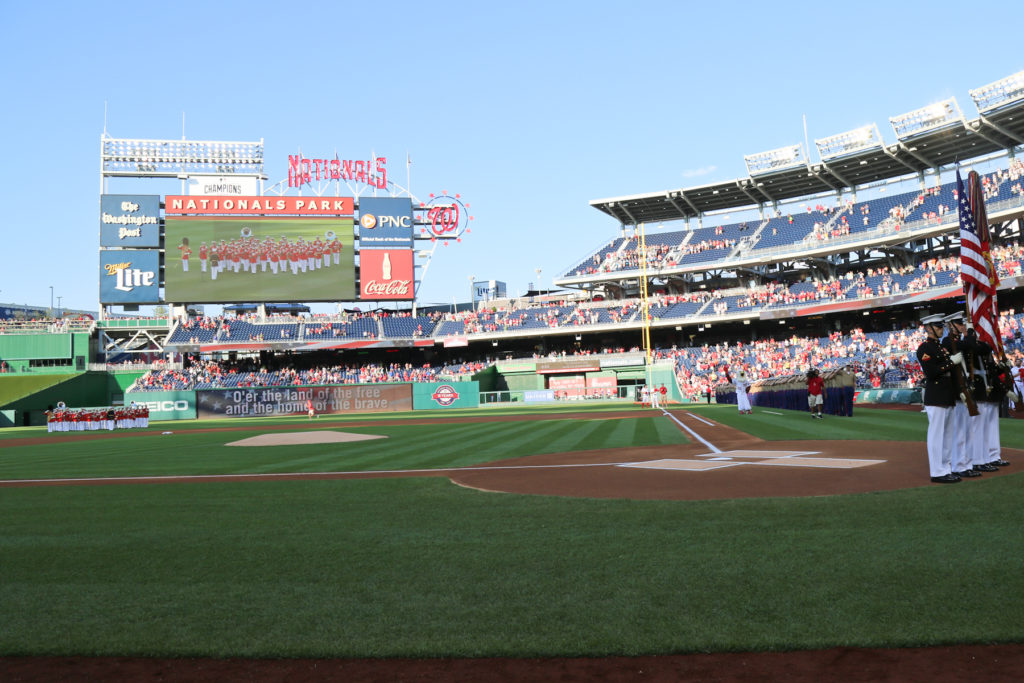 The US Marine Band plays the national anthem at Nationals Park in Washington, D.C. (Photo courtesy of the U.S. Marine Band)

WASHINGTON — The early-morning barrage of rifle fire on a Virginia baseball field not far from the capital echoed across the country.

We’ve all become somewhat numb to the senseless violence of mass shootings in America, but the targeting of Republican lawmakers as they practiced for an annual Congressional Baseball Game Wednesday struck a sharp chord of anger, nostalgia and fear. It seemed to put the deepening divisions in our country squarely in the crosshairs of public debate.

It humbled officials who’d been out playing a friendly game on a gorgeous day. It showed a vulnerable side of leadership at a time when public trust in Congress is historically low. And it again called into question the gridlock on gun control in a country where gun violence is more pervasive than any other.

Soon after four people including House Majority Whip Rep. Steve Scalise were shot at the ball field in Alexandria, a team of Congressional Democrats practicing at Gallaudet University offered a prayer for their colleagues as they “sheltered in place,” a phrase now part of the American vernacular the way “duck and cover” was during the Cold War era of nuclear fear.

Congressmen who escaped injury served as witnesses for TV crews as the gears of public opinion began to turn.

Ohio Rep. Brad Wenstrup, an army veteran, said it was like “being in Iraq again, only without his weapon.”

NPR reporter Susan Davis tweeted, “I can’t overstate how shaken and emotional lawmakers are today. Everyone I’ve interviewed has broken into tears discussing the shooting.”

Though we know from 9/11 and other national tragedies that windows of shared emotion and common interest seem to close very quickly, we must learn where we can.

Former Democratic Rep. Gabby Giffords, herself gravely injured in an assassination attempt while meeting constituents outside a Safeway in Tucson in 2011, quickly issued a statement of condemnation and unity in the wake of the shooting.

“It doesn’t matter if you’re a Democrat or a Republican,” she said. “If you serve the institution of Congress, you’re connected to your colleagues … by a shared sense of service to ideals far greater than yourself. This shooting is an attack on all who serve and on all who participate in our democracy.”

The alleged attacker was James Hodgkinson, a 66-year-old home inspector from Belleville, Illinois who was killed by police after firing dozens of shots.

Hodgkinson was known as an angry man with a record of violence who harbored deep suspicions about the government and deep resentment about widening inequality in America. The weapon used in the shooting was purchased legally, law enforcement sources say.

And despite the stirring words from leaders like Giffords on both sides of the aisle, Hodgkinson’s political affiliations quickly became ammunition in a public barrage of blame.

That Hodgkinson supported Sen. Bernie Sanders and vehemently opposed President Donald Trump was enough for former Speaker of the House Newt Gingrich to attribute the shooting to a pattern of “hostility on the left” and for the fringe website InfoWars to declare: “FIRST SHOTS FIRED IN SECOND US CIVIL WAR! WHAT WILL YOU DO?”

Fox News’ Sean Hannity hosted a special episode from the baseball field focused on “left-wing hate.” Republican Rep. Steve King found a way to blame President Obama for the shooting, saying, “He focused on our differences rather than our things that unify us. And this is some of the fruits of that labor.”

This narrative attempts to obscure the reality that political violence in America has often come from the right. Since 2001, attacks inspired by far-right ideology have surged to more than 300 per year, reports terrorism expert and UMass-Lowell professor Arie Perliger. And the violence has only worsened since the election of President Trump, as a renewed culture of violence supports a spike in hate crimes.

Democratic and Republican leaders acknowledged that attacks like the one in Arlington are the direct result of a more vicious rhetoric that defined the 2016 presidential election and has continued.

“I would argue that the president is at least partially — not totally, but partially — to blame for demons that have been unleashed,” said Republican Rep. Mark Sanford on Thursday morning. “The fact that you have the top guy saying, ‘I wish I can hit you in the face, why don’t you and I’ll pay your legal fees.’”

Trump’s contribution to a spike in hate crimes in the U.S. adds to a culture of violence. The frequency of mass shootings has steadily increased over the last few decades, and they happen more often here than in any other country. We also own more guns per capita than any other country in the world. Meanwhile bipartisan public support for more gun control has not translated into legislation requiring strict background checks for all buyers, for example, or preventing people with mental illness from acquiring them.

The Congressional Baseball Game for which Scalise and his colleagues were practicing is still on — Thursday evening at Nationals Park. But fans and dignitaries will arrive with the creeping knowledge that we are playing defense against a metastasizing culture of violence that is uniquely American. And those who contribute to that culture are responsible for its consequences.