Community journalism wisdom from Kentucky (and why local reporting matters) 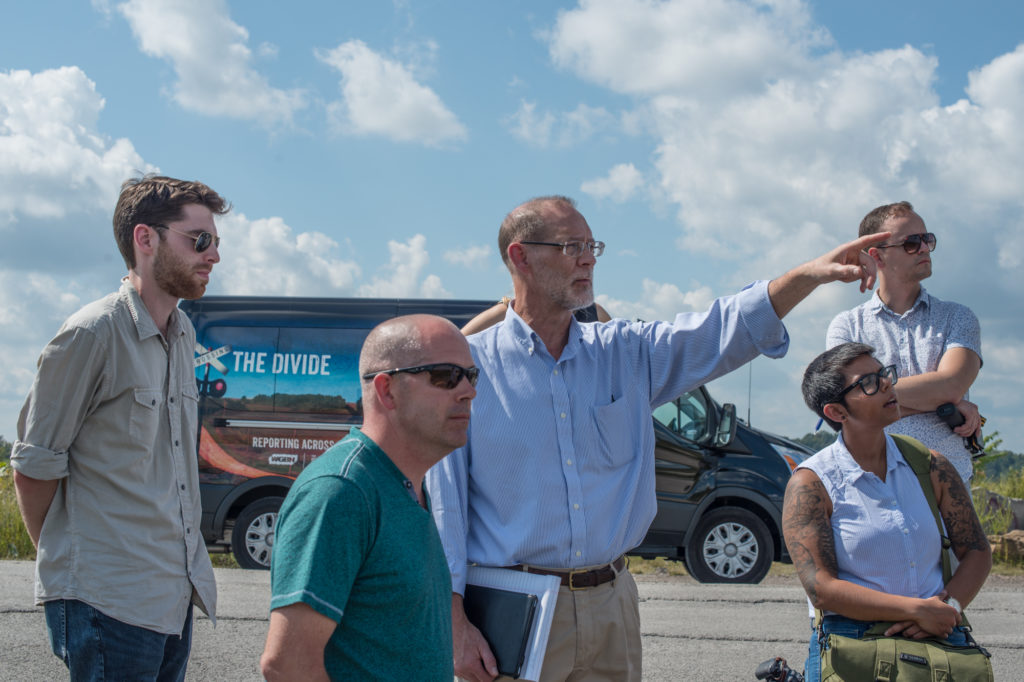 After two and a half months on the road, we are wrapping up the Crossing the Divide road trip this week. In each location across the country, we partnered with local newsrooms and bounced ideas off veteran reporters, to make sure we were on the right track.

One of the reporters who really struck a chord with us was Bill Estep, a veteran reporter at the Lexington Herald-Leader. Bill is a native of Eastern Kentucky, and has spent the bulk of his career covering the community he lives in.

Bill took us on a journey through Eastern Kentucky — from a former strip mine to the health clinic of legendary Appalachian advocate Eula Hall. She created the model for providing rural healthcare and lobbied for better government programs in Eastern Kentucky.

I was in awe of Bill’s expertise about Eastern Kentucky, a region that has been misrepresented and misunderstood by the national media, and his willingness to share that knowledge with a group of young, out-of-town reporters.

In 30 years of reporting on Eastern and Southern Kentucky, Bill has not lost his curiosity or his sense of public service. I certainly look up to Bill as a model for how I’d like to conduct myself in my career.

I hope this excerpted interview with Bill helps you think about the shape your career could take, especially if you’re interested in living and reporting in a community that is rural or often overlooked.

QK: What work have you done that you’re most proud of?

BE: We published a series of stories [in 1989 about Kentucky’s school system].

Kentucky, at that time, had one of the worst rated public school systems in the nation, especially in rural Kentucky.

The schools were very badly funded and the quality of education was just not very good. [Our series] looked at a lot of those problems in terms of corruption, in terms of nepotism — people hiring unqualified people to teach just because they were related to somebody — problems of property not being properly assessed. There was a big problem in Eastern Kentucky of county tax assessors not valuing property properly — not placing a high enough value on it — which meant taxes were lower. And they did that as a political function — they would keep people’s taxes low so that the people in turn would vote to have them re-elected.

It was a finalist for a Pulitzer Prize, and it helped. The next year, in 1990, the state legislature passed an education reform act that at the time was a model for the nation.

The legislature approved a billion dollars in new taxes — in a very rural, poor state, a billion dollars was a significant amount of money to pump into the schools. And that series helped make the case for that law to be passed. And that’s something I’m proud of, because there’s been more than a generation of kids since then who have gotten a better education in Kentucky.

Even though the Herald-Leader is a mid-size daily, you can still have a big impact on public policy and problems in your state at just about any size newspaper where you are.

QK: How’d you get your start in journalism?

BE: I started high school the same year, in 1974, when Richard Nixon resigned as a result of the Watergate scandal. And it was a pretty exciting time in journalism — a lot of people were drawn into the business because of they saw the ability to do that kind of public service and hold public officials accountable.

QK: What were the difficulties or challenges with starting your career?

BE: My first job was at a newspaper where there were three people, so you don’t have a backup or a lot of support. As a young reporter, especially in that kind of situation, if you’re working in a small office, there are going to be times when questions or situations arise. Some advertiser is mad, some source is mad, maybe you have questions about legalities, which you don’t have a lot of experience with yet.

You might be in situations where you feel like you don’t know what to do, or you don’t have the knowledge to handle a situation.

The other thing you run into with smaller newspapers — there’s not a lot of resources in terms of training, additional education. They’re not going to send you to take part in conferences or those sorts of things where you’re going to learn some other skills there. So one of the drawbacks is you’re going to be a little bit more on your own.

And it also helps if you can look for a mentor at a larger newspaper. There’s a newspaper in Eastern Kentucky that’s very small — I think they have a staff of two reporters. I met one of the reporters at an event a few months ago, and he asked if he could bounce things off of me on occassion and I told him, “Sure.” So I’m trying to be a little bit of a mentor to him.

Sometimes [a mentor] can be a professor at [journalism school] … Keep that relationship with some of your professors so you can call and check with them.

It is a good resource, even at a small newspaper, if you can be a member of a professional organization, like Investigative Reporters and Editors or Society for Professional Journalists.

QK: What’s difficult about reporting in the community you’re living in, and where you have a long history?

When you work in a small community, you’re obviously much closer to the people you cover. There’s no insulation, there’s no barrier, there’s no anonymity. When you work in a larger city, there are going to be people in your beat who you deal with over and over, and they may be mad at you from time to time over something you write. But in most of those places, they understand that it’s part of the job.

But in rural places and smaller communities, everything is more personal — because you know a lot more people and more people know you. So you can get into a situation where it might be uncomfortable holding people to account. If it’s so uncomfortable that you can’t do it honestly, then you can’t do that story. That becomes a conflict of interest.

You do the job as honestly as you can. You don’t sandbag people, you don’t ambush people, you talk to them honestly. You be as fair as you can, and let the facts dictate what happens.

QK: Did you ever want to work in a bigger city, for a big newspaper?

BE: I grew up in Kentucky. I live in the town where I grew up. So it’s the place that I’ve always cared about. I have had some opportunities — I’ve been recruited at times to move to other newspapers.

But this is the place that I care the most about. I could be a reporter in some other city — it’s not that I don’t care about what happens in Atlanta or Dallas, we all should care what happens everywhere. But the place I care most about is right here. It’s where I live, it’s where my family lives. It’s the place I want to be better, and help be better through reporting, if I can do that. So I never seriously entertained the idea of leaving it.

I would add one reason for [not leaving] is because [the Herald-Leader] allows some really good opportunities to provide some really good coverage in a place that I care about. I wouldn’t have wanted to stay forever at the weekly paper where I started because, in those days, the pay was pretty low. There is an interest in moving up for better pay, or a job where you can do bigger stories if that’s what you want to do.

But to me there is a tremendous amount of value in being a good reporter even at a very small newspaper. Because those communities need that kind of coverage just as badly as Boston or Los Angeles. Every place needs — in my estimation — good, honest and objective news coverage. And that’s a thing that’s becoming, sadly, more and more difficult to come by.

I feel incredibly lucky that I’ve been able to stay in the place that I care about and do the kind of work I’ve done as well.