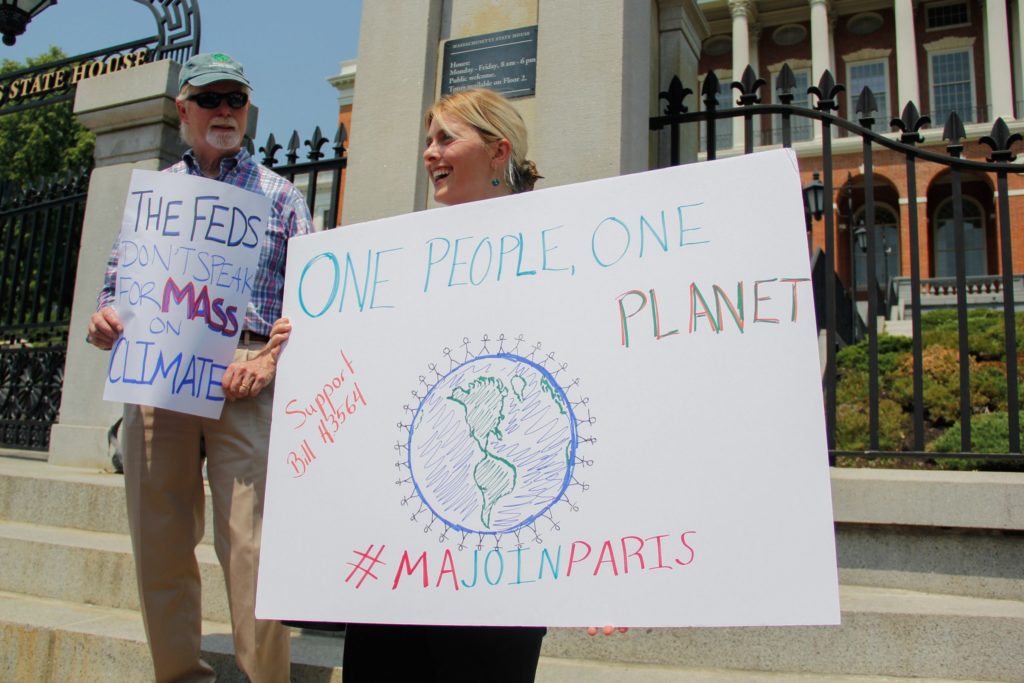 Holding signs that read “There is no Planet B” and “Make Humanity Great,” citizens and lawmakers gathered on the steps of the Massachusetts State House last week under a blistering afternoon sun. They were advocating for a bill that would hold Massachusetts to the guidelines set forth in the Paris Climate Agreement.

State Representative Dylan Fernandes sponsored the bill and the rally.

“As the federal government takes a giant step back, it’s time for Massachusetts to step up and lead,” he said. “It’s time that we sent a message to the nation, to the rest of the world: the handful of climate deniers in Washington, D.C. do not speak for the people of Massachusetts.”

President Donald Trump announced on June 1 that he would officially withdraw the United States from the Paris Climate Agreement, joining Syria and Nicaragua as the only countries who are not party to it.

Trump has said the U.S. may renegotiate the Paris Agreement to reach terms more favorable for the country.

Dr. Phil Duffy, director of the Woods Hole Research Center and one of the speakers at the rally, said Trump’s statement shows he “hasn’t the faintest notion how the agreement actually works.”

Duffy explained that the agreement wasn’t negotiated. Instead, participating countries each made a commitment to reduce greenhouse gas emissions, decided for themselves how large the reduction would be, and pledged to report its goals to the United Nations.

“When Donald Trump talks about renegotiating the Paris Climate Agreement, that doesn’t make any sense, because our commitment was never negotiated in the first place,” Duffy said. “And if he thinks it’s too difficult, if he thinks we can’t make that commitment, he can simply change it at any time.”

Trump’s decision to withdraw came as no surprise to many lawmakers, since it fulfilled his campaign promise. More than a month before Trump was sworn into office, Jessica Lambert, chief information officer at Next Generation Energy Initiative, began writing the Massachusetts legislation.

“It seemed clear that the leadership at the federal level, specifically in the executive branch… was not going to perceive climate change as something that was a priority,” Lambert said. “I think it is essential for this generation and future generations, for us to have the ability to have this kind of legislation and to prove to the world that we have leadership in the United States that…sees this necessity.”

Immediately following Trump’s announcement, the Governors of New York, California and Washington formed the U.S. Climate Alliance. Twelve states, including Massachusetts, and the U.S. territory of Puerto Rico have joined the coalition and pledged to uphold the standards of the Paris Agreement. The Massachusetts bill would turn that pledge into state law and would ensure that Massachusetts adopts policies that meet or exceed the guidelines set forth in the Paris Agreement.

States in the coalition represent just under one third of the United States population, or about 102 million people.

Although the U.S. pulled out of the Paris Agreement, the United Nation’s Non-State Actor Zone for Climate Action (NAZCA) could allow individual states to enter into a similar agreement. Designed for companies and other non-government entities to commit themselves to the cause, it could potentially allows states to submit their own pledges to reduce carbon emissions and combat climate change.

Dr. David Cash, dean of the McCormack Graduate School of Policy and Global Studies at UMass Boston, said this is a chance for states to take the lead.

“The states have always been a laboratory for this kind of innovation,” Cash said. “I think states are saying, ‘Wait a minute, we don’t have a tailwind from the federal government anymore. This is something really important to us, both for protecting the environment, protecting future generations and seizing economic opportunities. So we had better do something about it.’”

Additionally, over 300 mayors have signed on to the Mayors National Climate Action Agenda, committing their cities to climate goals.

Although the Massachusetts bill has bipartisan support and is expected to pass, speakers at the rally still urged community involvement with lawmakers.

Cash, the UMass Boston dean, says Massachusetts has had success in climate change policy because the state is more politically progressive.

“The way climate has been framed in the last eight years or so is along party lines,” Cash said. “It’s along progressive versus conservative lines. And so there are many states that have not had the same kind of political leadership to drive a clean energy or climate agenda.”

Massachusetts has been a part of the Regional Greenhouse Gas Initiative for almost 10 years. RGGI, pronounced “Reggie,” is a program that caps greenhouse gas emissions from power plants.

“Studies of RGGI have shown that in addition to reducing climate change it has positive economic benefits, increased economic activity, job growth and billions of dollars in saved health care costs,” Duffy said.

Duffy cited this as evidence that it’s possible to combat climate change and have a strong economy, something he says Trump doesn’t believe is possible.