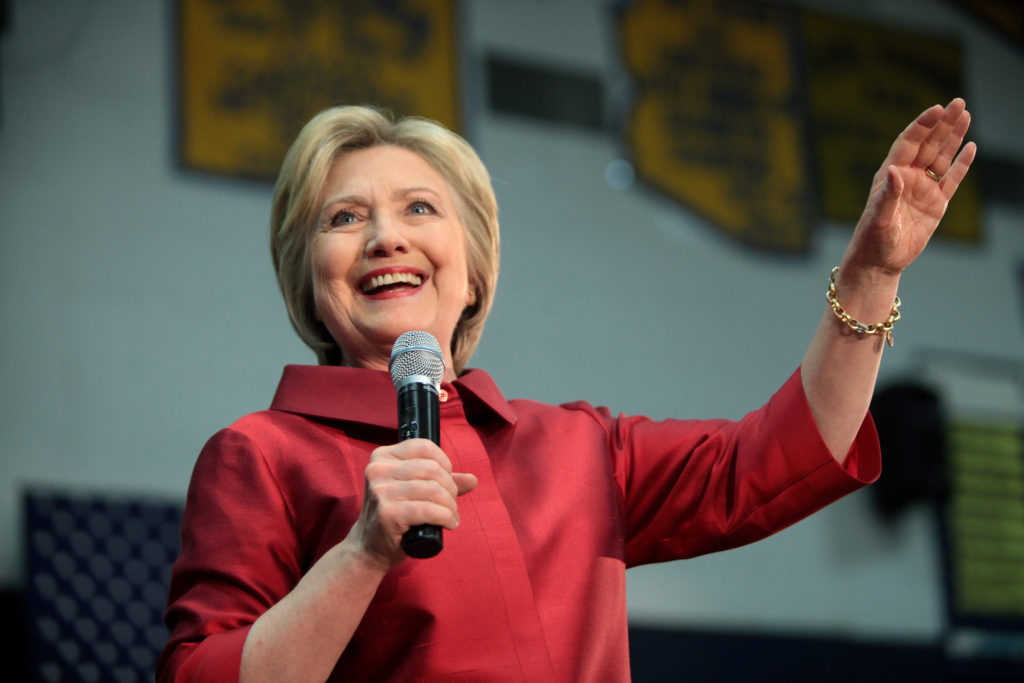 Hillary Clinton speaks at the "Get Out the Caucus" rally, located at Valley Southwoods Freshman High School in West Des Moines, Iowa, in 2016. (Photo by Gage Skidmore/Flickr User)

“You want something to vote for, not just against,” she said. “Optimism, not resentment. Answers, not anger. Ideas, not insults. Bridges, not walls. You’re also here because you know this election isn’t a reality TV show. It shouldn’t be about birth certificates or name-calling or stunts to get onto cable news.”

Clinton’s speech came on the heels of new polls showing her losing support amongst millennials, a voting bloc that says it doesn’t trust her. According to a recent Gallup poll, her favorability rating is dropping among young adults ages 18-29.

And although Clinton’s Democratic primary opponent, Bernie Sanders, has campaigned for her in an effort to pass along his popularity among millennials, she hasn’t been able to shake off her reputation as an embodiment of the establishment, which millennials also do not trust.

According to a 2015 study by the Harvard Institute of Politics, 74 percent of millennials sometimes or never trust the federal government to do the right thing.

Clinton offered high praise for her target audience, which she called “the most inclusive, progressive and entrepreneurial generation we’ve ever seen.” She stressed the importance of the election as one that will shape millennials’ futures for “the next 50 years.”

She cited higher education, racism and climate change as the three biggest issues concerning young adults and stressed the need to come together across party lines to address them.

“More than previous generations, you understand that all these challenges are intersecting and we must take them on together,” Clinton said.

The millennial generation is politically diverse and approaches politics differently than the generations before them. Skeptical of the future, this generation is feeling the weight of unemployment, climate change and crushing student debt.

Clinton again touted her college affordability plan while declaring that a four-year degree is not the only way to start a career. She plans to give tax credits to institutions that offer apprenticeships in skill-based labor.

Perhaps most importantly, she acknowledged younger voters’ distrust of her and her establishment ties.

“Even if you dislike Trump, you may still have some questions about me. I get that,” Clinton said, “And I want to do my best to answer those questions.”

No matter how much she may prize the millennial vote, however, it’s a generation that doesn’t tend to vote. So as a final point, Clinton urgently stressed the necessity of doing so.

“Not voting is not an option,” she said. “That just plays into Trump’s hands. It really does.”