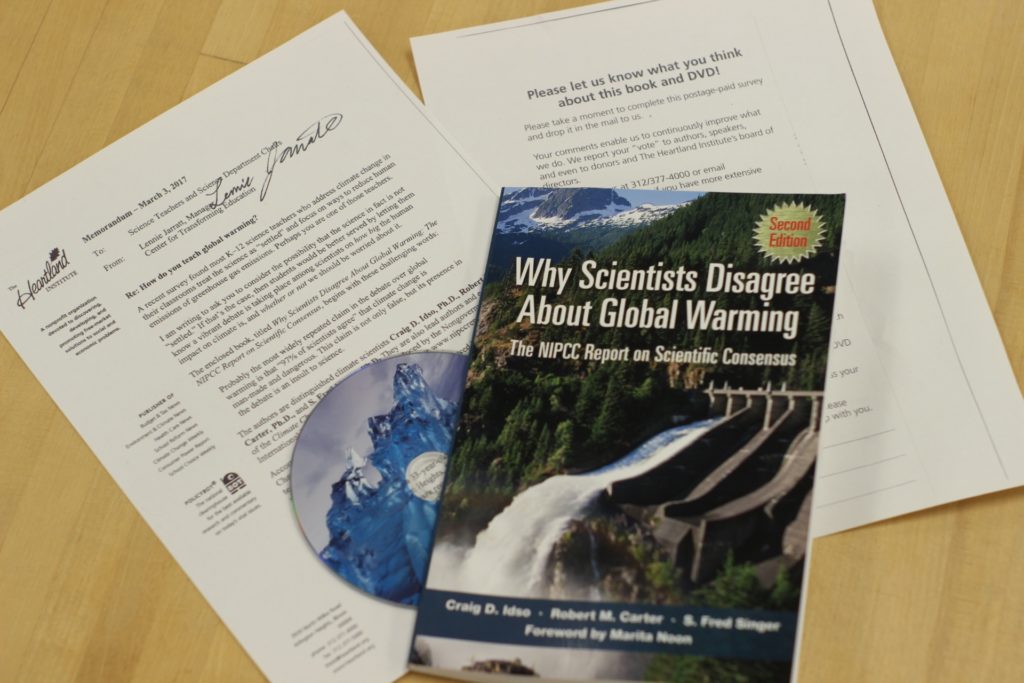 The Heartland Institute says it will send the book "Why Scientists Disagree About Global Warming" to every public school science teacher in the nation. (Photo by Brenna Verre/FRONTLINE)

Twenty-five thousand science teachers opened their mailboxes this month and found a package from the Heartland Institute, a libertarian think tank that rejects the scientific consensus on climate change.

It contained the organization’s book “Why Scientists Disagree About Global Warming,” as well as a DVD rejecting the human role in climate change and arguing instead that rising temperatures have been caused primarily by natural phenomena. The material will be sent to an additional 25,000 teachers every two weeks until every public-school science teacher in the nation has a copy, Heartland president and CEO Joseph Bast said in an interview last week. If so, the campaign would reach more than 200,000 K-12 science teachers.

Accompanying the materials is a cover letter from Lennie Jarratt, project manager of Heartland’s Center for Transforming Education. He asks teachers to “consider the possibility” that the science is not settled. “If that’s the case, then students would be better served by letting them know a vibrant debate is taking place among scientists,” he writes. The letter also points teachers to an online guide to using the DVD in their classrooms.

The Heartland initiative dismisses multiple studies showing scientists are in near unanimous agreement that humans are changing the climate. Even if human activity is contributing to climate change, the book argues, it “would probably not be harmful, because many areas of the world would benefit from or adjust to climate change.”

The campaign elicited immediate derision from the National Center for Science Education (NCSE), a nonprofit in Oakland, California that monitors climate change education in classrooms.

It’s too early to know how the materials will be used in schools around the country. There aren’t uniform standards for teaching climate change, and the subject has caused rigorous debate in some states. Even when it is taught, Reid says, “what goes on behind the classroom door is really up to the teacher.”

The campaign comes at a time when Heartland’s influence on national climate policy is at an apex. Myron Ebell, a leading climate change skeptic and a longtime ally of the Heartland Institute, ran President Donald Trump’s transition efforts for the Environmental Protection Agency. That process led to the appointment of climate change skeptic Scott Pruitt as administrator of the EPA. Pruitt, a former Oklahoma attorney general, has publicly questioned the scientific consensus around climate change, and has brought in like-minded officials who support dismantling policies that curb fossil fuel emissions.

Trump took a major step toward that goal on Tuesday when he signed an executive order rolling back the Clean Power Plan, an Obama administration initiative that aimed to regulate carbon dioxide emissions from power plants.

“We’re getting a lot of requests for expert opinion from the White House,” said Bast. “That’s very new. We haven’t had those calls for eight years. Even 12 years.”

Last week in Washington, D.C., Heartland held its annual conference challenging the idea that there is a scientific consensus on climate change. The conference focused on the future of energy and climate policy under Trump. Bast opened the meeting by saying, “This is a wonderful time to be a global warming realist,” using the term that those in the movement use to describe themselves.

“Those of us in the room who have been working on this issue for a decade or longer can finally stand up and say hallelujah and welcome to the party,” said Bast. He was met with applause from the 200 or so people in the audience.

This isn’t the first time the movement has targeted teachers. As early as 1998, a group of fossil fuel officials, lobbyists and conservative think tanks planned to distribute climate-change skeptical curricula for classrooms nationwide. In 2012, an internal Heartland document outlined plans to do the same.

The author of the survey, Eric Plutzer, professor of political science at Pennsylvania State University, said those results reflect the fact that climate change can be challenging to teach: It doesn’t slide neatly into any of the required sciences, comprising some biology, some chemistry and some physics. Science teachers themselves may not have encountered the science of climate change much in their own education.

Bast said he was not shocked that four in 10 teachers mention or advocate contrarian views, though he hesitated to take credit for it.

Heartland’s mailing campaign began in mid-March. Bast declined to disclose the project cost; the book’s suggested retail price is $6.95. He said the group has been actively fundraising around educational initiatives. The organization’s total budget in 2015, the most recent year available through public filings, was $5.3 million.

Bast said the organization has already received several messages from teachers who appreciated the information, or asked for a Heartland speaker to come to class.

But the campaign is not being well received by everyone.

Lori Baker, a sixth-grade science teacher at North Putnam Middle School in Roachdale, Indiana, found the package in her school mailbox and was dismayed by its contents. “I read quite a bit of the book, actually, and it was extremely frustrating. It’s an attempt to sound science literate, but there’s very little actual data,” she said.

Baker pointed to the first paragraph of the foreword, written by Marita Noon, executive director of Citizens’ Alliance for Responsible Energy, a nonprofit and lobbying group that advocates for the use of fossil fuels. In it, Noon writes that Obama’s description of climate change as the greatest threat facing mankind is “laughable” at a time when “ISIS is beheading innocent people.”

“That as a foreword to something claiming to be scientific is pretty shocking,” said Baker.

Plutzer said the Heartland book is likely to be dismissed out of hand by teachers like Baker, who already view climate change denial as a fringe movement. But it may be welcomed by those already skeptical of the scientific consensus. “This could increase polarization within the science teaching profession, though probably not a great deal.”

That polarization could easily be exacerbated at South Whidbey High School in Washington state, where biology and physics teacher Greg Ballog received the material. Ballog said that one of his colleagues is a “borderline climate denier,” which has already caused tensions in the school’s science department.

“I’m not going to show this stuff to him,” he said. “It’s pretty slick. I think he might use it.”

This story was produced as part of a collaboration between FRONTLINE and The GroundTruth Project examining climate change and its impact on women and children. Katie Worth is FRONTLINE’s inaugural FRONTLINE-Columbia Tow Journalism Fellow.

This story also appeared on FRONTLINE on March 28, 2017