Climate change rears its head on the Tibetan Plateau 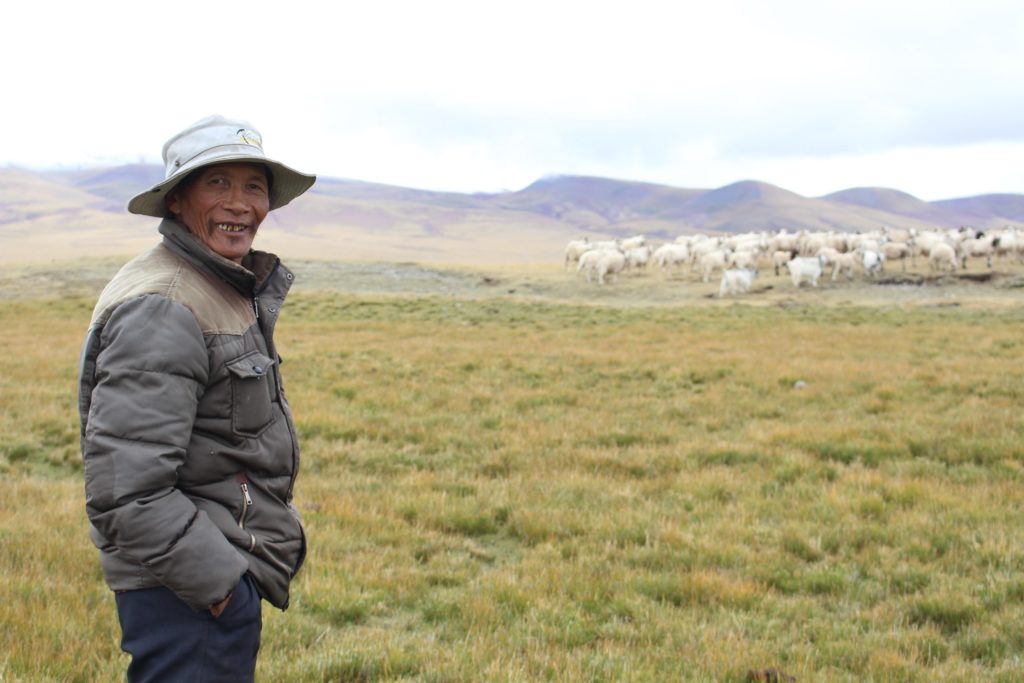 Tsesong a Tibetan herder, on the Qinghai-Tibet Plateau. (Coco Feng)

ZHIDOI COUNTY, China — Tsesong, a 61-year-old Tibetan herder, has been tending livestock successfully on the vast Qinghai-Tibet Plateau since he was a small child. But this year has been unusually difficult; after a late-June rain, it didn’t rain again for two months.

“More than 100 livestock have died because of starvation so far this year,” Tsesong said, a strong, dry wind blowing against the tough wrinkles on his face.

“The grass was thicker before, now it is thinner,” he said, pointing his toes at the ground, where yellow grass adheres to mud, too sparse to cover the whole land.His remaining 50 yaks and 200 goats drift across the plateau, searching in vain for greener grass, growing thinner and less vital each day.

The weight of one yak dropped on average between 20 and 30 kilograms this year, or as much as 18 percent of its normal weight. With yak meat typically selling for $12 per kilogram, a herder like Tsesong stands to lose hundreds of dollars with each malnourished yak.

Tsesong’s pasture is in Zhidoi County in Yushu, Qinghai Province. It’s an area where the Yangtze, Yellow, and Mekong Rivers all originate — called the Three Rivers Headwater Region, or because of its high altitude, the “Water Tower of China.”

The region has been steadily warming. From 1961 to 2012, the temperature here increased 1.9 degrees Celsius, and continues to rise, according to Qinghai Meteorological Authority. The increased temperatures have brought on deteriorating environmental conditions including rising snow lines and more extreme weather, affecting not only the water runoff, but also the lives of more than one million of the area’s herders and villagers.

The one good thing that climate change has brought about, Tsesong said, is that it is warmer now, so he wears fewer clothes, and his ears don’t become as badly frostbitten as before. “But it can’t make up for the loss of my livestock,” he said bitterly.

That global warming is the leading cause of environmental damage in the Three Rivers region has not always been widely accepted, even by Chinese climate scientists.

In the past, more scientists held the opinion that over-grazing was the main cause of increased arid land. The government even launched a grazing ban 10 years ago, enclosing some pastures for protection and relocating more than 55,000 nomadic herder families to a nearby town.

But over-grazing was a story that was more relevant in the 1970s, according to environmental activists. Lü Zhi, founder of the Shan Shui Conservation Center, an NGO that has worked on protecting the Three Rivers Headwater Region, told Chinese media that the number of livestock in Yushu reached its peak in 1979, steadily declining since then.

In a recent study, scientists from the Northwest Institute of Plateau Biology of the Chinese Academy of Sciences conducted an experiment to test whether climate change was indeed causing the drought instead.

They set up a glass room equipped with a temperature controlling device on the plateau, in an environment similar to the Three Rivers, and they turned the temperature 2 degrees higher than the natural one. The land became more lush for the first two years, because it was warmer. But starting in the third year, the level of biodiversity deteriorated because of a large-scale evaporation that caused drought.

The experiment, conducted in an environment without human activity, proved that warming could cause drought and a deteriorating environment, the scientists concluded.

In recognition of the region’s growing environmental problem, the Qinghai Meteorological Authority set up in 2008 a center to monitor climate change within the province. The center was also responsible for conducting cloud seeding to make artificial rains when there is drought, especially in the Three Rivers region, according to Xinhua News Agency.

The government has also strived to adapt to climate change in other ways. In 2005, Qinghai Authority started the “Ecological Protection and Construction Project in the Three Rivers Headwater Region” under the guidance of the state council. The first phase of the project included measures like placing a grazing ban in some areas, providing cloud seeding, and prioritizing wetlands restoration.

Faced with a warming climate, mainly caused by greenhouse gases like carbon dioxide, Qinghai Province also now uses the largest percentage of clean energy among all the provinces of China in an effort to cut carbon emissions. Provincial leaders will continue to push for national support, as they say they can’t do it alone.

This story is part of a reporting partnership between The GroundTruth Project and The University of Hong Kong’s Journalism and Media Studies Centre. Read more from this series, Beijing Haze.