In Antarctica, searing images and a wave of change 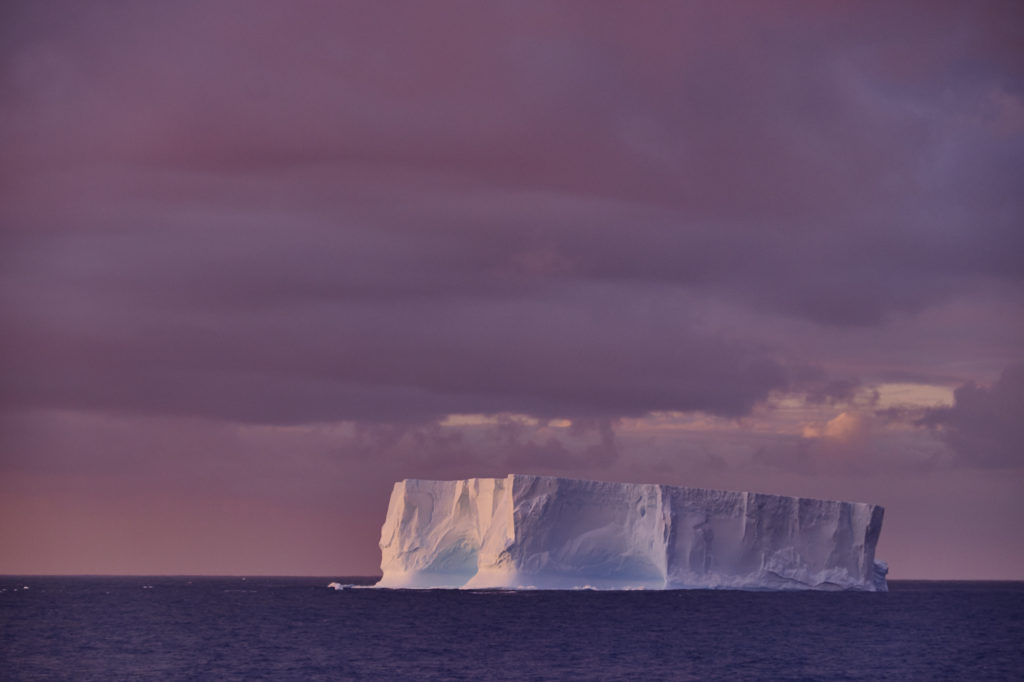 Tabular icebergs, recognizable by their cliff-like sides and flat tops, are typically taller than an apartment building and longer than a city block. (Photo by Oliver Wheeldon/2041 Foundation)

NEKO HARBOR, Antarctica — The Zodiac pushed through the drift ice as we gazed up at icebergs that reflected and refracted the sunlight, magnifying their color to an opaque blue that emanates from the core of the iceberg.

Our guide, Colin Souness, a glaciologist, took us through the open water, edging around the larger ice floes. He pointed out a large tabular iceberg, which we travelled alongside. He explained to us that these types of icebergs, recognizable by their cliff-like sides and flat top, are typically taller than an apartment building and longer than a city block. They are also the most ominous of icebergs, as they represent parts of ice shelves that have broken off.

The ice shelf is important, Colin told us, as it holds back the larger glacial ice sheet. Without the support of the shelf, the ice sheet would inexorably flow into the ocean, contributing to sea level rise.

As we rounded the backside of the iceberg, we motored into a cove on the side of Neko Harbor. We ran the Zodiac up onto the rough stony beach, sending a few frightened penguins running, squawking at the intrusion.

We disembarked and began struggling up the beach, sliding on slick and icy seaweed. We walked past scores of sorry-looking, molting penguins huddled behind outcroppings, preening and pecking at their downy feathers. We navigated our way up the steep trail, angling for the top of the glacier, slipping in our rubber boots as we tried to gain traction on the ice.

As we stood at the top of the hill, we surveyed Neko Harbor. Suddenly, we heard a crack like a gunshot cut through the cold air. In unison we all turned to see a thick white plume of ice crystals bellowing out from the mountainside. Then a 10-story-high chunk of ice, which had calved from the side of the ice shelf, punched through the icy mist to land in the water below.

It was our ninth day traveling around the Antarctic Peninsula and each day had brought something new and more amazing. We had seen pods of orcas racing alongside our ship, enormous fields of towering tabular icebergs drifting by and swarms of penguins populating the icy coastline.

This was the International Antarctic Expedition 2016. There were 130 people from 30 different nations who had arrived to become climate “ambassadors.” We were there to take part in this leadership journey with renowned polar explorer Robert Swan, the first man to have walked unassisted to both the North and South Pole. Upon his return he started his foundation, 2041, which is the year the treaty protecting Antarctica from mining and exploitation expires. He aims to extend the treaty indefinitely by raising enough awareness to create a permanent wilderness.

One of the most searing images from our trip was watching that enormous chunk of ice calving from the ice shelf. As it splashed into the deep blue harbor, we could see the cold water quickly close in over the intrusion. Like waves in a storm, the water sped the few hundred meters to the rocky outgrowth before cresting into one large 10-foot wave that crashed up onto the land and washed over the beach. Standing above all the action, we watched as the water chased the waddling penguins from the shoreline. As the only permanent land residents of Antarctica, penguins bear the immediate brunt of climate change. Yet, as this wave of change sweeps out from the harbor to impact the globe, the penguins will no longer be the only ones affected.

As this newly formed iceberg melts, it will be part of a process that is diminishing Antarctica’s ability to aid in cooling the planet. Oceanographer and sea ice physicist Ted Maksym of Woods Hole Oceanographic Institution described the polar ice caps as Earth’s sunscreen, reflecting the heat of the sun. Without the ice locking in this water, there will be a global rise in sea levels. That single act will contribute to the impacts of climate change, from hurricanes in the Philippines and coastal flooding in the United States, to heat waves and droughts in the Middle East and Africa.

It was our chance to witness an effect of climate change firsthand and to raise awareness for the potentially disastrous scenarios ahead. The effects will not be stopped unless the global community unites to push back against the wave.