Climate activists go without food to make a point at COP21 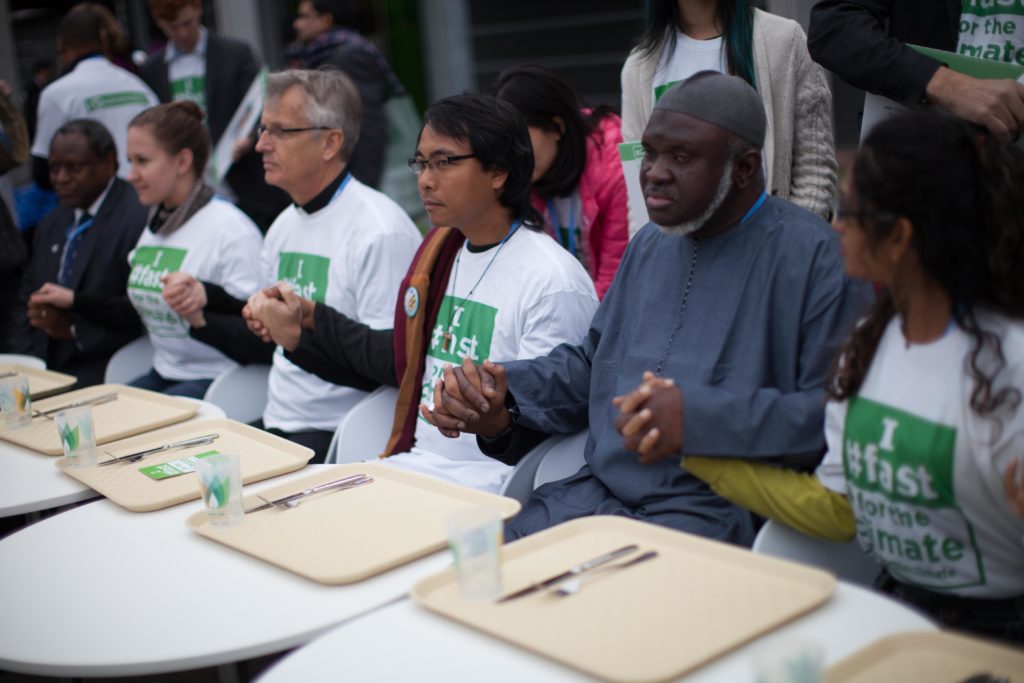 Faith leaders take part in a climate demonstration inside the UN climate talks in Paris.

LE BOURGET, France — The contingency of 20 delegates in T-shirts and clerical collars sat at a cafeteria table set with silverware and empty lunch trays.

As hordes of busy delegates weathered long lines for overpriced food Tuesday, the group of climate activists gathered inside the restricted Blue Zone of the international climate conference at Le Bourget, members of  a movement called Fast for the Climate. They said they chose to go hungry in a show of unity across faiths and with those most affected by climate change — and to push negotiators to reach a deal. According to organizers, thousands of people from 90 countries made a commitment online or at the conference to fast for one of the the first days of negotiations.

The movement began with Yeb Sano, a Filipino climate activist whose brother was nearly killed by Typhoon Haiyan while Sano served as the country’s lead negotiator during COP19 in Warsaw in November 2013.

Remaining in Warsaw after the storm, Sano made an emotional plea to the conference in which he said, “This process has been called a farce. It has been called an annual carbon intensive gathering of useless frequent flyers.” He also pledged to fast until negotiators reached a meaningful agreement and went 14 days without eating.

Typhoon Haiyan, considered the strongest storm to ever hit land, killed more than 6,000 people and displaced close to 4 million. Since then, “climate fasters” have joined Sano in fasting for 24 hours on the first day of each month.

The fast at the climate conference COP21, concludes Sano’s most recent act of endurance, walking 900 miles over 60 days from Rome to Paris as part of a “People’s Pilgrimage.” Once in Paris, Sano pushed through fatigue and lightheadedness to persevere through a constant schedule of demonstrations, panels, media interviews and emails sent well past midnight.

But for Sano, it’s all a small sacrifice for his cause. “The fast is something that is really easy to do, especially when you take into perspective the suffering of people who face climate impacts all over the world — refugees, migrants, they go through much harder things than missing food for one day,” Sano said.

Fasting has become a symbol of faith communities uniting to stand against climate change. Aside from being an act of solidarity with people who are being adversely impacted by climate change around the world, Sano said it is “also a form of prayer for protecting these people and safeguarding their futures. It includes a prayer that world leaders gathered in Paris take this issue much more seriously and take urgent ambitious action.”

While in Rome, Sano met with Pope Francis, who released an encyclical on environment this summer calling for action on climate change. In August, Islamic faith leaders announced a declaration on climate change, asking Muslims worldwide to support a strong agreement in Paris.

Bishop Efraim Tendero was another “climate faster” who traveled from the Philippines to COP21 to advocate on behalf of the World Evangelical Alliance.

“Fasting is giving up something which is very important to you, in order to accomplish what is of greater significance. Food is very important, but you give up food because of the message of asking people to address climate change,” Tendero said.

The bishop traveled to the worst hit city of Tacloban a few days after Typhoon Haiyan subsided. “It was like seeing a city that was hit by an atomic bomb,” said Tendero. He worked with an organization called Tearfund to provide food, shelter, disaster preparedness and trauma counseling to survivors.

Tearfund, a Christian development NGO who also participated in the fast, partnered with local churches in the Philippines for close to 20 years until deciding in 2000 that the country was developing enough that the group’s presence was not as critical. That changed in 2013 with Typhoon Haiyan.  “That shows that the typhoon has brought us backwards,” said Tendero. “You can see how climate change has that kind of negative impact, not only in the individual lives but to the nation as a whole.”

Tearfund is lobbying to push COP negotiators to reach an even more ambitious goal of capping global warming to just 1.5 degrees Celcius — compared to the 2-degree goal that already appears to be out of reach. . The group also seeks  legally binding agreement with mechanisms to evaluate and scale up commitments every five years, as well as $100 billion a year of funding by 2020 to help poor nations respond and adapt to climate change.

“I’ve been to the other COPs and this one feels different,” said Paul Cook, advocacy director for Tearfund, “There’s an atmosphere of potential hope here.”

On Tuesday the climate fasters ended the day with a dinner of local, seasonal vegetarian food cooked by Climate Delicious (Bon pour le climat) at Foyer de Grenelle, a Christian-inspired center that provides meals and social services.The breaking of the fast symbolized peace in light of the Paris attacks last month.

“Political and religious extremists have attacked the city, hoping to drive a wedge between faiths and peoples,” Fast for the Climate said in a statement on their website. “We must not let this divide us. People of all faiths and none must stand together. Now, more than ever, we must call on the leaders of all states to join as one human family to face the climate crisis.”

Reflecting on the attacks, Sano said that because of climate change, “Human conflict will become more exacerbated. We will have more refugees who escape the horror that they experience in their communities. There will be people who will be fighting for scarce resources in places where you have long droughts like Syria. It is going to get worse.”

Last year, Sano was excluded from the Philippine negotiation team for COP Lima at the last minute without explanation — with many speculating that he was removed for being so outspoken. Now he has traded in his suit and negotiator badge for comfortable walking shoes and a cross worn around his neck. He says he feels empowered to speak freely as a climate activist.

In Paris, Philippine President Benigno Aquino led the Climate Vulnerable Forum at COP21 for nations most in danger from global warming. “I have no strong feelings about any head of state being here because I think all of the speeches I’ve heard are speeches I wish I would have heard 10 years ago,” said Sano. “Walking from Rome to Paris, our message has been it’s time to stop talking, and walk the talk.”