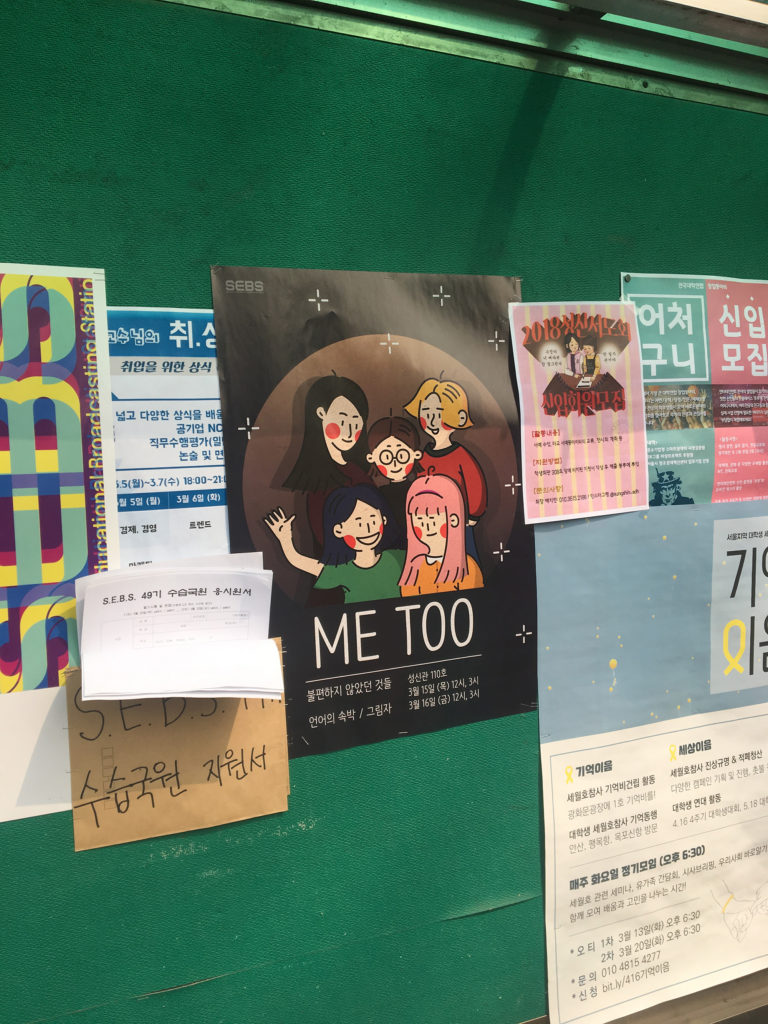 A#MeToo flyer was posted outside campus center at Yonsei University, inviting students to a discussion on the movement. (Tommy Brooksbank/GroundTruth)

SEOUL — It started out as a tweet in the United States just a few months ago. It’s a short, simple statement loaded with the suffering of millions of women that became a rallying cry for change. But the #MeToo movement was never exclusive to the United States. It quickly spread to other countries and has now made its way to Korea, where stories of sexual harassment and assault are being discussed openly- even in places of worship.

“It’s a change from what you would have seen a few months ago,” said Rev. Kate Jihae Park, intern pastor at New Philadelphia Presbyterian Church in Seoul. She’s seen a shift in Korean culture around sexual misconduct, so much so that she thought it was important to address the matter at prayer services and sermons.

“Talking about sexual harassment and assault has long been taboo in South Korean society. We’re hoping to change that,” Park said.

The #MeToo movement started in the United States in October 2017 as a hashtag that was spread virally on social media to demonstrate the extent of sexual misconduct, particularly in the workplace. International use of the hashtag followed soon after, but the movement in South Korea had been slow to gain momentum until January. That’s when a prominent prosecutor, Seo Ji-hyeon, said in a television interview that a former boss had groped her.

Since then a steady stream of women have come forward with accusations of sexual misconduct- mostly on social media. The stories of assault and harassment have led to the resignations of a prominent politician, a Catholic priest, and a female executive of Hyundai Motors. Before Seo, these accounts were rare because many victims believed their allegations would not be taken seriously. A 2015 study by the Korean government found 78 percent of women in the country’s workforce had experienced sexual harassment in some form but chose not to report it because they didn’t think it would make a difference. Seo’s case was a catalyst that encouraged other victims to come forward.

“Her claims of sexual assault shocked people due to her status as a prosecutor,” said Kim Eun-shil, director of the Asian Center for Women’s Studies at Ewha Woman’s University. “Seo had a big-time job and if it could happen to her, it could happen to anyone. People wanted to know what the accusations were about and for the first time, women began to say this is not only a scandal. Sexual assaults like this are a political issue and we need to stop this from happening.”

Park, the intern pastor, agrees and to ensure long-lasting change, she plans to foster open discussions in her congregation so that no one feels uncomfortable talking about previously off-limits subjects.

“Within the church, sometimes those issues are kind of swept under the rug,” Park said. “Some of the time these things are handled quietly but when we see certain movements happening like this, we can’t deny there are so many things that have been hidden in the dark that are finally being exposed. It’s our job to defend those victims who haven’t had a voice for themselves, that’s what Christ has called us to do.”

From sermons to prayer services for victims, the #MeToo movement has a presence at the church. The congregation is particularly well-disposed to the message because it’s mostly made up of Koreans in their mid-20s.

“Our church is full of young adults and has been very receptive since the #MeToo prayer meeting that we had,” Park said. “We’re embracing the community, we’re with them in these trying times and we’re not staying silent.”

The movement is also making waves at churches on college campuses. Rev. Peter Choi is the priest in residence at Yonsei University. He noticed the considerable amount of discussion around #MeToo that has been going on with students and plans on talking about the issue in his homilies throughout the semester.

“It’s healthy to talk about it, especially because the younger generation sees how important it is,” Choi said. “Many students in the church are activists in the movement. They recognize it’s necessary to create positive change and expose the dark side of our society that has been concealed for so long.”

Joanna Lee is one of those students. She says it’s not because of her Catholic values that she wants to be a vocal advocate in the movement. Instead she sees the #MeToo discussion in church as a way of keeping her faith in line with the times.

“Everyone in college talks about the protests and the #MeToo movement, but also the discussion is on feminism in general and where women’s rights should be in South Korea,” Lee said. “It’s the 21st century after all. I’ve talked about it a lot with my friends at church. It’s really good we talk about it at church club meetings because it keeps our faith current.”

Like Lee, Park wants her congregation at New Philadelphia Church to see the #MeToo movement as something to embrace and encourage people to speak out against sexual misconduct. It’s an important part of keeping the church and the country from reverting back to its old ways, when sexual harassment was not taken seriously.

“Talking about the #MeToo movement is a step forward, but we’re only at an early stage of creating change,” Park said. “Hopefully after all these constructive conversations the country will move towards improvement, where women can boldly speak up about these things and can feel safe to open up about sexual assault and harassment that has been done to them.”