Christians in Egypt: A storm within the storm 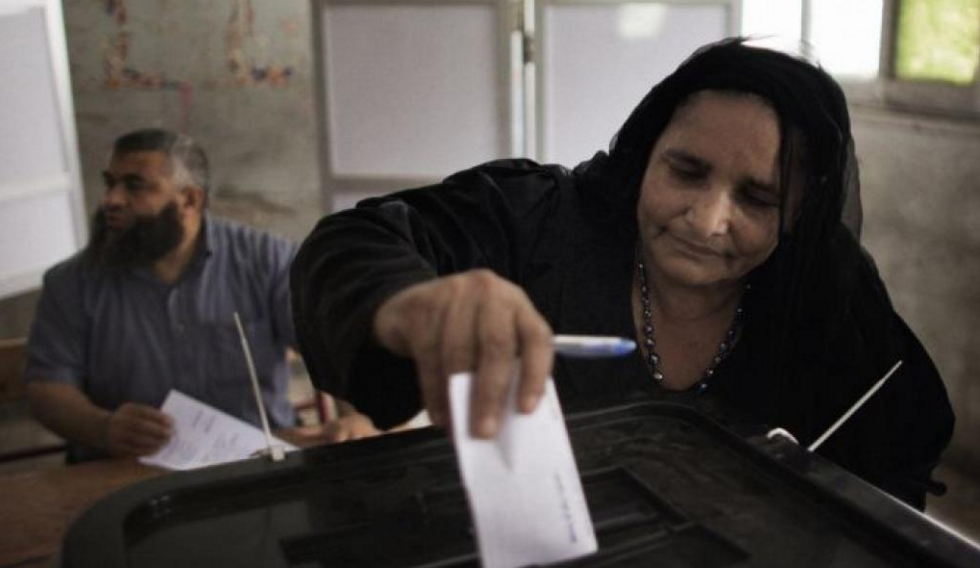 CAIRO – With fluffy beige pillows propped behind her still recovering back, Evon Mossad takes a deep breath and reclines on a velvet couch in her apartment in a middle class suburb of Cairo.

The 53-year-old Coptic Christian woman reflected on what has happened just seven months after an evening of violence which became a defining moment for many in Egypt’s Coptic Christian minority.

“What happened after? Nothing,” says Mossad, who emerged from the incident badly bruised and became an activist and community organizer. “Nothing has changed, except there’s more fear and anxiety.”

Seven months ago, Mossad says she was in the crowd of protesters when she was suddenly assaulted and beaten by an officer who called her an “infidel.” The demonstration erupted into a horrific night of brutality in which 27 people were killed and hundreds injured in clashes between Egyptian security forces and mainly Coptic Christian demonstrators who were protesting against an attack on a church by Islamic extremists.

In Egypt’s sequence of bloody flashpoints since the January 25 uprising, the event is known simply as “Maspero,” the state TV building where demonstrators rallied against what Copts saw as indifference to the attack on a church.

In the aftermath of Maspero, though in great physical pain and mournful over the deaths of friends, Mossad was wheeled around Cairo’s Coptic Hospital, visiting other victims and encouraging them to keep up the fight for their rights. She encouraged them not to lose hope that the violence might produce a productive turning point in Egypt’s often stilted discourse around the rights of its Christian minority.

But, as it turned out, Maspero was not so much a turning point for Copts as it was an open wound, and one that Mossad says is still healing. Copts have suffered discrimination throughout hundreds of years of history in Egypt. Individual Copts have also been great Egyptian nationalists and leading thinkers, industrialists and artists who are frequently quick to point out that Muslims and Christians are like brothers in Egypt. It’s a complex relationship – as fraught as any sibling rivalry. But what is clear as Egypt takes its first faltering steps toward electing a civilian president, is that a democracy and the constitution upon which it is based are defined in how the rights of minorities are protected. Today Copts are left wondering and worrying about their place in a new Egypt.

Sporadic but intense demonstrations over the past year reflect mounting fears in Egypt’s Coptic community (who make up an estimated 5 to10 percent of Egypt’s total population) and its Diaspora that after the country’s uprising, the predominantly Muslim Egyptian society seems as indifferent to the Christian minority’s concerns as ever. And with the recent death of Pope Shenouda III last March after 40 years at the helm of the Middle East’s largest Christian community, many Copts are looking for a leader who can help redefine their community’s role in a rapidly changing, increasingly Islamist post-Mubarak Egypt.

“You can call us orphans,” Mossad says with a bitter laugh.

On the eve of the nation’s first free presidential elections, Mossad still finds herself struggling to stand after back surgery and extensive physical therapy. But her hardest struggle, she says, is encouraging her fellow Copts to stand up for their rights.

“We have no real presidential candidates. It’s either ex-regime officials or Islamists. We’re between a rock and a hard place,” she bemoans. “No one is talking about us. No one wants to risk losing favor among the majority.”

Maspero has left a scar on a post-revolution Egypt that was supposed to be more equitable than three decades of life under the repressive rule of Hosni Mubarak. Though Mubarak is easily one of the most hated figures – both real and symbolic – of the region’s pro-democracy uprisings, many Copts lament a sad truth. That is, their protection as a religious minority group actually seemed more assured under the police state of the ousted president’s regime.

Many Copts were initially reluctant to take part in Egypt’s uprising, fearing increasing marginalization as political Islam was given space to mature. Under Mubarak, many Islamists were thrown into prison or relegated to underground status. Coptic activists suffered too under Mubarak and there were sporadic incidents of violence directed against them, but overall they were a protected, some might even say coddled, minority.

Just how safe Copts were under Mubarak will be debated by historians. But now, in the raw aftermath of sectarian violence there is widespread suspicion among Christians about the direction of the ‘unfinished revolution.’ The late pope was widely popular and his funeral marked one of the largest Egyptian public gatherings in decades. But many Copts like Mossad now wish the Coptic hierarchy had been more critical of the regime and of the military council which is ruling in the interim and which has so far failed to hold any one accountable for the deaths of Christians at Maspero.

Looking up at framed portraits of the pope, who Coptic Christians called “Baba,” father in Arabic, she said, “He was always in a hard place. … If Christians are critical, they can become the target. We saw this at Maspero and we’ll see it again.”

As presidential candidates have been busy campaigning the past six weeks, no rally has been complete without a communal requisite appeal to the people of Egypt – both “Christians and Muslims – one hand.”

Former Prime Minister Ahmed Shafiq, a candidate widely deemed “felool,” or  “a remnant” of the Mubarak regime, went even further promising to appoint a Christian woman as his deputy if he is elected. Yet despite the almost routine reassurance that “Christians and Muslims are equal in Egypt,” many Copts simply aren’t convinced.

“The first step is acknowledging the problem,” says Michael Hanna, an Egypt analyst at The Century Foundation,  which is “that the current Egyptian society and legal structure does not have them equal.”

Many are slow to acknowledge that inequality. Just last month, Dr. Abdul Mawgoud Dardery, a member of parliament from the Muslim Brotherhood’s political party, quickly dismissed the notion of systemic sectarian divides in Egypt.

“There’s not so much an issue between Copts and Muslims in Egypt,” Dardery says. “Small problems are exaggerated by the media and used by the old regime to divide Egypt and dismantle the revolution.”

It’s all part and parcel of the Islamophobia, he says, Mubarak perpetuated among the West and within his own country to assure no formidable competition to his regime’s own rule.

“There is an un-addressed question when it comes to the issue of Sharia [Islamic law] as to whether Copts can have a say in its interpretation, which would entail Christians making judgments and arguments about Islam and Islamic texts. For some, this is not permissible,” says Hanna.

“But if the constitutional and legal foundations of the state are sharia-based, excluding Copts from such discussions obviously implies an inequality of citizenship,” he adds.

“Why would a group like the Muslim Brotherhood go out of their way to appeal to Christians? They don’t want to alienate Salafis and right-wing voters who are presumably the majority of Egyptians, and that’s the most important constituency for the Muslim Brotherhood campaign right now,” says Hamid. “In Egypt, rights of Christians just aren’t a winning campaign issue.”

Youssef Sidhoum, editor of the Coptic newspaper al-Watani, knows that all too well. He sits at the head of a long oak table in his office in downtown Cairo — behind him hangs a photograph of his late father, who founded the paper. He says the situation for Egypt’s Copts has worsened following the country’s revolution. He bemoans a revival of political Islam and a failure of the ruling regime to enforce the rule of law or to offer Copts protection.

He pointed to to the embryonic efforts of some Christians to politically mobilize, such as Egyptian business tycoon Naguib Sawiris with his “Free Egyptians” Party. The party joined a coalition that performed poorly in last fall’s parliamentary elections and its impact dissolved into “quibbling.”

They were not “playing the game smartly,” he added. “It’s all about egos and Egypt needs time to mature.”

“As a Coptic Christian living Egypt, deep down in my heart there lies a wound – an open scab,” Sidhoum said. “It has festered over more than three decades as the situation only gets worse.”

One of the long standing grievances for Copts are the state-imposed restrictions on the right to build and maintain churches, regulations that Muslims don’t face when building mosques. National security police have the right to reject any application or suspend approvals for years without being held to account, says Sidhoum. A new church also requires a presidential decree, while repairs need a governor’s approval. What’s more, Sidhoum says Copts are woefully underrepresented in the military, judiciary, diplomatic corps, academia and almost all electoral bodies.

Despite these many lingering resentments, Coptic Christian voters seems to sense there is a moment at hand to consolidate their power and do everything possible to block an Islamist presidency.

“I always tell the people at my church: vote for any non-Islamists even if you think he is felool,” or “a remnant” of the old regime, says Priest Hegemon Methias Naser of Mar Mor’os church in East Cairo. “We are unofficially trying to bring them down.”

It’s a time, Sidhoum says, for Copts to think strategically and also to play it safe, a spirit he has brought to his role as a newspaper publisher.

“Until now, it’s not in our interest to criticize the military or the church. It’s an editorial weak point, yes, but these are our red lines. We don’t praise them either. We just don’t believe it serves our interests,” explains Sidhoum.

In Asyut, a governorate in Upper Egypt with one of the largest Christian populations in Egypt which saw sweeping Islamist gains in parliamentary elections last fall, priests refused to talk about the current political situation. But members of the congregation were clear.

“We’re afraid for our existence,” said Miriam, 33, who declined to give her last name. She has five children and she said her husband, like many, is unemployed and so like many Copts they are pondering emigration.

“We’ll probably leave. In the meantime, the priests are encouraging us to vote for anyone but Islamists,”  she says.

Hanna Georges Grace is one of the Coptic parliamentarians appointed by the ruling military. Out of 508 members of parliament, there are just 14 Copts total. Nine were elected and five were appointed by SCAF. Grace says the rights of Copts have been widely ignored by the Islamist-dominated parliament.

“Anyone who is a non-Islamist has been greeted like a guest inside the parliament,” Grace says.

Still, Mossad, the Coptic activist and organizer still recovering from injuries she suffered at Maspero, says Copts have to step out of the shadows of their churches and get involved in politics.

“If I lose money, I can pray all day to get it back. But it won’t come back,” she says. “We have to do something. We can’t just sit here on our couch and pray. We can’t just say ‘Christians and Muslims’ are one hand when we are broken.”

She freshened up her curls with a few hot rollers and set out to for yet another meeting, one she admits “probably won’t accomplish anything.” Her son, a young photographer who she desperately wants to leave Egypt and make a life for himself elsewhere, looks on.

“She’s still yelling,” says her son, handling a camera lens that was shattered during Maspero. “I’m just not sure how many people are listening.”