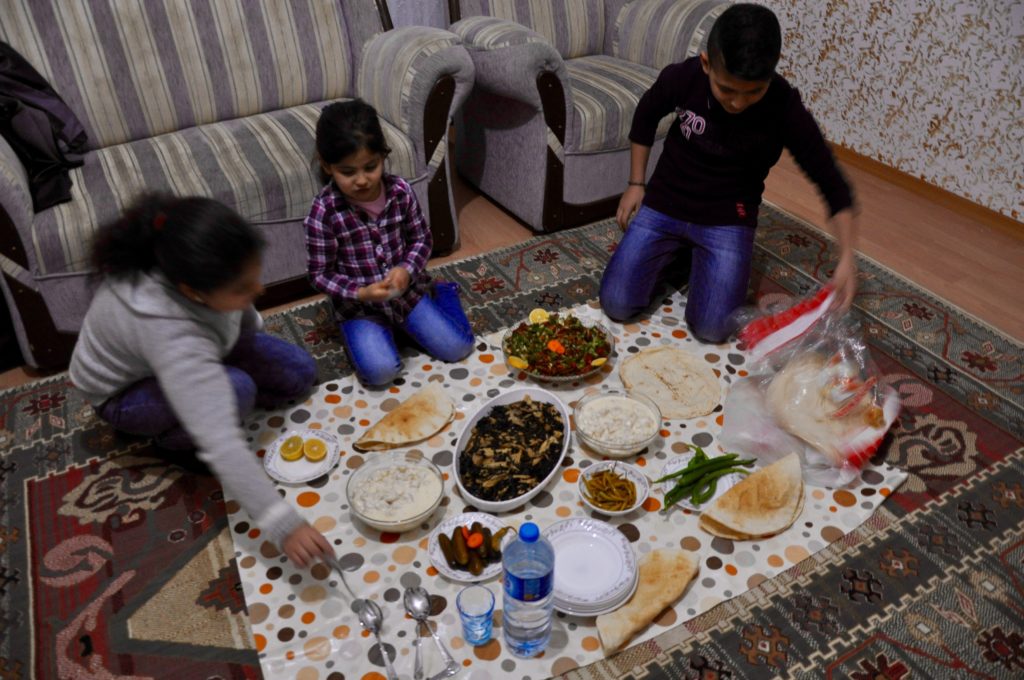 The Sheikho children gather for dinner in their small apartment in Istanbul. (Photo by Lauren Bohn/GroundTruth)

Rubi wanted two things for his 13th birthday: a bicycle, and to see his dad, Ahmed, again. It was the end of November, and it had been three months since his family was whole, since Ahmed left for Germany with Rashed and other colleagues from Salloura.

Rubi’s days in Istanbul were a steady grind, all blending together in a dim purgatory: wake up at 6 in the morning, get to work at the shirt factory two bus rides away by 7, iron, sew, take the boss’s orders, go home 12 hours later, eat, sleep, repeat. Before Ahmed left, he had been working at the Salloura factory, learning his father’s trade. But due to resulting tensions with As’ad, the patriarch of the 150-year-old sweets business, who up until recently had been his father’s long-time employer, Rubi had to find another job. It seemed like yet another break from his past, yet another root pulled up by Syria’s cruel war.

“I don’t feel like I’m a child,” Rubi told us one Saturday, exhausted after a long week at work.

When he wasn’t working 12-hour shifts, he’d sit on the floor at home watching TV, his back leaning against a brown couch in their family room that doubled as the bedroom. He slept on a thin foam mattress next to his sisters and his mom in their two-room basement apartment in Esenyurt, a working-class district on Istanbul’s outskirts. Sometimes he’d watch American action movies with Turkish subtitles he couldn’t read, only understanding the universal language of heated fight sequences. “Let’s go baby” was a phrase he had picked up, accompanied by a right hook.

It had been four years since Rubi last saw the inside of the classroom, a thought that tortured his mom, Leila. Ahmed’s absence had been hard on them all, but she had to remind herself daily that she had pushed him to go.

“I ask myself, ‘Why did I let him go?’ The kids are without their father, we’re struggling so much financially. But then I remember it’s for their futures, it’s for them to go to school, to learn.”

Five years ago, the Sheikhos were living a completely different life. Ahmed was the head manager at Salloura’s two most popular stores in Aleppo, making a great salary by Syrian standards. He had just bought a brand new home for his family.

“I was a stay-at-home mom, picking fabric for our new curtains, making sure Rubi studied,” Leila sniffled through her tears.

Rubi was going to one of the best public schools in Aleppo, and after school, he was taking English lessons with a private tutor. “I remember how life was in Syria,” Rubi said through a wave of sadness. “I remember our house, going to school…our car, our life. I remember studying, and my mom would yell at me, ‘Come on, Rubi, study!’”

His sister, Ruseel, was in kindergarten then. Little Rivana was just born, “the daughter of the revolution,” they’d later call her. Everything was as it should be – everything they hoped it to be.

“Now look at our lives. What is this?” Leila gestured to the room around her with disbelief. The damp basement apartment on the edge of Istanbul cost them two-thirds of Rubi’s monthly salary of $250. Narrow windows near the ceiling let in a sliver of sunlight for just a few hours a day. The winter cold was setting in as November transitioned into December, and the price of gas was too high to keep the heat on.

If Leila and the kids hadn’t attempted the journey to Europe on their own in September, losing everything they had in the process, life wouldn’t be as difficult. But just a couple weeks after Ahmed set off to Germany, Leila’s brother convinced her to join him on the less popular land route to Greece through Bulgaria, crossing through Turkey’s dark, wooded border in the middle of the night.

“It was like a scary movie on TV,” Rubi recounted, boyish excitement still swirling on his tongue. “The trees were as big as the room.”

In the heaviest darkness of night, Leila carried Rivana on her back, clutching Rubi and Ruseel with each hand as they walked through the forest.

An hour or so into their trek, they were caught by border guards. “We were detained. They kept us in a jail for four or five hours,” Leila recalled. “I was so shocked by the police. They were big scary men in suits, like those secret gangs in action films.”

The men – Leila wasn’t sure if they were Greek or Bulgarian or Turkish authorities – took everything Leila and the kids had on hand: money, passports, phones. They were sent back to Istanbul, where there was nothing left for them. Once again, the price of freedom was higher than they could afford.

With the help of Leila’s sisters, who also lived in Istanbul, they found a new place and replaced their furniture; people donated basic appliances, like a fridge and a washing machine. Still, months later, the failed journey hung over them. They had been so close only to now be even farther. Ahmed’s absence became an increasingly dark presence hovering over them all.

“The most difficult time is at about 1 a.m.,” Leila said, crumbling into tears. “That’s when I’m used to Ahmed coming home. I imagine his voice coming through the front door, whispering, ‘Quick, quick, put the coffee on the stove.’ I look at the door now and expect him to come through. I think, ‘How could I let him leave?’”

On Rubi’s 13th birthday, on the last day of November, Ahmed sent him a celebratory voice note over WhatsApp. “Happy birthday, Abu Ahmed,” his father’s voice bellowed from the speaker. The name means “father of Ahmed,” an honorific title the father gave his son the day he left for Germany.

“Rubi is the man of the house now,” Ahmed explained during our visit to him in Germany. “I told him, “…You’re taking care of our family. You’re in charge.””

Rubi told his father not to worry, that he had everything under control. But the then-12-year-old had two small demands in exchange for carrying the torch.

“He asked me, ‘Can you please just get me a new pair of sneakers or a bike when all this is over?’” Ahmed recalled with a sad laugh, reminded that his child was exactly that: a child.

With the excitement of a boy entering his teenage years, Rubi looked forward to celebrating the milestone, albeit in exile. “You have to come and celebrate with me,” he insisted to us two weeks before his birthday.

Leila was heartbroken that she couldn’t afford a cake for her son. Back in Syria, they would mark every birthday with one. When an Istanbul pastry chef heard from us about Rubi’s story, she was so moved that she donated a cake. Leila, overwhelmed by the kindness of a stranger, cried as she carried the cake to her son. Covered in a layer of green icing, the cake was a confectionary monument, a prayer to the future they hoped to have: a German flag, made out of red, white, and black icing, covered its face, along with edible photographs of days gone by. The candle flames danced as Leila walked towards her son. Rivana and Ruseel danced around Rubi as we all sang Happy Birthday.

Abu Ahmed closed his eyes, made a wish and blew out all the candles. For that moment, he was only and fully Rubi. 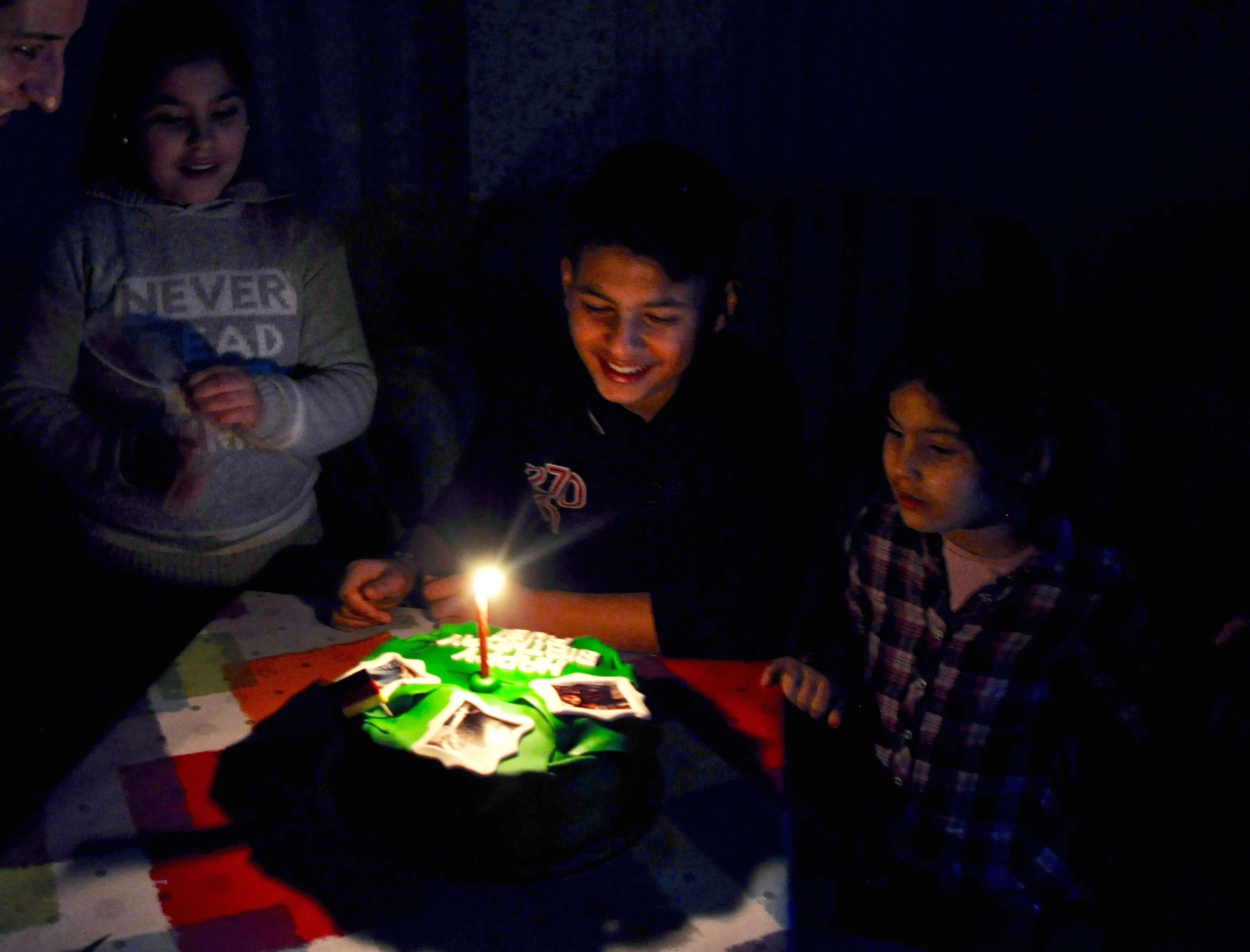 Two weeks later, we got a call from Leila.

“I have some news!” she excitedly announced. “We’re going to Germany!”

There were rumors swirling that the migrant trail to Europe would be sealed shut come 2016. The clock was ticking.

“If we don’t go now, it could be years before we go to Germany the legal way,” Leila said. She discussed their ever-slim menu of options with Ahmed and they agreed: even one more year out of school and separated would be too detrimental for Rubi and his sisters.

Ahmed, swallowing his pride, asked his new benefactor – the investor who paid his way to Europe – for help. The money would be taken out of Ahmed’s salary once the new pastry shop in Germany was up and running.

Once they received the money, things moved swiftly. Leila hurried to get some last-minute supplies for the journey: thick socks, warm boots, waterproof jackets and extra diapers for Rivana. They could spend hours on the boat between Turkey and Greece, and the five-year-old’s bladder might not hold up against the fear of the rocky seas.

Within days, they were ready to go. First, they’d take a six-hour bus journey to Izmir, a Turkish coastal city. There, they’d wait for the smuggler’s signal to board one of the small, overfilled boats across the Aegean Sea to Greece.

“I’ll refuse to get on a rubber dinghy…I’ll only ride a real boat,” Leila said, fear seeping into her voice as she waited for the midnight bus from Istanbul to Izmir. We reminded her to get proper lifejackets for herself and the children; faulty ones had flooded the market.

Leila sat anxiously, tapping her boots. Buried deep in her bag was the Quran she had brought with her from Aleppo, her only possession from a previous life.

“This will protect us, just like it has so far,” she said. The kids buzzed with excitement, more eager than anxious. They took selfies while they waited for the bus to arrive.

Midnight struck. We walked them to their bus. Leila had tears in her eyes, unable to say goodbye. The girls danced to the beat of nearby drums. Turkish mothers were kissing their sons as they left for military service, goodbyes falling from the sky like rain.

As Rubi approached the bus, he stopped and looked back. His face was awash with precocious adult resolve – the result of months of living out his new name, Abu Ahmed. But innocent, childlike wonder sparked through his deep brown eyes. Once again, he was only and fully Rubi. And he was ready for his new life to begin. 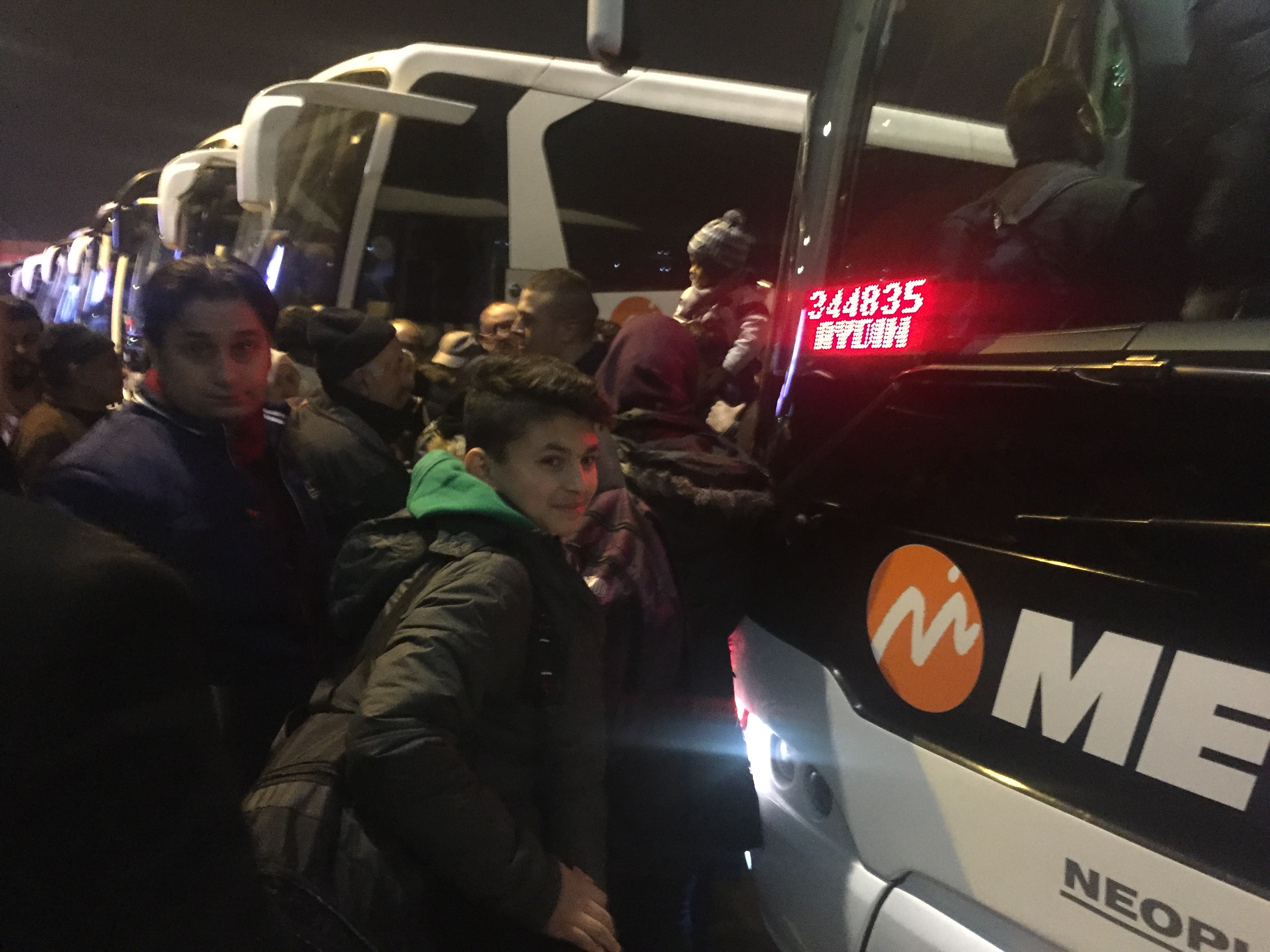 A month later, he sent us an ecstatic WhatsApp dispatch from Germany with a wave of new photos. He was gripping the handles of his new bike, riding around their camp. Nearby were Rubi and Ruseel, perched on their father’s leg, smiling and waving.

After a roller coaster of hope lost and found and lost again, they were finally reunited. Their journey is just beginning, the road ahead long and less familiar than ever before. But at least they’re back on it together. 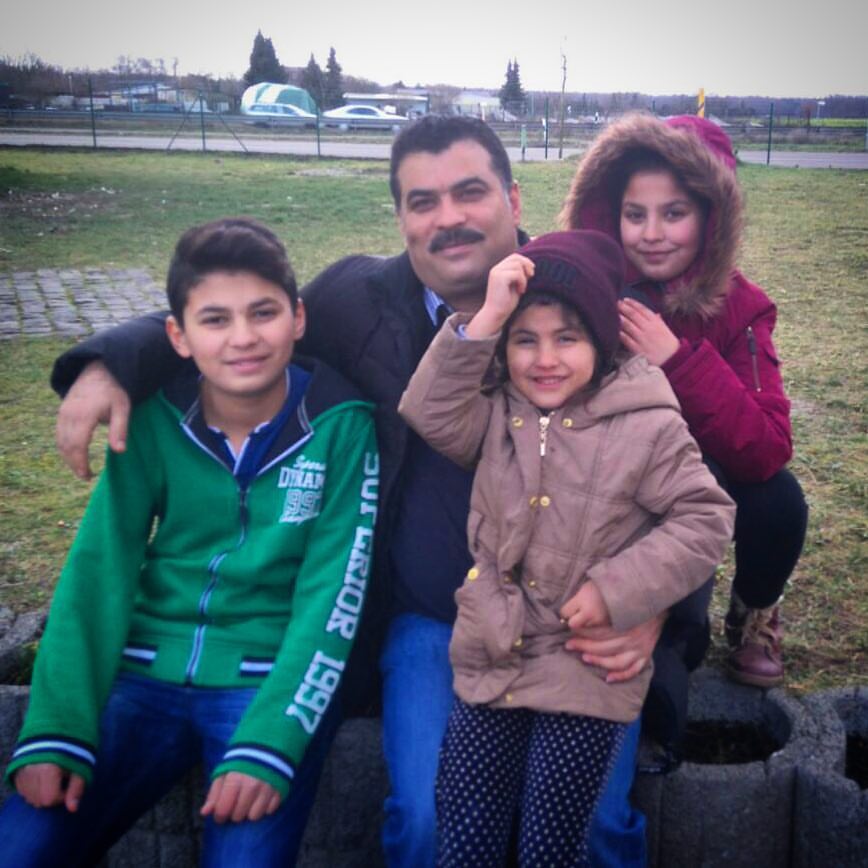 While this is the last installment in our five-part series chronicling the evolving story of Salloura – the family, its enduring craft of sweets-making and the workers who carry on the family’s trade – we’ll continue to follow the journey of the 150-year-old bakery and its resilient workers. Stay tuned.