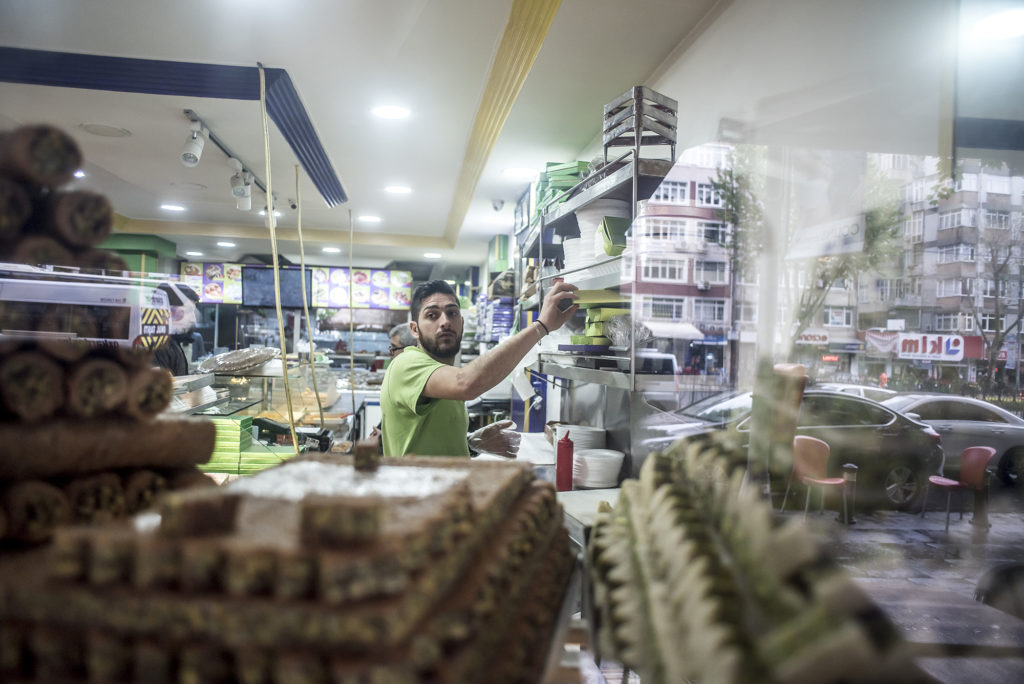 Some of Salloura's signature sweets are visible through the shop window. (Photo by Joris van Gennip/GroundTruth)

It was a hot, humid June in Istanbul. A deadline hovered over Ahmed. He gave himself three months to make the biggest decision of his life: Would he stay? Or would he go?

The reasons to leave Istanbul far outnumbered the ones to stay. He was working day and night for a salary that barely made ends meet. The long hours weren’t new – his life in Aleppo was work, 15 hours a day, seven days a week. But unlike in Turkey, Ahmed made more than enough in Syria: he bought a brand new house for his family just before the war; his wife, Laila, was a respected housewife, pushing her kids to study; his two older kids, Rubi and Ruseel – little Rivana wasn’t even born yet – went to good schools. Rubi even had a private English tutor.

But the war in Syria changed everything. Ahmed’s life in Turkey became almost too embarrassing for the proud 38-year-old Syrian pastry master, once part of a vast sweets empire, to say out loud.

“My son [Rubi] who’s now 12, is working in the Salloura factory,” Ahmed explained, hands squeezed together on the table in front of him at the restaurant in Istanbul. “My daughter [Ruseel] who’s nine, has a tutor that’s teaching her a couple of hours a day, and my youngest daughter [Rivana] is too young for school.” They call her the daughter of the crisis. She was born in March 2011 – the month Syrians began pouring into the streets to protest the government.

The last time Rubi saw the inside of the classroom was four years ago, before opposing forces carved Aleppo street-by-street. Before the country’s cultural – and culinary – capital descended into chaos.

“Since he’s not going to school, I want him to at least learn a trade,” Ahmed said, the muggy Istanbul air planting beads of sweat onto his thick, dark mustache. He sent his son to his boss, As’ad Salloura, so he could learn. He’s proud of his boy, but Ahmed’s heart breaks every time Rubi walks out the door.

We visited Rubi during the middle of his shift on a smoldering afternoon. Full-cheeked and long-lashed like his dad, the 12-year-old was dressed in a baggy white uniform, clad with an apron and a hair net. He wore a smile from ear to ear with specks of milk splattered on his face. He had been stirring a hot cauldron of it to make Salloura’s famous sweet ishta – fresh cream. It looked like he was playing dress-up with his dad’s work clothes, trying to access a world he didn’t fully understand. 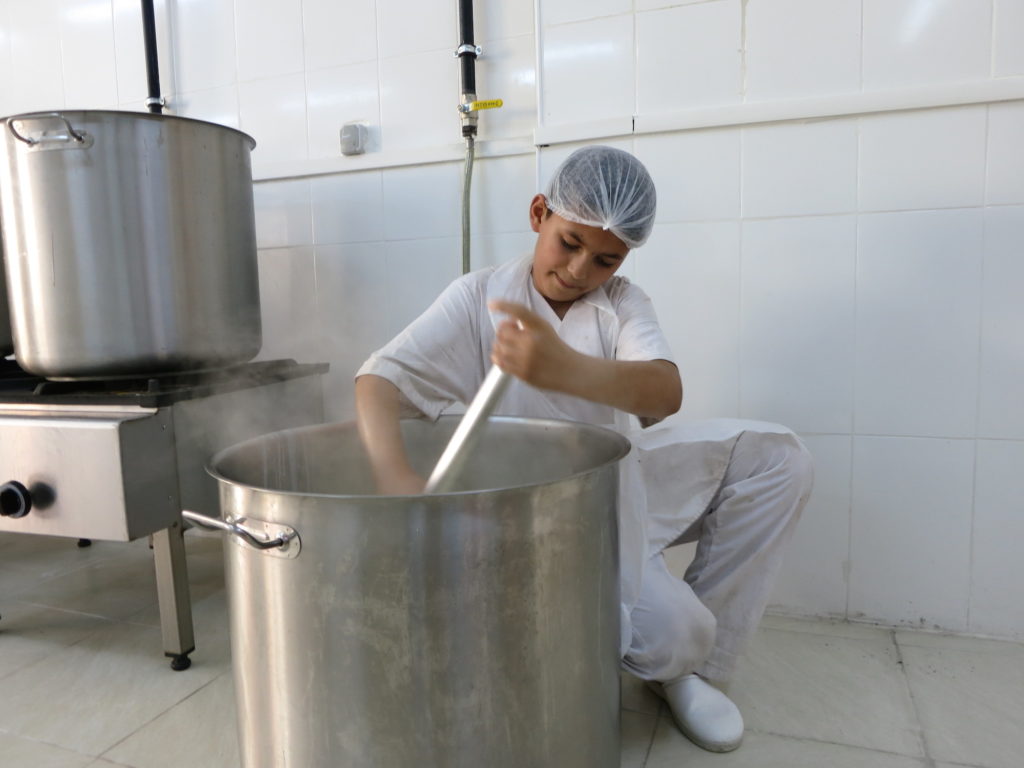 “My dad wanted me to work here so I can learn the trade,” he yelled over the hum of the factory’s machines. His voice was high, almost cracking, hinting at adolescence. “I like this business. It’s fun. It’s good.”

There’s no life for Rubi here, his father said. “Studying is the most important thing. That is why my wife tells me we should go to Europe, if just for the children.” There won’t be a Syria for the next 50 years, he said. At least not the Syria they recognize and love.

But there were reasons to stay. Ahmed’s list was shorter, sprinkled with warm sentiments but rooted deeply by unwavering loyalty. Those roots are all he knows.

Turkey is different from Syria, but the two countries share a religion and, in some ways, a culture. In his adopted city, Ahmed is fluent in a shared social currency – the undertone of conservatism in which he’s comfortable letting his young kids, especially his daughters, come of age.

Then came Salloura itself, the protagonist in his life’s story.

There was the invaluable sense of the familiar every time he walked in the door, fulfilling his daily duties just like he did back home: bringing the day’s stock from the factory to the store; spreading thick layers of sweet cream and cheese for desserts; taste-testing the orange-blossom syrup drizzled on practically everything. He’d see familiar faces in customers and colleagues – some of those colleagues were handpicked by Ahmed’s boss to join him in Turkey.

…Which led him to list his biggest deterrent in leaving, the man behind the name that has helped him rise time and time again: As’ad Salloura.

“I started working at Salloura when I was 14 years old,” Ahmed said, “I’ve been with [As’ad] for 24 years.” As’ad helped pay for his car, his wedding, his first house. It’s because of As’ad that Ahmed learned everything there was to know about making Salloura’s world-famous sweets, about the craft he has come to love.

The dependency was mutual. “When I saw the first warplanes over Aleppo, As’ad gave me the keys,” Ahmed recalled. “He asked me to open the shop. From then on, I was the one who was responsible for the stores.” That was in the summer of 2012.

The years that followed are remembered more like a nightmare than reality. “I never thought we would reach this point,” Ahmed remembered. Soon, gas was cut off in the neighborhoods he worked in. Electricity, too. Sugar, flour and other materials became very expensive. They had to hike up prices. Ahmed’s new home, barely two years old, became a target for aerial strikes. “After the Free Syrian Army moved in, the warplanes started dropping bombs,” he recalled. 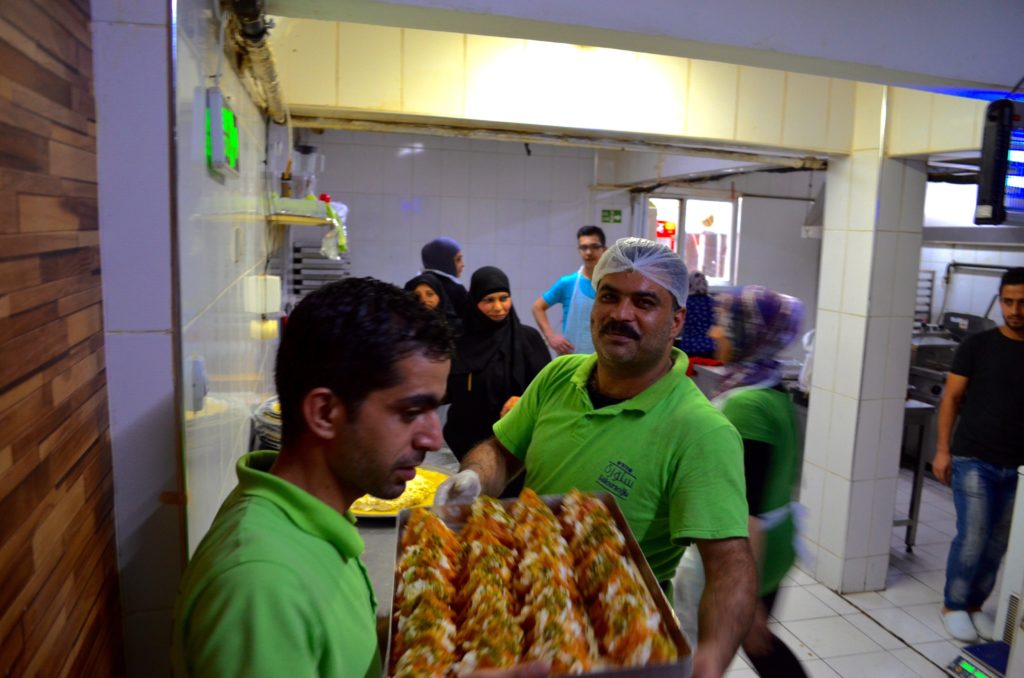 His house – the one he bought just two years before – was ransacked, IDs stolen along with almost everything else. He had to move his family quickly. They went to their ancestral village northeast of Aleppo. The journey to work became too dangerous, but the war wouldn’t keep Ahmed from his trade. Instead, it came to him: a colleague would bring to the village boxes of whatever the shops were producing – mostly baked nutty sweets that didn’t need refrigerating – for Ahmed to taste-test.

“Afterwards, I’d call the workers to instruct how to fix the sweets,” he said, almost beaming. “To make them this way and that.”

Ahmed’s devotion was unmatched. As’ad knew that. So when Ahmed called him after two years of living on the brink, unsure how much longer he and his family could make it in Syria, As’ad paid to smuggle Ahmed, his wife and three kids out of Syria and into Turkey, covering the 750-mile trip to Istanbul.

And again the heavy pendulum of dependency swung back. Ahmed and his family arrived in Istanbul at 9 a.m. He went in that day at 3 p.m. and worked into the morning, immediately, as if he’d been there the whole time.

He spent the next year and half building the Salloura that exists today, in Istanbul’s Little Syria. “I am running this shop and the factory,” Ahmed boasted. “As’ad trusts me like family.”

But now he was facing existential questions: Could he break that trust? Could he abandon the man that gave him free license to explore a craft he loved; a trade in which he possessed great talent? How would he leave As’ad, who was practically his older brother, who helped his wife and kids escape violence and hunger in Aleppo?

On that sticky June afternoon, and most afternoons, those questions weighed on Ahmed.

“I have a deadline,” he said. “After two or three months, I will leave from here,” he announced to an empty dining room before his shift began. His manager, As’ad’s cousin, berated him for speaking to us for so long. Ahmed was on the clock, always.

All summer, Ahmed would glance up to one of the screens mounted throughout the store to watch the news. Reports flashed with tales of modern-day odyssey: small black rubber dinghies overflowing with people, some landing on the rocky shores of Greek islands, others not so lucky; droves of people shuffling across dry fields that mark the borders separating Eastern European countries. The smuggler’s path to western Europe became well-trodden territory – by land or by sea, the distance from Turkey to Europe was only a matter of a dozen miles.

He told Rashed, his best friend and colleague, about his plan. He convinced him and a few others to join him, so they could open a store in Germany. But they had to keep their plan a secret, for fear As’ad and others would successfully dissuade them. “Nobody will know when I leave,” said Ahmed. “I will just send a message to As’ad…‘I’m leaving.’” There would be no explanation. No hugs, no farewells.

And that’s exactly what happened.

One day in mid-August, Ahmed was gone. So was Rashed, and two other colleagues from Salloura. “They just left,” said As’ad’s cousin, Akram, who manages the Istanbul store.

It would be months before we saw them again.

This piece is part of a series produced in bi-weekly installments in collaboration with Culinary Backstreets.