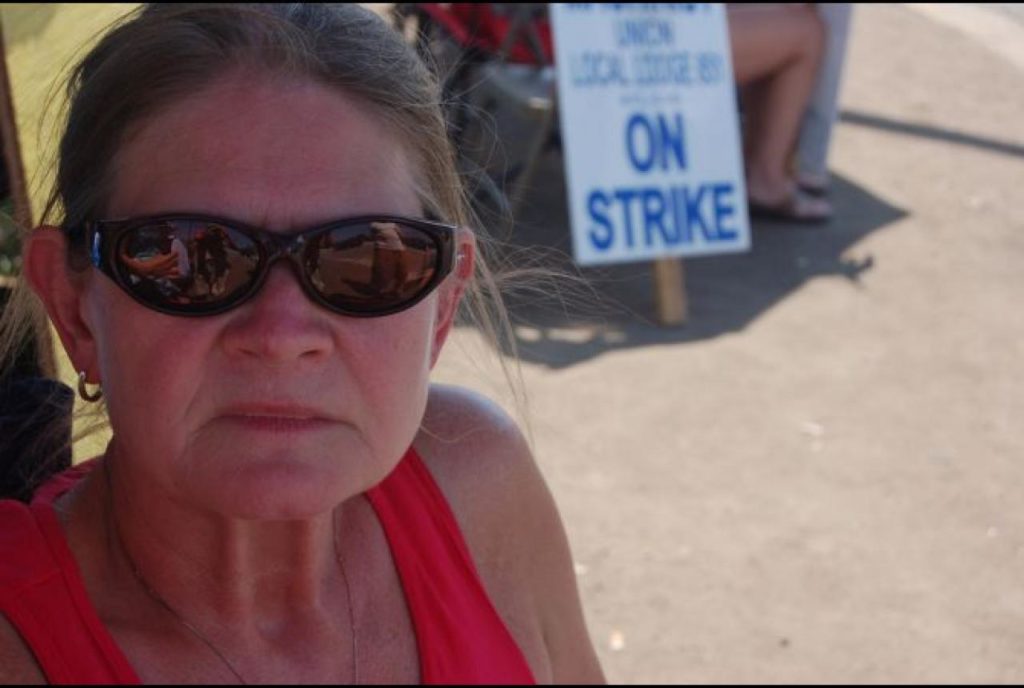 One of 780 striking workers outside the Caterpillar plan in Joliet, Illinois on August 1. The strike began on May 1 and ended August 17 after workers voted to accept a deal. - ((John Bachtell / Courtesy))

JOLIET, Ill. — Setting up the weekly food pantry for the International Association of Machinists Local 851, Darlene Chandler was downright miserable.

But so was everyone else.

“The young people, they’ll never get the wages I have,” grumbled Chandler, an 18-year veteran at the Caterpillar Inc. factory here about 120 miles northeast of the company’s global headquarters in Peoria, as she lined up rows of donated food for fellow workers.

“It’s corporate greed,” fumed Laurie Cox, another 18-year veteran. “They’re making billions and they can’t share it with their workers.”

The fury has hardly waned for many of the 780 workers whose 15-week strike ended recently in severe concessions and cutbacks at the hands of the world’s largest maker of heavy equipment.

Workers accepted a six-year deal that includes a freeze in wages and pensions, as well as a shift to a 401K plan for most. Union officials said workers‘ health care contributions would double, though they did get a $3,100 bonus for signing the contract.

What really got the workers’ gall was the fact that Caterpillar has been surging financially and rewarding its executives very handsomely. In July the company trumpeted its quarterly results, saying it had set an “all-time” record in profits per share, sales and revenue.

Caterpillar similarly set a record in sales and revenues last year and its profits after taxes hit $4.9 billion, a 55 percent increase from 2010 — and such financial fortune has paid off for Douglas R. Oberhelman, Caterpillar’s chairman and CEO, who earned $16.9 million in 2011, up from $10.5 million the year earlier, company records show.

Traditionally, US companies have fought for wage and benefits concessions from their workers only when facing hard times. But Caterpillar has broken that pattern since the 1990s, saying that as global competitor it needs to bring higher-paid factory workers in North America down from their pedestals.

Labor experts and economists say this strategy bodes poorly for already weakened blue-collar unions, speeding the demise of well-paying factory jobs and diminishing the idea that the US can succeed globally if it keeps up high-skill, high-quality factories like those run by Caterpillar.

Caterpillar’s products are sold in 182 countries and its sales outside the US made up 70 percent of the company’s sales last year. Among its 125,099 employees at the end of 2011, 56 percent were located outside the US, company reports show.

Not only have US factories trimmed jobs in recent years, but they have been worse than stingy with their paychecks. The average factory worker earned $8.59 an hour in 1982, according to the US Bureau of Labor Statistics. Using 1982 dollars, that figure fell to $8.52 this July, the figures show.

“When more and more employers take Caterpillar’s view of ‘We’ll pay what the market can bear,’ that really erodes the idea of working for a mutual gain,” said Michael LeRoy, a labor expert as well as a law professor at the University of Illinois.

The logic of engaging in world trade is to make the country richer, said Robert Scott, an economist at the Economic Policy Institute in Washington, DC. But the global strategy carried out by Caterpillar and others “puts tremendous downward pressure on workers’ wages.”

When Caterpillar took on the United Auto Workers (UAW) union in the 1990s, officials from the Peoria-based firm warned the union that global competition had led them to change the way they pay their workers. And that’s what they did.

After a bitter six-and-half-year battle with company, the UAW finally surrendered to a contract that ended decades of pattern bargaining that had tied Caterpillar into the same contracts as the Big Three automakers. It also introduced two-tier wages, creating a lower level of wages-a step fought by the union, and other steep concessions.

Similarly, 470 workers at a Caterpillar plant that built diesel locomotives in London, Ontario, succumbed to the firm’s globalization mantra and cost-cutting resolve in February. A month after locking out its workers amid contract talks, the company shut the plant, saying their work would go to plants in North and South America. The union said Caterpillar wanted to cut wages in half, and markedly trim benefits and pensions.

Replying to criticism about the company’s bargaining, Caterpillar spokesman Rusty Dunn explained in an email that, “We don’t think there is any such thing as a ‘hard line.’ Any place in the world where Caterpillar does business and has facilities must be competitive.”

Caterpillar’s goal is to make its wages “market-based,” and in the case of Joliet, the $25.88 an hour earned by union workers in the higher pay bracket is above those paid locally, Dunn said.

Going into negotiations with company in early March, Tim O’Brien, president of Local 851 for the last 12 years, had warned the workers to prepare themselves for a fight. That was an understatement.

“Everything they took away was the worst they could,” said O’Brien, who urged the workers to reject the company’s offer.

But with no end in sight to the dispute, after Caterpillar hired striker replacements and over 100 union members returned to work, officials from the union’s district council stepped in and produced an offer. The union has not released the count from the vote that ratified the contract, saying only that it was close.

“We needed to take control and make sure we still had something to negotiate,” said Steve Rogers, the district council official who worked out the deal. A deal, he added, which he considers “extremely unfair and unethical in every way.”

“It’s not just our contract, it’s the contract with the community that they are breaking,” Rogers said.

During the dispute, Vicky Pogliano, 50, put in her required time on the picket line and then some, receiving $150 strike pay per week from the union. A veteran of 17-and-a-half years at the factory, she was scared of losing her job, but felt it was her responsibility to “stick up for we believe.”

She was standing outside the small local union hall the day that the contract agreement was announced. “I was bawling my eyes out,” she recalled. “Oh my God, I just couldn’t believe that it passed.”

The union decided to keep the food pantry open for a while to help workers hurt by the strike. One of those who stopped by last week to pick up two small bags of food was a 44-year-old worker who didn’t want to give his name, explaining that he feared retaliation from the company.

He said in six years, when it’s time to renegotiate the employment contract with Caterpillar, there won’t be any pay increases either.

“I told the others, ‘You voted for today. They starved you out. Six years from now what is going to change?’