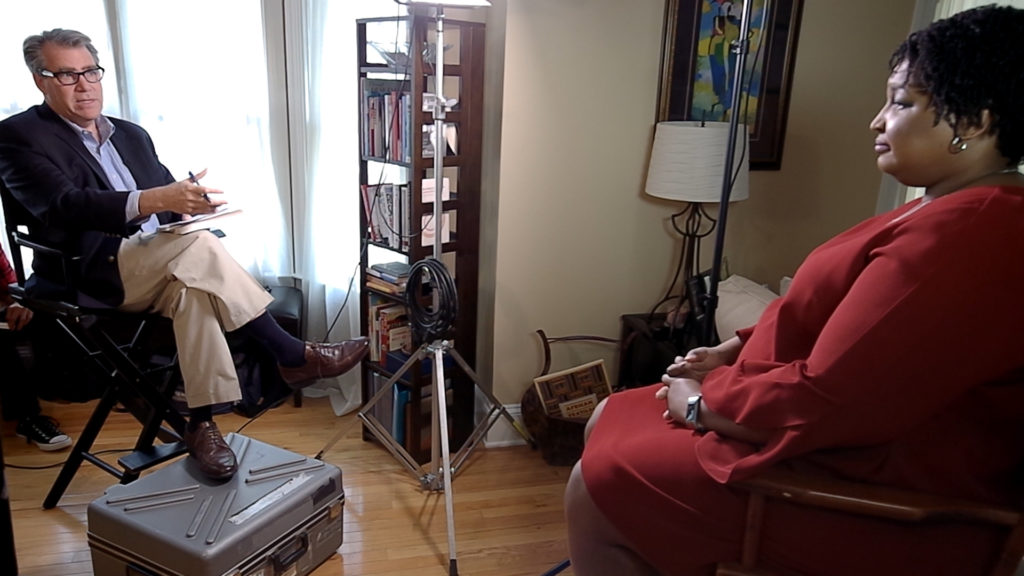 Former gubernatorial candidate Stacey Abrams spoke with GroundTruth founder Charles Sennott about the consequences of voting suppression for democracy at a local and global level.

ATLANTA — Stacey Abrams’ home was filled with bookshelves lined with hardcover classics like Robert Caro’s five-volume biography on Lyndon Johnson and John F. Kennedy’s “Profiles in Courage” and Doris Kearns Goodwin’s book on Abraham Lincoln, “A Team of Rivals.” Tucked away on a lower shelf, there was a collection of eight romance novels she’s written under the pseudonym Selena Montgomery.

On a coffee table there was a bible with yellow post-it notes marking certain passages. On the fireplace mantel were framed family snapshots of college and law school graduations and a photograph with President Obama.

And on one wall was a large world map with pushpins that mark her travels to many corners of Africa, Latin America, Asia and and cities and towns throughout the United States as well.

In a wide ranging interview with GroundTruth on Tuesday, Abrams, 45, a Georgia gubernatorial candidate who narrowly lost a November election in a race charged with allegations of voter suppression, shared some of her journey in life.

But mostly, she wanted to focus on the legal battle she is undertaking against not just voter suppression, and how it played out in the Georgia gubernatorial race, but against an electoral system writ large that she feels is not living up to the promise of democracy in America. The picture she paints seems to be from another era in the Deep South: Minority voting districts forced to wait on long lines, voting machines that malfunctioned and an exact-match law on registration signatures that left some 55,000 citizens voting rights “suspended.”

Our GroundTruth reporting fellow Cardine Johnson and I worked together, asking Abrams how  these efforts to suppress voters impacted the November election. Abrams, who in February delivered the Democratic response to President Trump’s State of the Union, the first African-American woman ever to do so, has put voting rights on the map in what has become a crowded field of Democratic presidential candidates.

Former Vice President Joe Biden, who announced his candidacy for President this week has met with Abrams amid speculation he may invite her to join him as a Vice President. But so far, Abrams, the former Minority Leader of the Georgia House of Representatives from 20111 to 2017, has refused to say what her plans are for the future. Most political pundits suggest the possibilities are wide open, and there seems to be consensus that she will focus her efforts on a run for the U.S. Senate to unseat a vulnerable, incumbent Republican. She did not shed any light on how or when she will make her decision. But clear evidence that Abrams has put the issue of voting rights in the center stage of American politics was on display this week as CNN hosted a series of town meetings with leading candidates.

In one of the nationally televised gatherings, Sen. Bernie Sanders (I-VT) was asked if he believes that incarcerated felons — the Boston Marathon bomber, for instance, or sex offenders — should be allowed to vote while they are serving their sentences.

“I think the right to vote is inherent to our democracy — yes, even for terrible people — because once you start chipping away … you’re running down a slippery slope,” Sanders said.

“I do believe that even if they are in jail paying their price to society, that should not take away their inherent American right to participate in our democracy,” Sanders added.

Fox News and the Republican Party wasted no time jumping on the statement as proof that Democrats were skewing to the far left, and Sanders’ unapologetic view on the sanctity of voting rights may be seen as noble by some but he has paid for it through a significant drop in the polls.

We asked Abrams about the issue of the voting rights for convicted felons and about Sanders’ statement. She said she did not see the CNN town meeting with Sanders, but she offered a thoughtful and measured response, saying, “I believe fundamentally in the right to citizenship and that citizenship is expressed through the right to vote.”

She added, “I think we are too facile sometimes in how we use terms and therefore my response is more complicated in part because I know that our laws determine violent felonies very differently from state to state and from community to community and that violence doesn’t have to be a part of the crime … And therefore using that as a predicate is difficult for me.”

She was asked more pointedly whether she agreed with Sanders and whether convicted felons did not temporarily surrender some rights, such as voting, until they paid for the debt to society for their crime.

Most Democracies around the world already allow prisoners to vote, but only two states in America, including Vermont and Maine, allow it. There are 14 states that just remove a person’s right to vote while incarcerated. There are 12 states, where citizens of the U.S. lose their right to vote indefinitely after committing certain crimes. That means even after they complete their sentence they are still not allowed to vote. Additionally, there are 22 states where felons lose their voting rights while incarcerated, as well as for a period of time after they serve their time in prison.  The United Nations Human Rights Committee has previously condemned the U.S. for permitting states to ban those with past felony convictions from voting.

We also asked Abrams about the wider attacks on democracy and voting rights that are occuring in other corners of America, such as Florida and North Dakota, and many corners of the world where populist authorianism is on the rise. She said these efforts were connected as part of “a broad assault on democracy today.”

We asked about Russian interference with the 2016 presidential election which is clearly spelled out in detail in the report by Special Prosecutor Robert Mueller, a redacted version of which was released last week, and if that too was part of this assault.

“Democracy is vulnerable,” Abrams explained, “and we are facing a sustained assault because fundamentally it is a question of power. And what we are seeing is that those who want their power maximized are willing to do whatever it takes to avoid sharing that power, and the most direct way to accomplish that is voter suppression… So whether it is local or national or international, it is all of a piece.”