ON THE GROUND IN WICHITA, KS

Can the pandemic lead to worker solidarity in Kansas? Lessons from 100 years ago. 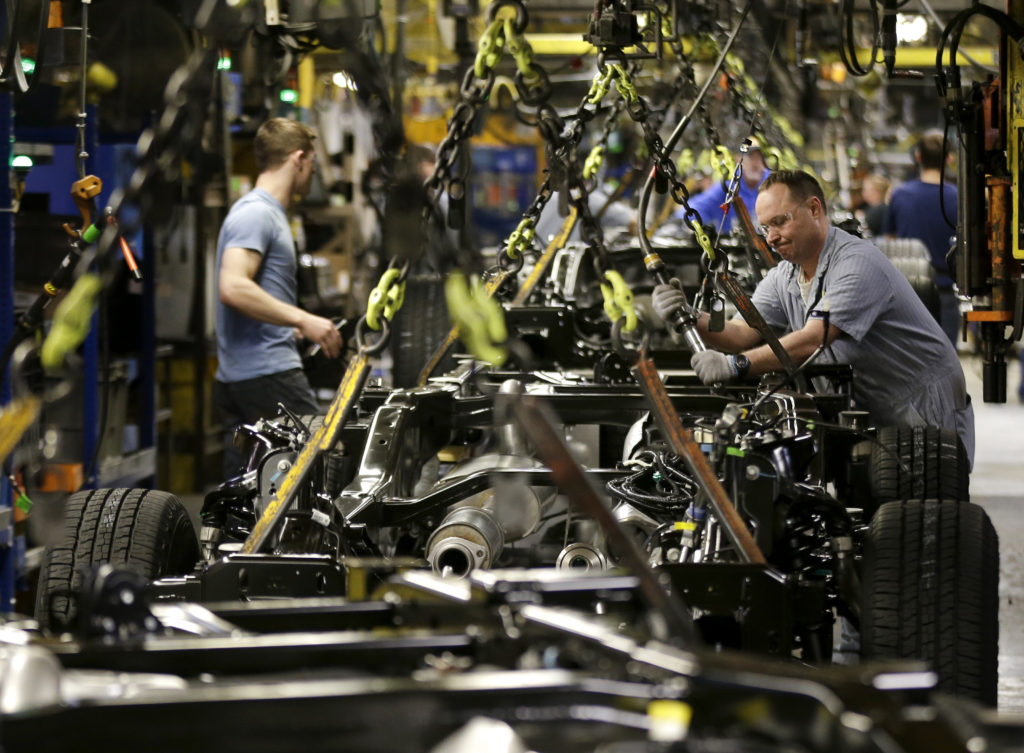 In this March 13, 2015, file photo, a worker prepares a chassis to receive an engine on a new aluminum-alloy body Ford F-150 truck at the company's Kansas City Assembly Plant in Claycomo, Mo. Ford Motor Co. is temporarily idling four North American plants in response to slowing consumer demand for new vehicles. The company has scheduled one-week closures in October 2016 for its plants in Kansas City, Mo., and Hermosillo and Cuatitlan, Mexico, and a two-week closure in Louisville, Ky. (Photo by Charlie Riedel/AP Photo)

WICHITA, Kansas — On Aug. 25, 1922, in a headline for an article in the weekly labor newspaper, the Plaindealer, George T. Ashley posed a question to Wichita union members: “Will organized labor survive or perish?”

Just a few years after the end of World War I and the start of the 1918 Spanish flu epidemic, of which the first cases in the United States were recorded in Kansas, Ashley wrote that organized labor was then experiencing its most critical period.

“During the late war organized labor, for the first time in its history, came into its own,” he wrote. “But the victory gained was apparently only temporary, born of the stress of the times, rather than to any solidarity in its organization, or wisdom in its management.”

Nearly a century after his writing, leaders of Wichita’s contemporary labor movement are facing a similar question — how will the coronavirus pandemic and subsequent recession impact solidarity among workers?

Although the twin crises of the war and the Spanish flu epidemic helped labor gain momentum, it wouldn’t continue unless workers realized their own collective power, Ashley wrote.

Ashley’s paper, The Plaindealer, began printing in 1919 and it isn’t published anymore, but the digital archives maintained by the Kansas State Historical Society offer a window into how union members connected across Wichita. Former leaders say union decline caused labor’s power to wither, and along with it, member solidarity in a “right-to-work” state like Kansas.

In the last decade, labor unions have seen a decline in members across the country. But in Kansas, union membership has risen. From 2009 to 2019, membership in the U.S. dipped 2 percentage points overall. In Kansas, it rose 2.5 percentage points in the same time period, according to data from the Bureau of Labor Statistics.

The Plaindealer educated union workers about their power as a group and the impact of solidarity on their working conditions, said Harold Schlechtweg, who edited the paper from summer 1995 to spring 1997.

“Just because you pay dues doesn’t mean you have the faintest idea about what a union is,” Schlechtweg said.

Now retired from both editing and his job as a union representative for SEIU Local 513, Schlechtweg recalled how he wrote nearly every story in the paper and attended every local union meeting he could. The paper was only published monthly then, but it was a full-time gig.

Schlechtweg crafted the stories in the basement of the Wichita Machinists Hall, which still serves as the headquarters of the Machinists Union. It is the biggest union in Wichita and represents aerospace workers at the city’s two largest companies, Spirit AeroSystems and Textron Aviation, among others.

Pat Lehman, who hired Schlechtweg as editor, worked upstairs as the secretary and treasurer for the Machinists Union. Lehman and other union leaders got together to purchase the Plaindealer when the longtime family owners were ready to shut it down. Having picked up her first issue in the late 60s, when she was an aircraft employee at Beechcraft (now part of Textron Aviation), Lehman was intent on ensuring it didn’t disappear from Wichita.

“I think it helped hold us together,” Lehman said of the Plaindealer. “It was that sense of being a part of the labor community for the average person. When it was going into everyone’s home, people that weren’t necessarily union activists still could read about what was going on.”

The newspaper showed up in her mailbox because she joined the union her first day at work. Lehman had been familiar with the Machinists Union since she was 9 years old. Her dad worked at a small manufacturing company that was organized with the Machinists, and she would attend the union’s Fourth of July picnics, seeking out the free ice cream.

Lehman saw the union’s impact on her family more substantially when her dad earned a week’s worth of paid vacation.

“I was old enough to understand the big difference when my dad went to work where there was a union contract,” Lehman said.

The large aviation manufacturing plants in Wichita are historically unionized, said Schlechtweg, and have remained so despite the number of potential members whittled down over the decades by permanent job losses and the right-to-work law, which allows a new employee to opt out of paying dues while still benefiting from the gains of unions. For example, 8.7% of Kansas workers were union members in 2019, but 10.1% of employees were represented by unions, according to the Bureau of Labor Statistics.

Find a way to fight back

Union decline isn’t new in most Midwestern states where manufacturing work has dried up. But in the past decade, union membership rose overall in Kansas, the BLS data shows. Last year, Kansas saw the largest uptick in paying union members since 2009: a 1.7 percentage point jump, from 7% in 2018 to 8.7% in 2019.

In 2009, as the Great Recession hit Kansas in earnest and many were out of work, participation was at just 6.2% — its lowest point in the past two decades. In 2001, Kansas was at a high of 9.2% union membership. The BLS historical information for Kansas dates back to 2000.

Lehman attributed the eventual end of the Plaindealer to Wichita unions’ decline. When companies laid off workers en masse, unions lost dues-paying members and dealt with their own financial strain.

It reached a point where enough of the larger unions canceled their subscriptions. It was simply too expensive to keep printing the newspaper without that income.

Lehman thinks the pandemic and economic hardships are pushing workers to consider their needs when it comes to working conditions. She is among those leaders who believe that when unions shrink, members are more likely to lose their sense of collective power the Plaindealer worked to build.

Whether 2021 will see an uptick in new members remains to be seen. Organizing workers is difficult with restrictions on gatherings and large layoffs continue to hack away at membership, as in 2009.

But the working class is experiencing a new form of solidarity, some contend.

“I think workers are always going to find some way to fight back,” Schlechtweg said.

Megan Stringer covers labor, workplace issues and employment for The Wichita Eagle. This dispatch is part of a series called “On the Ground” with Report for America, an initiative of The GroundTruth Project. Follow her on Twitter: @megstringers

A version of this story appeared on USA TODAY on JANUARY 7, 2021