Can Georgia’s voting rights activists get out the vote one more time? 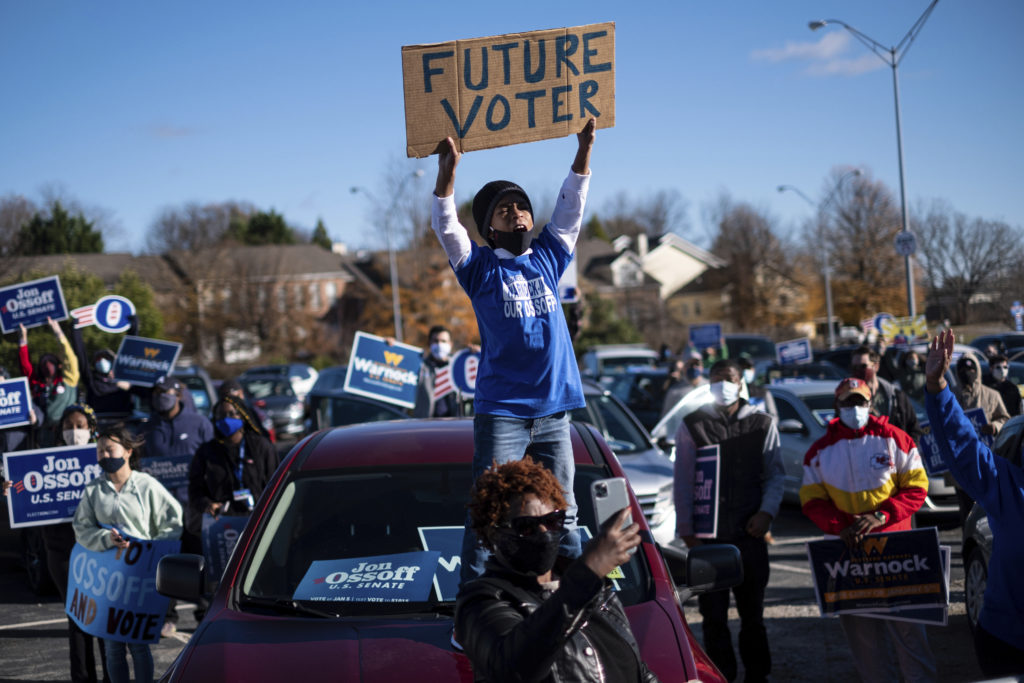 Hamilton Dickey, 8, stands on his mom's car during a rally for Democratic Georgia Senate challengers the Rev. Raphael Warnock and Jon Ossoff in Atlanta on the first day of early voting for the senate runoff Monday, Dec. 14, 2020. (Photo by AP/Ben Gray)

Leah Owenby, a lifelong Georgia resident, has voted in every presidential election since she turned 18. But Georgia’s upcoming Senate runoff is the first time a non-presidential race feels urgent enough for her to cast a ballot.

“The entire country is watching Georgia, and they’re all just waiting for January 5,” said Owenby.

The state’s revitalized voter turnout made for a thin margin that allowed former Vice President Joe Biden to beat President Donald Trump by fewer than 13,000 votes.

Now, as a swing state with a highly engaged electorate, Georgia’s election will help decide the path of American policy for years. This has prompted large-scale national attention on the four candidates vying for two Senate seats. On one side, the Democratic Party is sticking to the plan that delivered the state for them, by pouring resources into reaching, understanding and mobilizing voters while the Republican Party has set its sights on spotlighting claims of voter fraud that have gone unsubstantiated.

Fallon McClure, an election expert and Georgia-based organizer, says, “The national attention brought significant investment into Georgia that we haven’t seen before. We have always written off the South, but for the first time in a cycle, we have significant investment, and it’s paying off.” Spending for the Senate runoff has reached $500 million on election ads alone.

But this investment also means there are more eyes watching every twist and turn of the election. “There’s extra scrutiny on those who are newly registered, mail-in ballots, and we’re seeing voters being challenged by the tens of thousands.”

On December 18, the Cobb County Board of Elections heard and rejected a Republican Party complaint that challenged the eligibility of more than 16,000 voters. “It’s unprecedented but not unexpected. But at the same time, it’s a little harder to get this type of thing through under such watchful eyes,” McClure said.

“For Raffensperger and Kemp, they have been kind of a punching bag for Trump and those who align themselves with him in the state,” McClure said. “Raffensperger’s legacy is complicated. He is and will be known as a carrier of suppression, but he did push back and ultimately certified the presidential election and did the right thing.”

But McClure says Secretary Raffensperger is still toeing the line of voter suppression, using dog whistles like ‘legal vote,’ which she says isn’t a term we’ve heard before this year. In other words, Raffensperger continues to partake in party rhetoric that is tied to voter suppression and ultimately casts doubt on election results.

After the fallout, House Speaker David Ralston introduced an amendment that would make the Secretary of State a position chosen by the General Assembly rather than voters. The Georgia Assembly is still under Republican control. “The national attention speaks to this idea of the ‘New South,’ on a local level, Georgia is still very much a red state that has massive redlining and voter suppression,” McClure said.

The threat of violence at the polls has become more apparent after a man in Henry County, just south of Atlanta, was attacked and left bloodied after being confronted for holding campaign signs for Democratic candidates Jon Ossoff and Raphael Warnock.

But the state’s get out the vote organizers, and voters themselves are pressing forward. Organizers throughout the state are mobilizing voters in record numbers. Voter engagement in Georgia is at an all-time high. “I receive one or two election texts a day, and I’m getting calls and postcards too,” Owenby said. And this style of engagement seems to be working. On the first day of early voting, nearly 169,000 Georgians cast their ballots in-person as absentee ballot requests surpassed 1.3 million. Currently, in-person and absentee voting is set to exceed that of the general election.

“There’s almost like a national fever pitch to address policy, and the only way to get national policy through is with Georgia’s two Senate seats,” McClure said.

While turnout drives before the general election focused on Black Georgians, who account for almost half of Georgia’s electorate growth, Georgia organizers are still expanding their mobilization to key growing demographics throughout the state. Organizations like the Asian American Advocacy Fund (AAAF) have launched mobilization initiatives to reach Georgia’s Asian voters, the fastest-growing population in the state.

Aisha Yaqoob Mahmood, Executive Director of AAAF, said, “Asian voters came out in November because voters understood that our communities were on the line. This is no less true in January.”

For groups like AAAF, it is critical to meet voters where they are. This means recognizing that Asian American voters are not a monolith and cannot be mobilized as such. Georgia’s Asian American population represents a culturally diverse electorate with a diverse set of languages and communities.

Yaqoob Mahmood explained to NPR’s Morning Edition, “Within such a diverse Asian American community, we can’t just have one AAPI organizer and call it a day. We have to have very specific ethnic organizers that are doing the very important and very specific organizing necessary for some of these communities.”

Activists are reaching out to Asian, Native American, Latinx, and Black voters throughout the state through a grassroots infrastructure established over the last four years. However, a new focus has been placed on mobilizing young voters as well.

Georgia’s young voters made up 21% of the general election turnout, the largest number of any state. Organizations like Georgia Shift and the New Georgia Project are using digital platforms like TikTok, Twitch and Instagram to target this key demographic.

Tailoring voter engagement to each demographic has proven imperative for increasing voter turnout in Georgia. Toni Watkins of the New Georgia Project said, “There is no group of people that is not a group of voters.”

But tailoring communication strategies to fit the needs of so many communities is proving to be expensive. Non-partisan voter advocacy organizations, now in the spotlight of national conversations, are receiving an influx of donations and volunteers. For example, Fair Fight, founded by former gubernatorial candidate Stacey Abrams, raised $34.5 million from October to November. This is about the same amount the group raised throughout its first two years of existence.

McClure believes Georgians are ultimately putting everything on the line for this election. “Georgia’s runoff is the critical key to determining the next four years of American politics,” she said. “There’s a whole different level of engagement, and we’re redefining what election cycles look like. Georgian’s are thinking outside the box and the rest of the country is finally seeing it.”