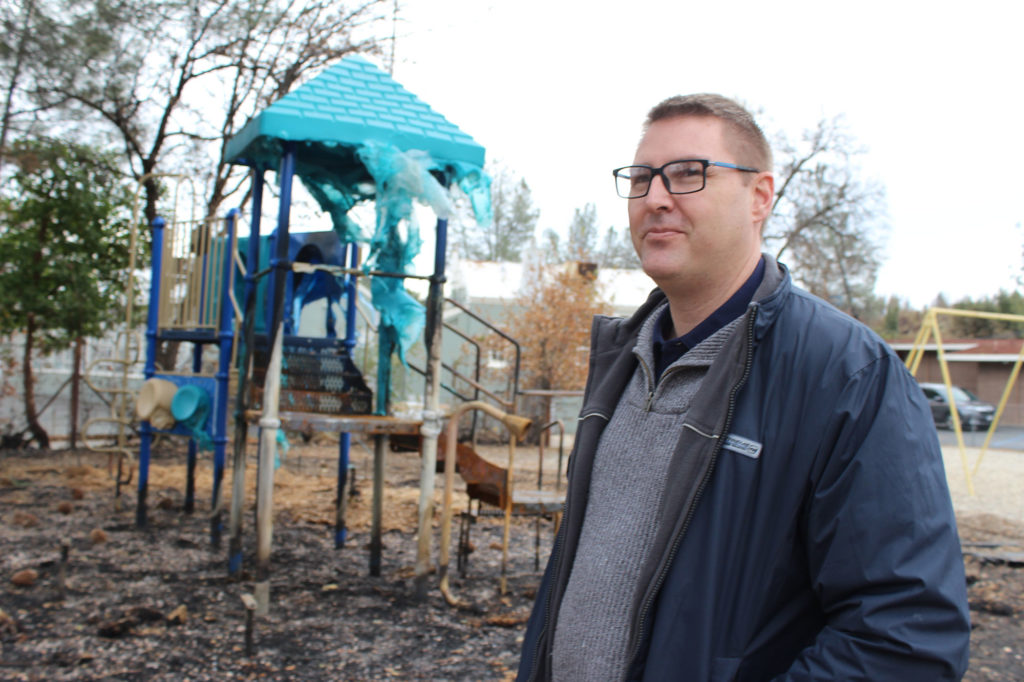 Before school principal Josh Peete led the caravan of teachers and staff around the police barricade, past the burned fire station, and to their smoke-stenched but still-standing classrooms, he issued a directive: Collect only what is needed to lead classes for a few weeks. Everything else must, for now, be left behind. The team nodded.

But once they arrived at Concow Elementary School, one thing led to another, and soon they were filling their cars not only with the requisite textbooks and supplies but also hula-hoops and stuffed animals. A fleet of Radio Wagons was thrown in. The lunch lady insisted on salvaging an ice machine as well as the salad bar. And before long, even Peete found himself wondering aloud whether there was room to load up the school’s musical instruments.

“I grabbed stuff that I thought would make them happy because it’s familiar to them,” explained Raynee Sewall, who runs the school’s afterschool program. “They’ve lost so much.”

Concow is one of a dozen public and charter schools in Northern California forced to relocate because of the damage caused by the deadly Camp Fire, which last month became the most destructive wildfire in state history when it burned 19,000 buildings and killed at least 88 people. After 25 days without school because of the fire, classes resumed today for Concow’s students and tens of thousands of others across Butte County, which encompasses the acutely damaged towns of Paradise, Magalia and Concow. School leaders say their primary task won’t be academic, but emotional: To create a sense of normalcy and community for students who abruptly lost both.

Researchers who study the mental health impacts of climate change say the more than 4,500 schoolchildren displaced by the fire are part of a new generation that will be disproportionately traumatized as rising global temperatures increasingly wreak havoc on communities. In Butte County, where the Camp Fire raged, educators are arming themselves with information about how to support traumatized children and positioning their schools as refuges for those living through crisis.

“These kids are at the tip of the spear,” said Lise Van Susteren, researcher and co-founder of the Climate Psychiatry Alliance. “For years now climate scientists have been saying that all these extreme weather events were in store. And now we are in an era of consequences. So the trauma on children is just unimaginable.”

While no single event can be linked definitively to climate change, scientists say the circumstances surrounding the Camp Fire were clearly exacerbated by the phenomenon: Evidence shows that the human-made changes to Earth’s atmosphere have warmed up California’s autumn months and shortened its rainy season, drying out the soil and ponderosa pine cover of the Sierra foothills. According to the National Climate Assessment issued by federal agencies last month, climate change is responsible for half of the forestland burned in Western states since 1984. The children displaced by the Camp Fire may see worse in their lifetime: The California Climate Change Assessment warned that if global warming is not curtailed, wildfires will strike far more frequently and with greater ferocity by the end of the century.

The link between climate change and children’s mental health was described in no uncertain terms by the National Climate Assessment’s chapter on human health: “Disasters present a heavy burden on the mental health of children when there is forced displacement from their home or a loss of family and community stability.”

But the report also offers advice about how to minimize the damage: “Social cohesion, good coping skills, and preemptive disaster planning are examples of adaptive measures that can help reduce the risk of prolonged psychological impacts.”

Over the last week, Butte County schools have made proactive efforts to do just this: Thousands of teachers and school staff have gone through trainings from childhood trauma experts so they can be a resource for their students; additional therapists have been on hand to help staff navigate their own feelings about the disaster. Trauma teams made up of psychologists and other professionals have been placed at Concow and other schools for the foreseeable future. And the county will provide transportation to students who lost their homes but wish to stay in their home schools, hoping that the stability of reuniting with friends and teachers will help them heal.

The Butte County Department of Education expects about half of the affected students will remain with their home schools; the rest will disperse to other districts where their families relocate.

The 12 displaced schools have found other homes as well; last week, Concow Elementary moved to an old school campus that was shuttered in 2010. The middle and high schools in Paradise, where seven of the eight schools in the district were displaced by the fire, will temporarily take up residence in a shopping mall, until a more permanent solution can be found.

Paradise High history teacher Matt Sutter said he’s relieved to be reunited with his students no matter the setting, and thinks it will help them feel like some portion of their life is getting back to normal.

“Granted, school will be in the mall for crying out loud, so it’s not exactly normal,” he said. “But at least we’ll all get to see each other.”

Kelly Staley, superintendent of Chico Unified School District, the largest district in the county, expects hundreds of displaced students to show up to classes in her district today. In anticipation of this tumult, all 1,550 members of her staff – from bus drivers to biology teachers – went through multiple days of crisis training last week. Staley said the experts have emphasized the crucial role educators can play in helping students re-establish their sense of stability and routine, and spotting and supporting struggling students.

“It’s not just the kids who lost their homes that we need to support,” she said. “Lots of children previously lived in a home with just Mom and Dad, and now all of a sudden, aunt, uncle, grandma, grandpa and cousins are all living in their home too. That also creates a disruption for children.”

In an all-staff meeting last week, Concow’s principal Peete encouraged his staff to make the first days of school especially engaging: “The first week back at school won’t be super academically structured. We need to fill it with fun things, maybe field trips, group activities. Things that get the kids excited to be picked up for school.”

Concow Elementary is the sole school in the Golden Feather School District, and Peete serves as both principal and superintendent. About half the district’s employees lost their homes, including him. He hasn’t taken a tally of his 62 students, but he said a large majority of them did as well. He said the school has always been a refuge for Concow’s students, the majority of whom qualify for free and reduced lunch. Its objective now is to re-instill that sense of safe haven, despite the change in venues.

The shuttered school they moved into lacked even toilet paper, let alone curricula, so Peete planned the mission to rescue supplies from Concow. This required special permission to travel through the evacuation zone, still closed to the public as officials searched for human remains and removed unsafe detritus. It was many of the school staff’s first trip into the burned zone after the fire.

They found Concow Elementary lacking electricity and reeking of smoke. Firefighters had managed to save the classrooms, but outer buildings burned. A playground structure had melted, and wisps of plastic were strewn in the gravel around it. And the school’s pumphouse had been destroyed, leaving the school without running water.

Brian Darden, who teaches fifth through eighth grades at the school, said he tried to be judicious about what he gathered, but admitted he picked up some items that weren’t strictly necessary for classes.

“I grabbed some of the posters out of my old classroom, and I even placed one of the posters in the exact spot behind my desk that it was before,” he said. “You can’t recreate the environment but you can give the kids an impression of familiarity so hopefully they feel at home.”

Later in the year Darden will reach the portion of his curriculum about climate change. He’s curious how the children process it, having lived through a climate-related disaster. He suspects it will bring the phenomenon out of the abstract for them.

Van Susteren said this could prove a crucial part of their healing. Children often are left feeling they have no agency when terrible things happen. Learning what happened and what they can do about it, even in small ways – say, by learning about and then lowering their carbon footprint – builds their resilience, she said.

“People often work with children on their feelings, but they forget about helping them find empowering action, which is essential for resilience,” she said. “That’s the bridge to that hopeful place, where they can say to themselves, ‘I’ve done everything I can to make things better down the road.’”

Katie Worth is a GroundTruth Fellow and a 2018 O’Brien Fellow in Public Service Journalism at Marquette University’s Diederich College of Communication.

This story was produced as part of a collaboration between FRONTLINE and The GroundTruth Project examining climate change and its impact on women and children.

Correction: A previous version of this story incorrectly said that seven of eight schools in Paradise burned down. Two campuses in Paradise Unified School District burned to the ground, the others could not host students due to fire damage.

A version of this story also appeared on FRONTLINE on December 3, 2018