A call for courage in journalism at 75th duPont Awards 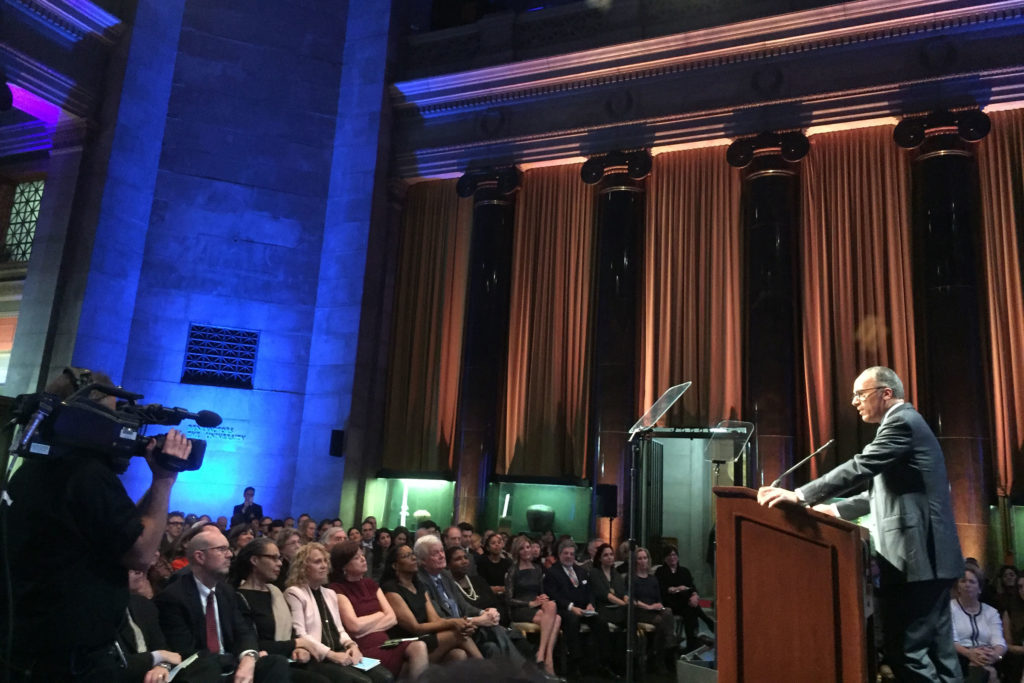 NEW YORK — Some of journalism’s living legends invoked the spirits of departed news greats like Edward R. Murrow and Gwen Ifill at Columbia University, the “cathedral of journalism,” at the 75th Alfred I. duPont Awards on Wednesday night.

The GroundTruth Project was honored with its first duPont Award for film and podcasting on a successful girls’ school in Afghanistan, joining PBS FRONTLINE, NOVA, NBC, HBO and Fusion on a night that recognized the pursuit of truth through fact-based reporting is under threat. It was a moment to band together in the great hall of the Low Memorial Library, modeled after the Pantheon temple of Rome.

Many of the assembled journalists responded to the Trump administration’s attacks on the press, targeting journalists and denying access while repeating provably false statements on immigration, crime, alleged voter fraud and even the size of his inauguration crowds from his presidential pulpit while declaring seismic policy shifts.

“Gwen’s spirit is telling us: Take the heat,” said Charlayne Hunter-Gault, a close friend of Ifill, the renowned PBS journalist who died of cancer in November. Friends and colleagues wept as Hunter-Gault described Ifill’s religious faith in pursuing truth as co-anchor of PBS NewsHour and host of Washington Week in Review while undergoing chemotherapy.

Ifill was a “preacher’s kid” who fought discrimination as an African-American woman breaking into television news in Boston.

Bill Moyers, who served as a Baptist pastor before he became a public affairs officer in President John F. Kennedy’s administration, offered what sounded like a eulogy for a past era in America.

“We journalists need each other. An alien force has arrived from the galaxy Orwell,” said veteran journalist Bill Moyers, referring to the days-old Trump administration.

After Kennedy’s assassination served as President Lyndon Johnson’s press secretary from 1965 to 1967 as the Vietnam War escalated. He returned to journalism in 1967 and has stayed there for 50 years, his reporting continually returning to abuses of power, matters of faith and inequality. Moyers told the audience that he is “too old” for the Trump era and wished the journalists in the audience luck in a time of eroding norms.

“Democracy can die from too many lies,” he said ominously. The Economist downgraded the U.S. to a “flawed democracy” this week in its Democracy Index, citing “weak governance, an underdeveloped political culture and low levels of political participation” that predate the Trump administration.

Trust in institutions, including the media, sits at record lows.

Ira Glass, host of NPR’s ‘This American Life” pointed to this reality in his remarks.

“How do we present fact-based reporting to people who do not trust any of this in this room?” Glass asked.

Christiane Amanpour, CNN’s chief international correspondent and one of the most accomplished journalists in the world, was fierce in her response to the Trump administration’s falsehoods.

“When you have ‘alternative facts’ coming out of the White House… you have to resist,” Amanpour said in an interview before the awards ceremony. “This is not 1984.”

And as she helped to introduce the evening, she continued the rallying cry.

“You have to be brave enough to keep fighting,” she said. “Because if you bend over, you have only yourself to blame.”