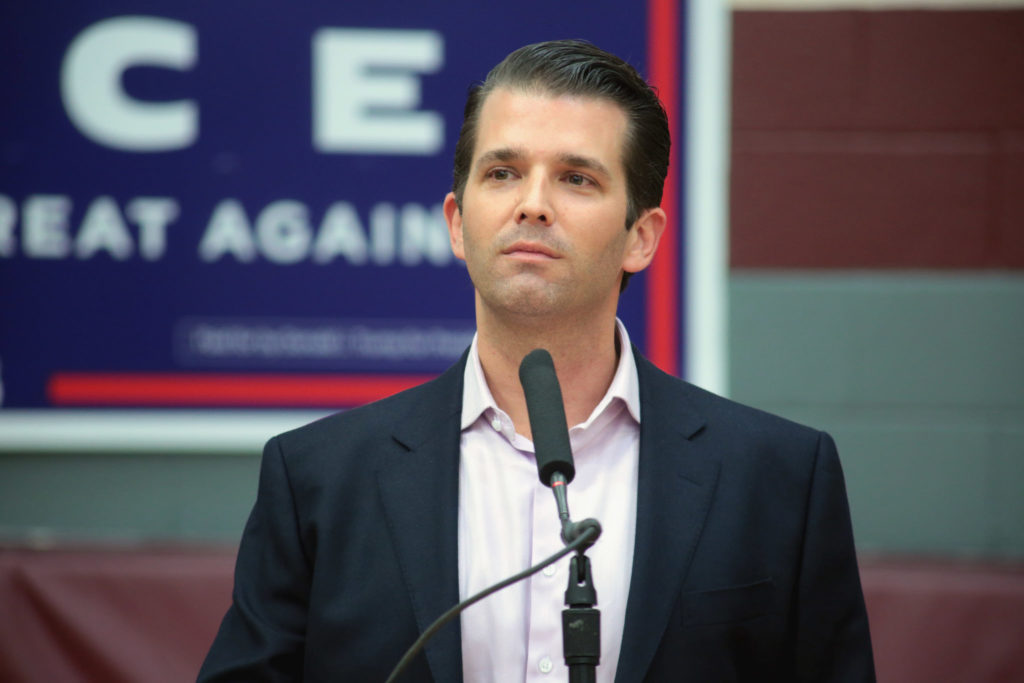 The responses to revelations that Donald Trump Jr. met with Russians claiming to have damaging information about Hillary Clinton have been vastly divergent depending on a person's media diet. (Gage Skidmore/Flickr)

WASHINGTON — In one American reality, Donald Trump, Jr.’s emails are a smoking gun served on a silver platter, incontrovertible evidence of the Trump campaign’s collusion with Russia.

In that reality, President Trump is the Richard Nixon of the digital age, perhaps even a traitor. The election was hacked. Criminal charges await the president and his entourage. Impeachment must proceed immediately.

In another simultaneous reality, Donald Trump is the CEO of America trying to take on the entrenched interests of Washington and unfairly targeted by “fake news” about his son, Donald Jr., and his son-in-law, Jared Kushner.

These young go-getters are being persecuted for having the brilliance to meet with a Russian lawyer and former Soviet spy to collect opposition research on Hillary Clinton at Trump Tower last June. Clinton herself is the enemy, and anything done to keep her from the White House served the greater good.

This goes beyond a difference of opinion. The filter bubbles that have enveloped America are proving impermeable. Digital technology that separates and misinforms us strengthens its hold just as the country faces unprecedented allegations about its leadership. Truth too often loses out to belief. Extremist viewpoints hold greater sway, further dividing the camps in what legendary reporter Carl Bernstein called a “cold civil war.”

Maybe we would all like to pierce the bubbles and start talking to each other again, to prevent Bernstein’s war from spreading. But for now we live inside them. And it is increasingly becoming clear that we do so at our own peril.

For just one snapshot, take the 9 p.m. slot on weeknight cable news, when Rachel Maddow and MSNBC are head-to-head with “The Five” on Fox News. If you tuned in to MSNBC lately, you saw host Maddow rip to shreds the Trump administration’s response to allegations of collusion, offering warnings like, “Don’t listen to what the Trump administration says about their own behavior.”

Over on Fox News, you’d have heard first about the tragic death of American soldiers killed in a helicopter crash and eventually gotten to “The Five” co-host Greg Gutfeld offering a full-throated defense of Trump’s eldest son.

“You could argue that Donald Trump, Jr. was doing a patriotic duty by having this meeting because what if that information revealed illegal campaign finance activity by a major politician,” said Gutfeld on Thursday night, referring to Clinton.

“He was acting on behalf of the country’s best interests,” Gutfeld continued. “I think that Donald Trump, Jr. is an American patriot and if you question him, you’re going to hell.”

For believers in American consensus around shared values, this is hell already. We did not cure the media and technology-driven polarization that made U.S. voters so susceptible to disinformation techniques ahead of Election Day.

And so where we were already bitterly divided on issues like abortion, health care and gun control, we now have divergent visions of the very integrity of the office of the President of the United States of America competing for supremacy.

On the “Trump Internet,” the president can do no wrong. Reporting that indicates wrongdoing by President Trump or his allies is simply evidence of mainstream media bias. The idea that the Trumps could have colluded with Russia to win the election is a conspiracy theory. Real-life supporters and automated bots tag team to counter alleged misdeeds and attack the credibility of media outlets that report them.

Among #TheResistance, Trump can do no right. Not only has he sold the U.S. to Russia for spare parts while doing his best to dismantle American democracy, but he is an unrelentingly cruel buffoon despised by all but the most tyrannical world leaders, a man-child who takes pleasure in passing lies and making children sad.

In a fact-based reality, we know some things are true:

But as Donald Trump, Jr.’s meeting demonstrates, no matter what information surfaces, Trump supporters are likely to remain in a universe of information (true or false)  that reinforces the idea that the administration simply seeks to Make America Great Again by any means necessary. Opponents and skeptics will likely continue to believe Trump is out to destroy the country and perhaps the world for the benefit of himself and his partners.

So even if the current investigations yield concrete evidence of criminal wrongdoing by President Trump and his associates, a significant percentage of Americans will continue to believe that Donald Trump, Jr. is a patriot, that the media reporting on the evidence is part of a conspiracy that includes Hillary Clinton, the Obama administration, former FBI director James Comey and the FBI itself.

That is the power of the filter bubble. And our bubbles divide us and make us weak. It’s far easier to communicate within our own realities than across them. It’s far easier to dismiss one another than to vet and strengthen one another’s ideas. We’re more vulnerable to bad information and manipulation, which is exactly how experts believe Russia influenced the U.S. presidential election in the first place.

As Republican Sen. Rob Portman told a crowd at a #DisInfoWeek event in Washington last month, “Disinformation is a threat that’s broader than one party, one president, one nation. This is not just about Donald Trump, it was a problem before him and it’ll be a problem long after his term in office.”