With Brexit, UK voters may put millennials’ futures at risk 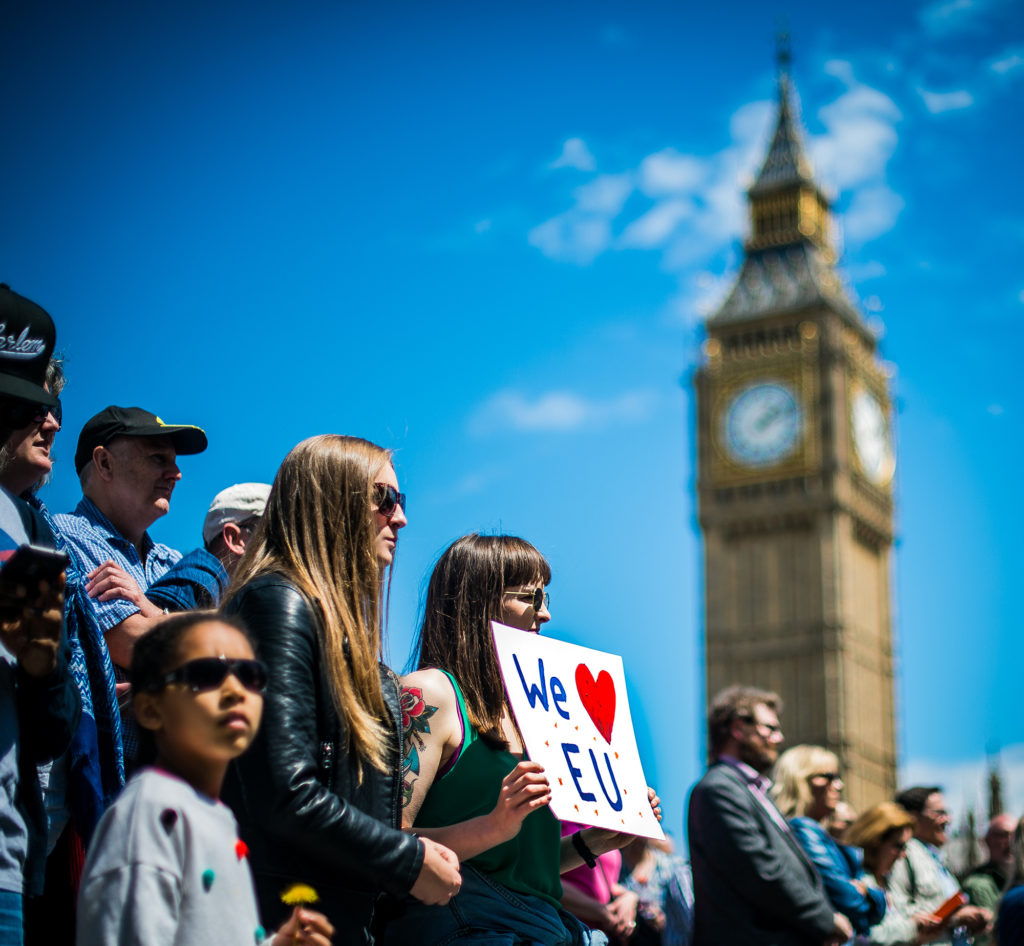 A young woman holds up a sign in favor of the European Union at the 'March for Europe' protest on July 2, London's Big Ben visible in the sky above. (Photo by Garon S/Flickr User)

LONDON — At 4 o’clock this morning, I opened one eye to Twitter to check in on the results of Britain’s referendum on exiting the European Union, known as the Brexit. Two seconds of scrolling jolted me awake. I saw that while I had dozed for just a couple hours, the whole world had shifted.

I returned to the BBC’s all-night coverage, watching as the anchors droned into the wee hours of the morning and steadily beat a drum of looming chaos. By a vote of approximately 52 percent to 48 percent, the United Kingdom had voted to Leave.

The result of the U.K.’s referendum has devastated Remain supporters across the country and Europe, specifically those under age 35.

I’m scared. Jokes aside I’m actually scared. Today an older generation has voted to ruin the future for the younger generation. I’m scared.

So all the old people gave us a future we didn’t want. You’ve all had your careers, why screw it up for us pic.twitter.com/KDyAYU5OKD

This vote doesn’t represent the younger generation who will have to live with the consequences. #NotInMyName

The fact older generations have reaped the benefits & pulled the EU from my generation? Furious. My generation wanted in. It’s our time.

Millennials, both U.K. natives and Europeans working and studying in Britain, favor staying in the EU by an enormous margin, will now lose the opportunities that open borders promised them, on either bank of the English Channel.

Leaving was a decision made by a mostly white, older, rural English voter base who millennials say have shown a depressing lack of foresight or consideration for the younger generation or their immigrant neighbors, friends and colleagues. They voted — sometimes without fully understanding what they were voting for — without answers to questions about what comes next, for Britain or anyone else.

We’ve left behind a failed political union. We can now rejoin the world as an independent, self-governing nation.https://t.co/oqMbzLWhqO

The EU is a big idea; a revolutionary one, and still relatively new. Through understanding and education, the hope was always that the U.K. and the other big, financially established countries would dive in to help the smaller ones struggling to adapt to the concepts of democracy and the free market late in the last century.

Europe could only ever function as one unit if all parties fully committed to the greater good, in which case the EU might successfully prove the theory that through modern, flexible economic and political partnership, a formerly antagonistic group of sovereign nations could come together in the best interests of their common goals: free movement of talent, goods and ideas, safety, financial security and human rights.

It’s apparent that it was, in fact, Boomers who have given up on the dream of common European interests, and were the reason the months-long referendum resulted in a vote to withdraw membership from the EU.

As the Leave camp came through the night triumphant, and it’s the under-30s who will spend the next 15 years cleaning up the mess that’s yet to come. In the first 12 hours:

The fact is that without U.K. membership in the EU, Germany essentially stands alone at the head of the table, and the whispered fear is that even German authority isn’t enough to hold the bloc together in the face of the massive challenges the EU Commission is up against.

Brussels also faces a human rights crisis from right-wing politicians who have a choke hold on young constituencies in Poland, Hungary, Slovakia and elsewhere. The migrant crisis and mass under-employment of refugees needs attention, money, and new ideas. And without the continued influx of capital from British coffers, there will be no hope of resolution to the crippling financial mess and youth joblessness facing Spain, Portugal, Italy and Greece.

The U.K. result could trigger a domino effect from other right-wing eurosceptic parties in France, Italy and Austria, as UKIP leader Nigel Farage gleefully told news cameras early this morning. The show of such massive support for Farage, a racist buffoon with bafflingly high popularity numbers, is beyond troubling.

Farage and his sidekick, the cartoonish former London mayor Boris Johnson, won the day through a toxic mix of xenophobia, overblown immigration fears, bad economic policies based on failed conservative ideas, and a media circus that resembled a round of “Two Truths and a Lie.” The result has Britain flat on its back with confusion, uncertain how to move forward.

But the real horror will be the attempts by other countries to replicate today’s events in Britain, moves that could tear the EU apart at the seams and have economic fallout that resonates globally, ultimately coming to rest on the shoulders of a generation that never asked for this.

I personally feel wholly unmoored by the result, a swell of populist pessimism that many underestimated.

I have lived in London on and off for the past two years. And as a second-generation Hungarian-American who spent a good amount of my childhood experiencing the evolution of post-war Eastern Europe, I possess a special kind of optimism about the EU, the peace (and sometimes havoc) it brought, and its promise of economic and migratory cooperation across borders. But the rug has been pulled out before Europe could deliver on the hope that has thus far held it together.

Is my shock due to a case of youthful idealism? Did I take it for granted that my generation would have the ability to live and work anywhere we wanted, in a Europe that looks drastically different from the one my grandparents were forced out of?

There are a lot of issues, risks and annoyances that are inherent to the European experiment and sure, it’s not perfect, by any means.

Now the EU may need to fight for its existence. As the world reels, the chips have yet to fall.

Alex Pearlman is a journalist based in London. She’ll be reporting in-depth on Brexit in the coming days. You can follow her on Twitter @Lexikon1.