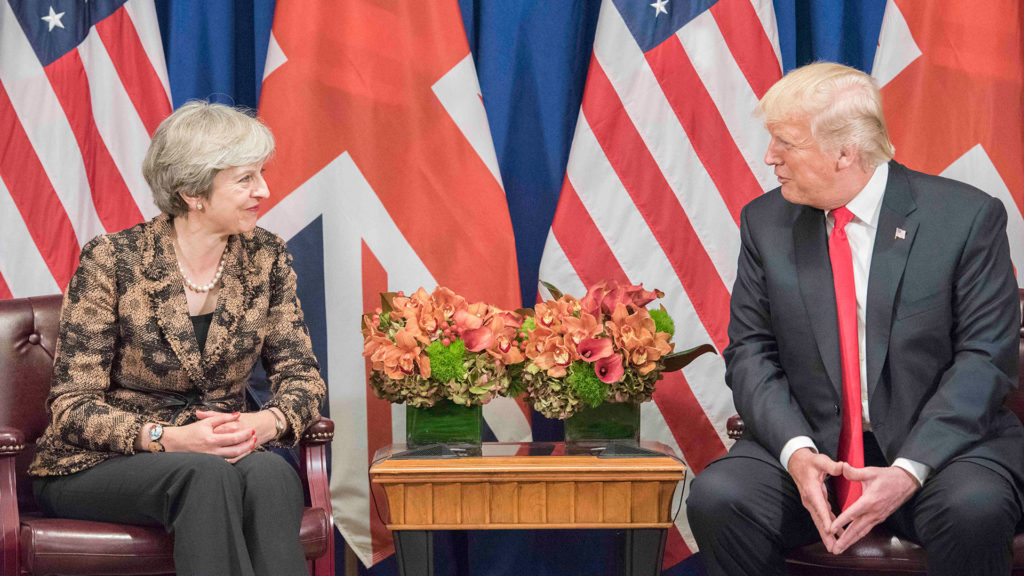 President Donald Trump and British Prime Minister Theresa May at the UN General Assembly in 2017. (Photo by Lee Goddard/Flickr)

They are the two political cataclysms of our time — Brexit and Trump.

And this week, we were left struggling to find signal amid all the noise that both are generating at home and around the world.

No matter where you stand on these seismic shifts across our political landscape, it is undeniable that the United Kingdom’s halting steps toward leaving the European Union and the United States’ election of a president consumed by one criminal investigation after another have left the two most powerful Western democracies bitterly divided and teetering on dysfunction.

The only one who seems to be smiling through the transatlantic discord is Russian President Vladimir Putin. In both the U.K. and the U.S., it has become increasingly clear that Russia meddled in both the Brexit vote and the American election in 2016. If there is one clear finding of the Mueller report, at least according to the 4-page summary released this week, it is that Russia interfered with the American election in an effort to bring Donald Trump to power.

While Mueller apparently found no criminal conspiracy between Trump and Russia, his findings do not exonerate the president and left a lot of unanswered questions about why members of his campaign lied about their contacts with Russian officials during the 2016 election. And Mueller’s report left no doubt that Russia did in fact meddle. Similarly, the “Leave” campaigners in the UK are facing mounting questions on the other side of the Atlantic as the Guardian, Buzzfeed and other news organizations have zeroed in on a Russian campaign to interfere in support of Brexit.

Indeed, the embattled British Prime Minister Theresa May, in November 2017, back when she stood more confidently in parliament, said in a major foreign policy speech, “Russia is seeking to weaponize information, seeking to deploy its state run media organizations, to plant fake stories and photoshopped images in an attempt to sow discord in the West and undermine our institutions.”

“So I have a very simple message for Russia: We know what you are doing and you will not succeed, because you underestimate the resilience of our democracies, the enduring attraction of free and open societies, and the commitment of Western nations to the alliances that bind us,” she added.

Her words echo more faintly today as the shrill sounds of discord across the UK and Europe continue to drown out the classic British spirit of keeping calm and carrying on. If  these two Western democracies, bound by history and ideals, are going to survive the tumult we are in, we have to ask ourselves: How did Russia get away with this, and what are we doing to ensure that it never happens again?

It is worth noting that the UK and the U.S. are not alone, there have been reports of Russian attempts to influence elections in France, Spain and many other countries, always in favor of candidates that support closing their societies to trade, migration and multilateral responses to global challenges.

I made the case for a global response to Russian interference in an interview this week with Boston Public Radio. We need to look at our allies and think of how are we going to get out, together, of the environment of political deadlock and divisiveness that the Russians exploited and exacerbated.

We’ll continue to look at this issue and its relationship with the wave of populist authoritarian governments sweeping the world through our project, Democracy Undone, and the reporting fellowships we are offering with it. If you have an idea for a podcast about the rise of autocratic leaders in places like Brazil, Philippines, Poland, Egypt, India and, yes, right here in the United States, you need to apply for this fellowship. We are looking for compelling audio narratives that will explore the effect of authoritarianism and the efforts to resist these advances. The deadline of April 7 is fast approaching, so apply now!