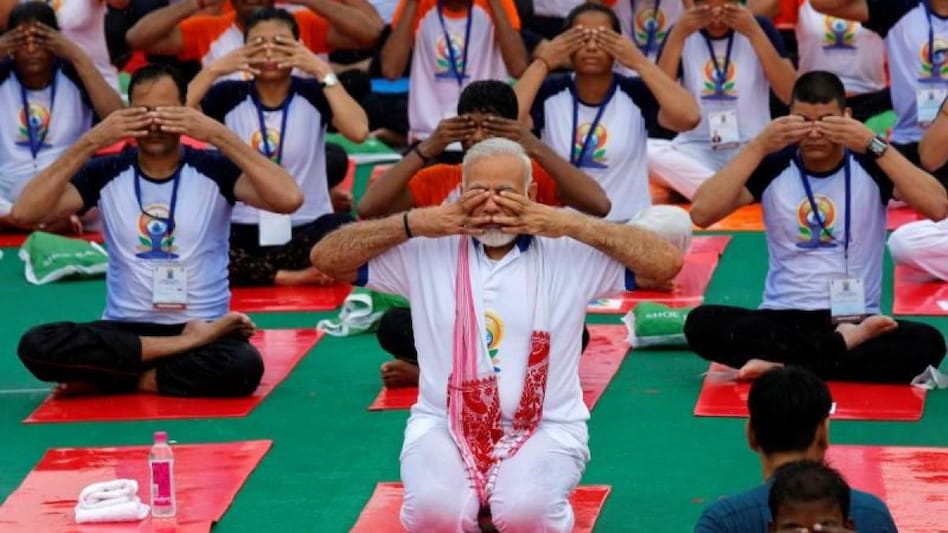 New Delhi: Prime Minister Narendra Modi led the observance of the eighth International Yoga Day from Mysuru early this morning. He, his colleagues in the Cabinet and in the Bharatiya Janata Party all set out to mark the occasion in various parts of the country – reviving an annual ritual that had to take a break in the first two years of the COVID-19 pandemic.

Yoga is one of the five systems of alternative Indian medicine under India’s AYUSH efforts, including via its Ministry of AYUSH. ‘AYUSH’ stands for ‘Ayurveda, Yoga, Unani, Siddha and naturopathy, and Homoeopathy’. Yoga alone among them is yet to be regulated under any Act of Parliament, however. All other systems are governed by the National Commission for Indian System of Medicine (NCISM) Act 2020.

Yoga and naturopathy are taught at the undergraduate level in 70 medical colleges in 14 states. The Mangalore University in Karnataka first floated this course in 1989. Today, these subjects are also taught at the postgraduate level.

The institutes that have these courses aren’t on the fringe. The National Institute of Mental Health and Neurosciences also offers PhD courses on the topic. Those who take these courses ‘treat’ patients without any pharmacological interventions.

Despite this history of formal training, Yoga and naturopathy practitioners aren’t required by a national Act to register before they start practising. So no one who has completed anything between a full-time course to a few weeks’ certificate course – or hasn’t studied anything at all – can be held liable for practising without a licence.

Seventeen states have passed their own registration laws – but in the absence of a national Act, a practitioner registered in one state can’t practise in another, so the effect of the registrations is uneven.

The remaining states don’t have any regulations in any case – which could allow “a number of quack practitioners” to mushroom “with the growing demand for Yoga and naturopathy clinical practice, putting the public at large at risk of malpractice and bad health,” a Parliamentary committee had warned in November 2019.

The Indian Naturopathy and Yoga Graduates’ Medical Association (INYGMA) has been aware of these ill-effects in the course of its work. Its president Naveen Visweswaraiah and vice-president Rajesh Kumar Singh said they encounter people almost every day with a condition made worse by misguided guidance from an unregistered practitioner.

“If a person with hypertension practises Kapalbhati, her blood pressure will shoot up,” Visweswaraiah told The Wire Science. She “may also get a stroke – but the untrained or insufficiently-trained Yoga practitioners don’t tell this to people.”

Similarly, Bhastrika – also known as hyperventilation – can trigger seizures in those who suffer from epilepsy, he said. “Now when [a person suffering from seizures] comes to us, we do make her do Bhastrika and also carry out an electroencephalogram investigation, so that we know which part of the brain is creating the problem.”

“But we do this in the extremely controlled settings of a lab. If an [undiagnosed] patient is sitting in a Yoga class, she can actually get a seizure because of Bhastrika. She can also die. And people will think she died just like that,” he added.

Singh, the vice-president, said, “There are centres which distribute brochures claiming 100% treatment of a disease with Yoga, when it might not be possible in that condition. All this is happening and we, the trained doctors, are helpless.”

The fundamentals are not difficult to understand, both Visweswaraiah and Singh said. They compared Yoga to a drug: just as a drug has contraindications and dose limits, so does the practice of Yoga. ‘More is better’ doesn’t work and is often harmful.

But in the absence of registration – leave alone a law governing the practice of Yoga – it’s not possible to discuss dosage, indications and side-effects.

The UK, the US and Australia have been reporting the adverse effects of Yoga practice. But India, the Vishwaguru that gave the world Yoga, is not interested in regulating its practice –  both as a fitness regimen and as a medicinal system.

The Indian government might disagree with this assessment, however. (AYUSH ministry secretary Rajesh Kotecha is yet to respond to a list of questions The Wire Science had sent him.) This is because the government has been kicking the Yoga regulation can down the road for eight years.

Narendra Modi became India’s prime minister for the first time in May 2014, and by December, had transformed the Department of AYUSH into a Union ministry. But in August that year, the department shot off a letter to the health secretaries of all states that the Union government was planning to regulate the education and practice of Yoga under the same Act that covered all other alternative systems.

This was the Indian Medical Central Council Act 1970. But when the government replaced this Act with the NCISM Act six years later (with no significant progress in the interregnum), the latter had no scope to regulate Yoga and naturopathy.

The government’s rationale, provided to a standing committee that evaluated the NCISM Bill: Yoga and naturopathy are “drugless” systems while the other AYUSH systems are drugful, so they couldn’t be regulated by the same Bill.

“The committee is not at all convinced by the reasons given by the ministry,” committee members wrote in their report, which concluded with a recommendation to include a specific clause in the same Bill for Yoga and naturopathy.

The AYUSH ministry ignored this recommendation. It also ignored a 2017 NITI Aayog report which said, “Given the increasing recognition for [Yoga and naturopathy] in potentially making an important contribution towards health promotion, well-being and disease prevention, we have recommended their inclusion in the NCISM.”

Indeed, the AYUSH ministry has veritably overlooked the recommendations of a wealth of reports. More than 50 MPs cutting across party lines wrote to Prime Minister Modi in 2020 asking him to regulate the practice of Yoga and naturopathy. INYGMA has also appeared before several government committees and made representations to the AYUSH ministry.

(The Wire Science has copies of all the relevant reports and the letters by some of the MPs.)

A Bill for Yoga

In a judgement dated February 3, 2022, the Kalaburagi bench of the Karnataka high court asked the Union Ministry of AYUSH to respond to a representation by a Girish Patil within three months. Patil, a Yoga and naturopathy practitioner, had approached the court seeking limits on the practice of Yoga.

The Union ministry wrote to Patil on May 19, 2022, saying, “A [separate] Bill with respect to regulating and standardising the education and practise of Yoga and Naturopathy is under consideration in this Ministry.”

The same ministry had told a Parliamentary committee three years earlier that it had decided to not have a separate Bill “​​to empower the existing mechanism of National Board for Promotion and Development of Yoga and Naturopathy under Ministry of AYUSH to strengthen the aspects of regulating education and practice of Yoga and naturopathy”.

“It is a lollipop that has been served to us for ages now,” INYGMA’s Kumar said. “They have never shared a draft [of this Bill]” nor specified “which government board or committee recommended to them that a separate Bill was needed.”

If the ministry had been serious, Kumar added, it would have at least consulted INYGMA and other similar groups, since they have been fighting for regulations for almost a decade under the Modi government.

Kumar himself doesn’t want a separate Bill – just like the Parliamentary committee didn’t. Their reason is that such a thing would require a separate commission to monitor its implementation, which in turn would have significant financial implications for a sector with a population lower than 3,000.

In its reply to Patil, the ministry also said that Yoga and naturopathy were not fit to be considered Indian ‘systems of medicine’’ because, again, they are drugless. This is a strange argument – especially since Prime Minister Modi has made Yoga a staple of his message of national pride.

This said, the AYUSH ministry created a ‘Yoga Certification Board’ through a simple communiqué in 2018. This board introduced multiple certificate courses ranging from a few hours to a couple weeks. The courses have no prerequisite qualifications except graduation from high school.

“This is like certifying quacks even if they don’t become doctors,” Visweswaraiah said.

In its courses, the board isn’t very different from other centres around the country that offer similar benefits – and all of them still function beyond the remit of a law or policy that specifies what is good Yoga and what isn’t. This in turn keeps the spotlight on the absence of such law or policy and the Indian government’s reluctance to regular Yoga.

Indeed, Prime Minister Modi used the first and second Yoga Days to build soft power for India and included other countries in its observance. But if Yoga practitioners are demanding something as basic as regulation on the eighth Yoga Day, it’s hard to believe the difficulties lie in framing the text for a government as shrewd as the current one.

Note: This article has been updated since publication with two corrections – on the date the Union ministry wrote to Girish Patil and the nature of the investigation carried out by the INYGMA on some patients.