Bonding and belonging in the Bronx’s 40th Precinct 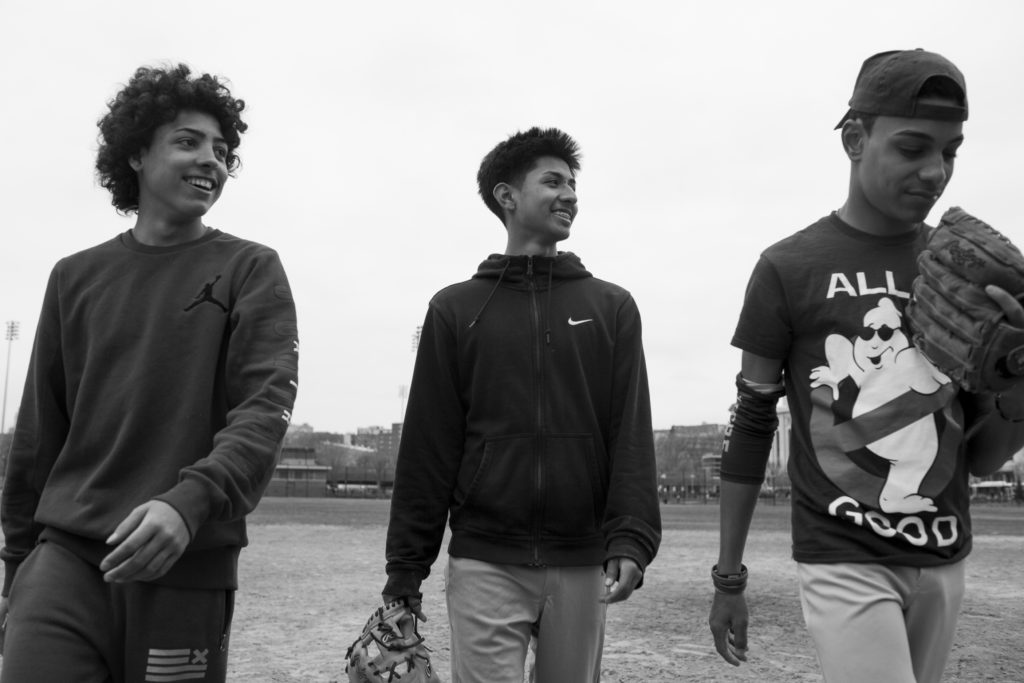 Chavi Leon (right) and his friends practice baseball in front of Yankee Stadium, March 26, 2016, Bronx, New York. The friends meet once a week to practice at the fields together. (Photo by Sarah Blesener/GroundTruth/Alexia Foundation)

This collection of photos follows a group of 14-year-old boys, focusing on adolescence and coming of age in the South Bronx. Though the murder rate has fallen to a historic low in New York City, but the 40th Police Precinct in the South Bronx has proven to be an exception. Stories of isolated poverty and gang violence in the neighborhoods of the 40th Precinct routinely make headlines.

Photographer Sarah Blesener wanted to focus on something beyond these headlines: the teenagers who will be the ones to define the Bronx’s future. Blesener focused her camera on the life of the 40th Precinct that doesn’t make the headlines — life experienced on basketball courts, in subways, on living room floors, in high schools, in music classes, in playing video games and teenagers’ normal activities.

Mott Haven, located in the 40th Precinct, is one of the most at-risk communities for children in New York City, based on factors such as childhood poverty and high school graduation rates. But in the midst of a harsh environment, Chavier “Chavi” Leon and his friends found a haven in one another. Their friendship is an essential cornerstone for all six boys. They rely on each other when their families cannot afford to buy food, they help each other get back from school, and they offer a second family of support and trust. This project explores that bond and provides a different perspective on an area of New York that routinely receives negative attention.

It was by chance that I met this group of boys. I met Chavier through his older cousin in the Bronx, and for some reason, Chavier invited me into his world. Over the next six months, I spent every free day I had with him and a group of five other boys. We had an instant connection, and they gradually allowed me to become a part of their lives.

I began the project by giving the boys disposable cameras and journals, and asked them to document their own life. Involving them directly in the project from the beginning gave me a unique look and insight into their lives. Chavier is now fifteen-years-old and is in his sophomore year of high school.

My aim is to continue following Chavi and his friends throughout high school. I want to follow their experience growing up in Mott Haven, and to document their changes together and alone. This project has stopped becoming a project for me. I am now close friends with all of the boys involved, and Chavi’s home has begun to feel like a second home to me. I’m routinely invited to his family’s holidays and get togethers, and making this project a long-term documentary is only natural.