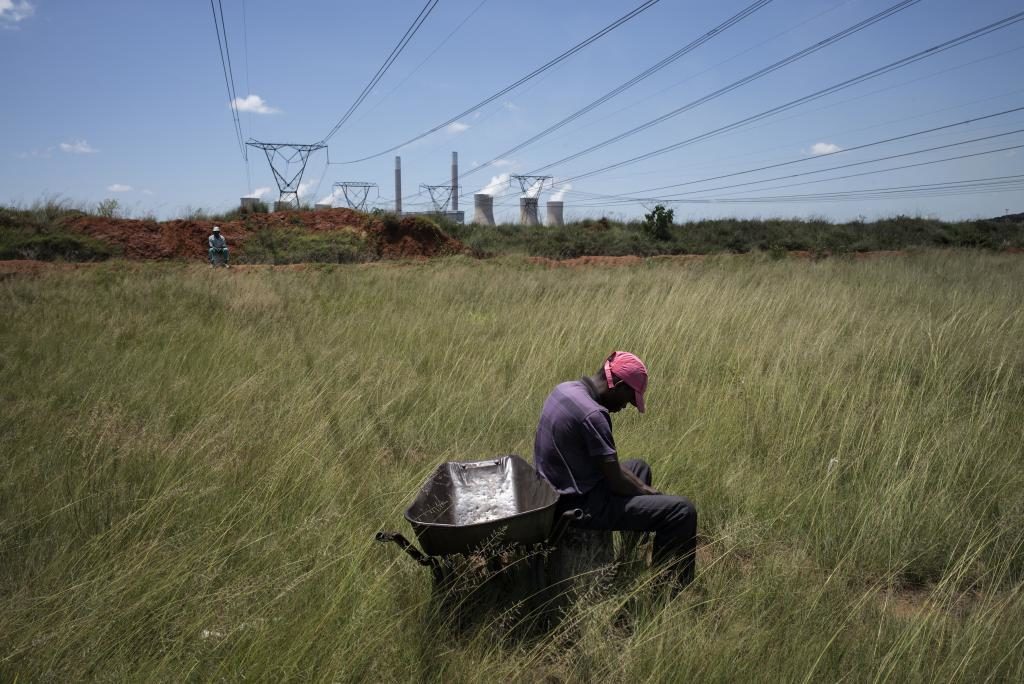 Dolo folds black plastic dustbin bags into puppets whose adventures discourage his primary school audiences from littering. His sets are made from cardboard boxes. He flicks on a light switch and raises the curtain on his seven-minute show, earning no more than “lunch money,” he says, each time he performs.

But the show has been his ticket to exposure to city officials and to opportunities beyond the impoverished and crime-ridden Cape Flats — a rare thing in a country whose unemployment rate is above 25 percent, the highest of any middle-income country in the world. The youth unemployment rate has been estimated as high as 51 percent — and higher in the townships — leading President Jacob Zuma to propose a youth wage subsidy in 2010 to cover part of employers’ hiring costs in a campaign to create 5 million new jobs by 2015.

The move that was greeted with broad enthusiasm but has yet to be implemented due to resistance from the labor unions, headed by the Congress of South African Trade Unions (Cosatu). This deadlock leaves labor unions open to charges that they are hindering job creation, preventing young people like Dolo from joining the formal economy. The unions say it’s more complicated than that.

A powerful force in the anti-apartheid movement, Cosatu claims the youth wage subsidy will be ineffective in reducing overall unemployment because businesses will simply use it to replace older employees with young ones. By any measure, but especially in this country with a history of street protest and a trend of violent crime, the issue of unemployment is a social time bomb. Yet the tripartite alliance government, made up of the African National Congress (ANC), the Communist Party and Cosatu, stands accused of delivering empty promises.

“Cosatu, which played such a pivotal role in creating South Africa’s democracy, runs the risk of being left behind if it remains stuck in the 1950s British model of hostile central bargaining between ‘bosses and workers,’” said Helen Zille, Western Cape Premier and head of the opposition party Democratic Alliance, on Wednesday.

“Tragically, Cosatu is working against the interests of the unemployed, keeping them permanently locked out, and stalling the effort to bring jobs, redress and reconciliation to our society.”

At the same time, thousands of positions remain vacant, for lack of suitably skilled workers. Eighteen years after the country’s first all-race elections, the country has failed to rectify the apartheid-engineered system of under-educating the black majority to prevent it from entering trades and professions previously reserved for whites.

Stepping into the void are organizations like iThemba Labantu, a township skills training center supported by German Lutheran charities. Dolo occupies a room on the grounds of the center in exchange for running a youth drama group.

“School does not prepare us for work or for starting a business,” Dolo said. “Apart from an education you need skills, like how to communicate. Drama is good for that.”

The young puppeteer has never been formally employed and knows only a handful of people in ”proper” jobs with weekly or monthly wage slips. Those formal jobs — warehouse packers, supermarket tellers, airport or council employees — are located outside Crossroads. Within the township, employment is largelyinformal, entrepreneur-based and small-scale. ”We have to make our jobs,” said Dolo, who has written poetry and performed music since his early teens.

”There is a poster of Nelson Mandela in which he holds his palms open,” Dolo added. “He is saying ‘the power is in our hands.’ The government cannot create jobs for us.”

Eighteen years after the South Africa’s first all-race elections, the country has yet to come of age as a nation that knows where it stands in the tug-of-war between the need for welfare and free-market forces. Black Economic Empowerment policies have failed to create a new class of black employers and those who have emerged have inherited a culture of worker exploitation, critics say. At the same time, the trade union membership base has shrunk as the manufacturing industry has fallen victim to competition from the East. In the absence of a skilled workforce, South Africa does not have the option to target niche or high-end markets.

‘The conundrum of an acute skills shortage alongside mass unemployment is the most critical issue facing this country,” said celebrated author and commentator Allister Sparks. “Our dysfunctional schools and poor vocational training are not producing the workers the economy needs. This stunts our growth and, in turn, increases unemployment.”

Young people’s attitudes to manual work — even the skilled kind — tend to be negative because of the degrading ”hoers and tillers” image their parents acquired under apartheid. As a result, many poor youngsters see university studies as the only means of escaping the township. South Africa turns out high numbers of humanities graduates. But the country continues to grapple with creating opportunties for them after they finish school.

High school graduate Godfree Dlamini, aged 20, has just started a six-month vehicle mechanic’s course at iThemba Labantu. However, he is not sure what he will do next and, as is common for many young South Africans, is ill-informed about his options. ”The course is free and we get a 20 rand ($2.50) allowance each day. Doing this is more satisfying than packing grapes in a vineyard which is what I was doing before. But this course is short. A full mechanic’s training costs 15,000 rand ($2,000) and I would not qualify for a bursary because my mum works. If I apply for a student loan I will be burdened with debt for years,” he said.

Age 31 and the mother of a nine-year-old daughter, Thabisa Siyokwana has made a very focused choice to enroll in iThemba Labantu’s new four-month course to train solar panel installers. After high school she worked at a supermarket delicatessen counter, then in a commercial laundry that went into liquidation in 2010. ”I came here to do the computer course,” she said, ”but when I heard you could become a solar panel technician it seemed a new and exciting specialism. When I finish I will still need to find a job but at least I will be in a growth industry. I am the only woman on the course and that might help my prospects.

Siyokwana said there is disconnect between the education system and the job market.

”Young people are not given any advice,” she said. “When you go for jobs they want you to have completed Grade 12, even to pack boxes at KFC. But Grade 8 is enough for that job. People should be given training opportunities while they are still at school.”

In 2010, when the government feared massive layoffs in the construction industry after the building frenzy around the FIFA World Cup, President Zuma launched an infrastructure program over three years worth 840 billion rand ($111 billion). But most of these jobs are materializing through the ongoing ”expanded public works program” — essentially a work-for-benefit scheme for the unskilled, offering jobs such as operating the stop/go sign during highway maintenance or preventing livestock from crossing the road.

”Those are not real jobs. Real jobs will only come once employment laws are relaxed. There is too much red tape in South Africa,” said Peter Kratz, the 48-year-old director of Fundi, charity formerly known as Men On The Side Of The Road.

”Fundi means, ‘someone who knows’ in Swahili. We changed our name because we started to have women members, chiefly domestic workers. Essentially we exist to pair employers with casual workers and to remove people from the precarious situation of being recruited at a traffic light and not knowing whether they will be paid — or how much at the end of the day. Casual work and contracting out are a reality of the world we live in,” Kratz added. “Trade unions are hostile to us because they want to regulate all employment contracts. People pay 25 rand ($3.20) to register with us and we do not negotiate rates of pay. If someone is offering 100 rand ($12.85) for a day’s work and someone living in a shack wants to work for that amount, there is nothing wrong with that.”

South African employers, as well as the Democratic Alliance (DA), echo Kratz’s view. In an April 26 speech in Cape Town at the launch of an industry-driven ”economic development partnership,” DA leader Zille said ”Cosatu is the main roadblock on the road to job creation and redress for millions of South Africans.” She claimed that in order to flex its muscles within the broad ideological church of the tripartite alliance, Cosatu had opted to enforce collective bargaining on start-up companies and block labor market reforms such as the youth wage subsidy.

Cosatu spokesman Patrick Craven rejected the accusations. He said Cosatu belonged as a ”component part” in government, as a result of having been born in 1985 during the struggle against apartheid. He claimed ideological differences within the ANC were more of an issue than Cosatu’s influence on the ruling party.

Craven argued the DA’s position came from a tradition of ”extreme exploitation” to which employers wished to return. ”South Africa’s labor laws are modeled on those of Ireland and the Netherlands and the Organisation for Economic Co-operation & Development (OECD) says there is nothing wrong with them. Ours is the most unequal society in the world and we have to keep that in clear focus.”

He said South Africa needs to move away from the colonial African blueprint of being an exporter of raw materials. ”We have gold, diamonds and food and there must be a stronger emphasis on transformation of those products in South Africa. Our skills shortage has to be addressed through the education system and there needs to be much more focus on vocational training. Clearly there has been neglect and policy implementation has been lacking.”

This month, puppeteer Xolisile Dolo is off to Norway for a one-year attachment with a drama company. But that has been made possible by foreign charitable funding. Similarly the South African government has not played a hand in Godfree Dlamini’s introduction to the workings of cars or Thabisa Siyokwana’s training in installing solar panels. It is therefore unlikely, in a year’s time, that they will all have permanent employment.

Most South African youngsters clearly have not read Mandela’s open palms the same way as Dolo has — a push to go it alone. The young man who created a show from cardboard boxes and dustbin liners admits as much: ”Most young people I know are just sitting at home. They just do not know where to look. It takes a lot to make a job.”