Chapter 1: Out of Syria 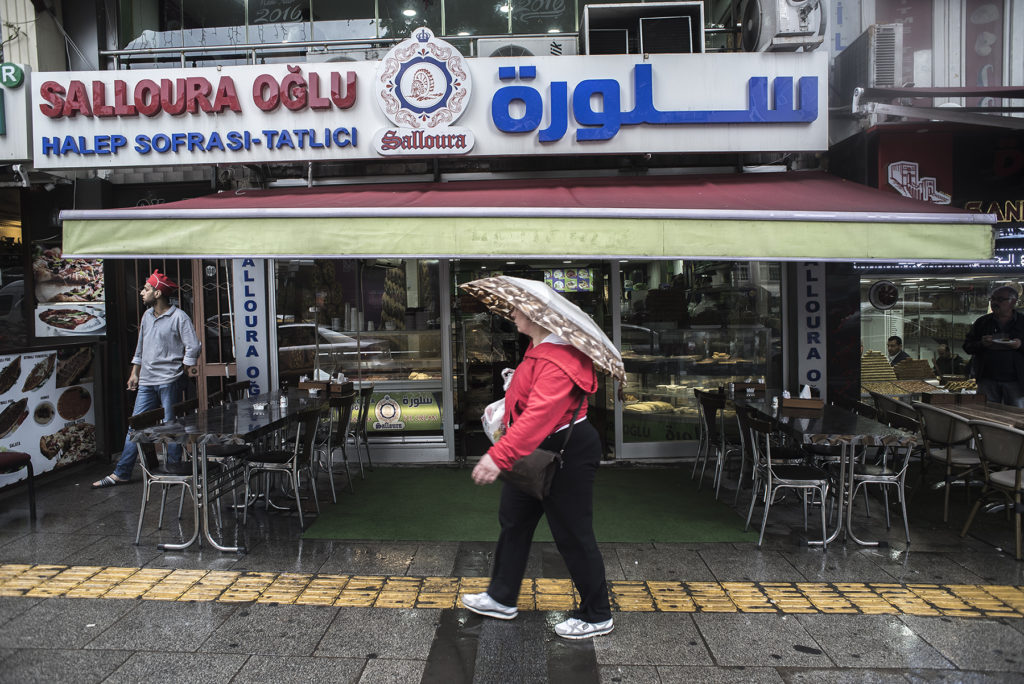 Salloura is a 150-year-old dessert institution that uprooted to Istanbul from the embattled Syrian city of Aleppo in 2014. (Photo by Joris van Gennip/GroundTruth)

When we enter the store, Istanbul temporarily fades away and Damascus or Aleppo take its place. “All real,” the clerk declares proudly, as he shows off his goods. “Smuggled from Syria.” The shop is not Aksaray’s lone seller of Syrian culinary goods. Over the last few years, as the violent conflict in Syria has driven millions of Syrians across the border into Turkey, the neighborhood has turned into the city’s “Little Syria.”

Throughout the mostly working-class district – some 750 miles from Syria – there are now signs advertising “Syrian shwarma” and “Aleppo cuisine,” spelled out in Turkish and also in the curly, coiled letters of Arabic. Syrian street vendors selling cardamom-spiced coffee and jars of pickled vegetables crowd the sidewalks. Restaurants serving displaced Syrians familiar dishes like fatteh, fried pieces of pita topped with slow-cooked chickpeas and doused in garlic-yogurt-tahini sauce, and muhammara, a spicy spread of roasted red pepper and walnut sweetened with a drizzle of pomegranate syrup, now dominate the main boulevard.

Among these new arrivals, one eatery stands out: Salloura, a 150-year-old dessert institution that uprooted to Istanbul from the embattled Syrian city of Aleppo in 2014. The Salloura family, the store’s namesake, has passed down recipes for its specialty sweet cheese desserts since the 1870s. Back then, the Sallouras’ great-great-grandfather roamed the streets of Hama balancing a tray filled with fluffy cheesy pancakes on his head. He’d holler, “Sweet cheese!”, and customers would flock to him.

Over the next century and a half, the Sallouras scattered throughout Syria, and where they went, their confections went too. They opened up shops and added more sweets to their repertoire. In Aleppo, Syria’s culinary capital, the Salloura name became synonymous with “dessert.” Over the course of its existence, the family business successfully navigated its way through the vagaries of the Ottoman and French colonial administrations and they prospered despite the hardships of the authoritarian government of Hafez al-Assad, father of the country’s current ruler, Bashar al-Assad, only giving up on its Syrian home when the violence of the last few years became too much to bear.

Now headquartered in Istanbul’s Little Syria, crowds of people occupy the tables sprawled on the sidewalk outside Salloura’s storefront. Turks and others have come to know the restaurant – which, along with desserts, also serves savory dishes – as Sallouraoğlu, with the added Turkish suffix that means “son of,” as a symbol of the shop’s new home and lease on life. A steady stream of customers pour inside, announcing their orders for the shop’s gooey globs of pistachio, strawberry or sweet cream (ishta) ice cream. Mohammed Al Rashed – he goes by Rashed for short – mans the freezer at the front, just like he did in Aleppo.

“As soon as I step into the restaurant I forget that I’m not in Syria,” Rashed said. Over the course of a few hours, he scoops clean the tubs of ice cream he carefully prepared.

As Syria’s political and humanitarian crisis has forced millions to flee with few of their possessions – some clothes, perhaps some photos – exiled Syrians have instead brought with them a different kind of currency: their culture, language and food. And at Salloura, that currency is gold.

Hussam, a lone diner sitting outside Salloura, scoops up spoonfuls of safarjaliyya, an Aleppan lamb and quince stew, named after the Arabic word for the fruit. “It tastes like home,” the blonde, blue-eyed Aleppo native said with a sad smile. “As soon as I saw there was a Salloura in Istanbul I came right away…We used to always get dessert from them in Aleppo.”

Syrians today scattered across the world remember the days when their biggest worry was making sure they placed an order for the shop’s famous fluffy, sweet cheese rolls – halawat al jibn – in time for dinner. A mention of Salloura often elicits a mix of unbridled patriotism and woeful nostalgia.

“You are bringing me back to my home,” said 22-year-old Hany Al Moulia, a newly resettled refugee in Canada, upon seeing pictures over WhatsApp of Salloura’s new Istanbul location. “Like a fire, it burns me and hurts me to look at it.”

But those simpler days have been replaced with Syria’s fractured and brutal conflict, and even dessert has become a victim of war.

“It was a crisis: there was no gas, and sugar, flour and other items became extremely expensive,” Ahmed Sheikho, one of Salloura’s most trusted employees, recalled. They’d make do by baking desserts in a wood-burning oven, instead of an easier to manage gas oven with which they were accustomed to working. Ahmed, who came to Istanbul in late 2013, spent his last days in Aleppo managing the store after As’ad Salloura, his boss and the sweet shop’s portly patriarch, fled the war-ravaged city in the summer of 2012.

Eventually it became too dangerous to keep sending people to work. “If something happened to [one of my employees] on his way to or from work, like if a sniper strikes him for example, I bear the responsibility,” said As’ad Salloura. “I could not bear this responsibility.”

Over the course of late 2013 and 2014, As’ad paid to smuggle Ahmed, his wife and three kids and about 50 other Salloura employees to Istanbul, where he decided to open up shop.

Within months of opening its doors in 2014, Salloura became a neighborhood sensation. Customers practically gush through its front doors, seeking their sugary fix. The sweet cream rolls are made of springy cheesy pancakes stuffed with sweet cream and cheese, rolled into what look like fluffy white cigars then drizzled in rosewater syrup with a crush of pistachios on top.

We first met Rashed and Ahmed late last spring, during this period of Salloura’s growing popularity in Istanbul. By the summer, Salloura had added a factory where As’ad kept watch over the sweets production, and they opened several new shops in Istanbul in the fall. Each time we visited, they’d insist on stuffing us with hummus and stews, ice cream and cream rolls, transporting us back to their homeland with each bite.

And then, just like that, Ahmed and Rashed abruptly disappeared and suddenly reappeared – only now they were thousands of miles away in Germany.

A journey that already had countless dramatic twists and turns now had even more of them, reminding us that the story of Salloura is beyond a tale of a sweets shop in exile. It is the story of Syrians forced to move further and further from home. With each violent blow of their nation’s history, they’re forced to rebuild in new places what they had before.

Over the next few months we will be chronicling the evolving story of Salloura – the family and its enduring craft of sweets-making and the workers who carry on the family’s trade. Every two weeks we’ll publish a new installment of Salloura’s saga, following the shop and its people as they chase the memory of a time and place that no longer exists. With each piece we’ll offer a key recipe to a dish described in or connected to the story, offering the chance to taste Syria right from your home. With each piece we’ll introduce you to the resilient faces behind the rising numbers and countless headlines.

Chapter Two: Into The Promised Land

This series is produced in collaboration with Culinary Backstreets.