Beyond language: How to enfranchise voters who don’t speak English 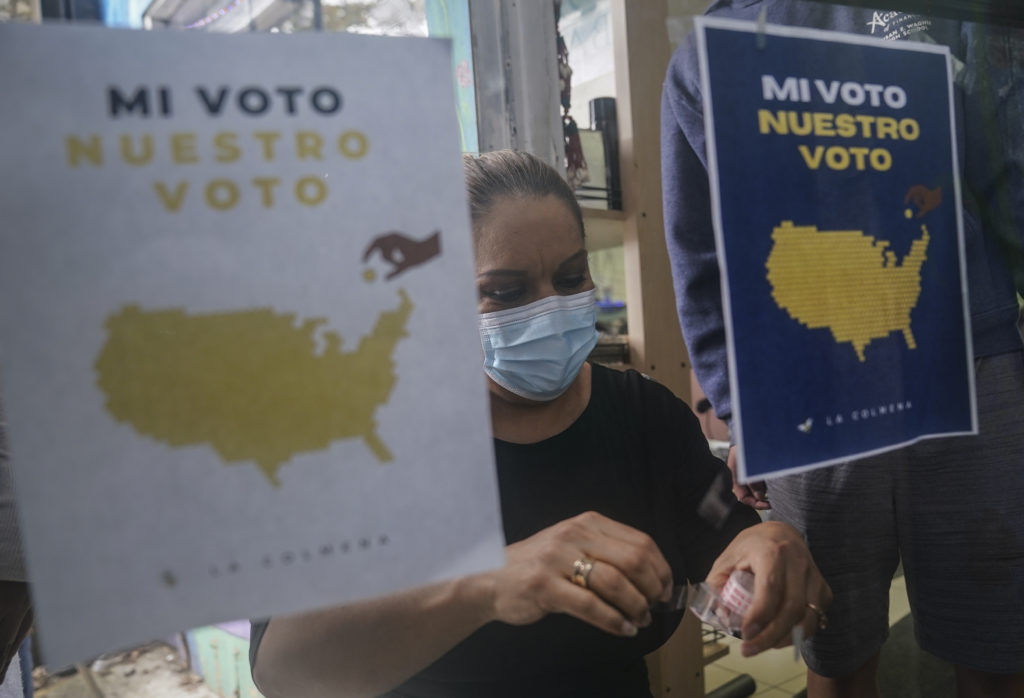 Salon owner Alejandra Moran tapes flyers to a door as part of a campaign to get voters to the polls by La Colmena, a community-based organization working with immigrant workers, in the largely Hispanic community of Port Richmond in Staten Island, N.Y., on Oct. 23, 2020. (Photo by Bebeto Matthews/AP)

Editor’s note: This is the last story in a two-part series about American voters who struggle to participate in elections because of their limited English proficiency. Read the first story here.

One question we’ve yet to answer is whether mail-in voting expanded access for Americans who don’t speak English well enough to vote.

Under normal circumstances, millions of voters with limited English proficiency don’t get the support they need to cast their ballots — enough to change the outcome of past presidential elections, as GroundTruth has reported. The Voting Rights Act requires translation support for such voters, but only for certain languages, and only in certain jurisdictions. Sometimes, voters don’t get the help they need even in places where the federal law requires officials to provide  it.

The 2020 presidential election was far from typical, though.

States scrambled to shift to voting by mail and with fewer polling places amid the pandemic. That fueled a slew of lawsuits, and a disinformation campaign from former President Donald Trump who sought to convince, without evidence, that the election was stolen from him. After the courts in multiple swing states tossed out the lawsuits, Trump doubled down on his “election steal” claims and encouraged his supporters to take their grievances to Washington, D.C. on Jan. 6 when lawmakers gathered to confirm the results of the election, culminating in the insurrection at the U.S. Capitol.

Given the “mayhem” of 2020, access likely didn’t improve for voters with limited English knowledge, said Wendy Quesenbery, executive director of the Center for Civic Design.

“That doesn’t make it right,” said Quesenbery, whose organization uses research, usability, design, accessibility, and plain language to improve the voting experience. “If you don’t have strong ballot access and language support to begin with and you have to make huge changes, … language support’s often the thing that gets left behind.”

Across the country, at least 2.7 million eligible voters don’t receive the language support they need to participate in elections, which is at the heart of American democracy. Some state and county officials are showing the way by prioritizing expanding access for voters who aren’t fluent in English. However varied — and imperfect — their practices might be, they do offer insight into potential solutions. Common themes include transparency, long-term commitment and consistent engagement with communities with the strongest stakes in improving language support for voters.

In Pennsylvania, voters first had the option in November 2019 to cast their ballots by mail without an excuse and the state launched an online portal to apply for a mailed ballot.

Initially, however, the online applications were only in English. Later, a Google-translated Spanish version was made available as a PDF. But that meant Spanish-speaking voters needed a printer as well as stamps and envelopes at home to mail in the application, creating an access gap compared to English-speaking voters who could easily complete the entire process electronically.

Statewide, Pennsylvania isn’t subject to federal language support requirements. The law’s provisions (Section 203 of the Voting Rights Act) are triggered when at least 5 percent of the eligible voters — or 10,000 whichever is less — have limited English proficiency in a single language group.

But in three jurisdictions — Philadelphia and Berks and Lehigh counties — the Spanish-speaking population does meet that threshold.

Advocates became aware of the issue and considered taking the state to court. But, ultimately, they refrained, in part, due to the pandemic, according to Will Gonzalez, who heads Philadelphia-based Latinx advocacy group CEIBA.

“At that point, in the middle of a public health emergency, we didn’t think that it was the wisest thing,” he said. “We went with trying to work things out.”

Ultimately, Pennsylvania officials launched the Spanish ballot portal and blamed the delay on running out of contractor hours to finish the job initially and limited bandwidth due to the pandemic.

Pennsylvania’s Department of State officials have declined to provide the total number of ballots requested by voters through the portal, limiting its data release to total returns and ballot requests made too late. Officials have until March 18 to provide the information or reject a remaining active request through the state’s Right-to-Know law.

The behind-the-scenes negotiation that yielded results in Pennsylvania doesn’t always work. When that fails and the courts get involved, the outcome often isn’t what one might imagine.

As the language support issue was playing out in Pennsylvania, election officials in Georgia sent out ballots only in English for the primary — even to voters in Gwinnett County who are entitled (under Section 203) to get Spanish-translated election materials.

Voter language support lawsuits are tough to win, experts say, partly because the law itself is vague, as are the consent decrees and other agreements that stem from enforcement efforts.

Meanwhile, some federal lawmakers backed the John Lewis Voting Rights Advancement Act to at least prevent reduced ballot access for racial and language minority groups. But so far, the proposed legislation languished in the U.S. Senate during 2020 and hasn’t been reintroduced yet.

The measure proposed re-establishing federal oversight that had been in place in certain states with a history of discriminatory voting practices according to a formula in the Voting Rights Act since its enactment in 1965. In 2013, the Supreme Court overturned those federal oversight provisions and told Congress to create a new way to determine which states would need federal approval before changing their voting laws.

The bill also called for federal preclearance in jurisdictions where racial and/or language minority groups reach certain population thresholds — not only for changes to voting laws, but also to Congressional districts and voting locations. And it called for federal pre-approval before any jurisdiction, demographics notwithstanding, can scale back on multilingual ballot and other election materials.

Still, political scientist Dan McCool predicted last fall that forthcoming reform attempts wouldn’t happen in Congress, but instead focus on statehouses — the least “politically problematic” venue, given GOP control of the Senate at that time and Trump’s 180-plus judicial appointments.

But that was before Georgia’s Senate runoffs. Now that the Democrats control both Congressional chambers, prospects for voting reforms have changed.

“In the past, updates to the Voting Rights Act always had bipartisan support,” says McCool, a professor at the University of Utah. “ They have not for the past four years.”

That past bipartisan support for VRA reauthorizations, however, hasn’t resulted in expanded support for voters with limited English proficiency, as Type Investigations reported last fall.

While the latest proposal aimed to prevent states from reducing ballot access, it didn’t attempt to specify what counts as adequate support for such voters.

The related HR 1 (For the People Act) re-introduced last month calls for making federal grants available for pilot programs and poll worker training with the goal of improving voting processes and access, including for translation and other language support.

‘It’s not just about language’

Money also might be used to motivate officials to be more transparent about how officials support voters with limited English language proficiency, McCool says, perhaps by tying election-related funding to jurisdictions issuing reports detailing those efforts.

Orange County, Calif., widely regarded as a gold standard for multilingual voter engagement, produces one every other year.

Voter registration databases and other systems such as equipment (voting machines, scanners, tabulators, etc.) all need to be compatible, for example. Given certification, bidding and contract public notice, deadline and other requirements, jurisdictions must plan ahead for fully integrated translation support – though multilingual ballots get easier to program all the time, Kelley said.

Research focused on quantifying ballot readability has shown translations are more accurate when native speakers are engaged in the process. There are several full-time language specialists at the Orange County elections division.

The Center for Civic Design’s Quesenbery says governments could consider bilingual staff — existing workforce, prioritizing multilingual new hires or both — who might not be fully dedicated to translation support, but could handle emergency announcements and last-minute changes, if necessary. That would eliminate the days-long (at minimum) delays entailed in sending out materials to a contractor, she said.

States also could do more to offer translation templates for ballot language that’s consistent statewide instead of leaving counties out on their own, as is often the case now, Quesenbery said. She pointed to Pennsylvania as an exception for expanding translated election materials available to any of the state’s 67 counties last year.

Then there’s automated translation. It’s been widely panned — particularly for legal scenarios like voting (and complex subject matter such as ballot reform, in particular). But it shouldn’t be discounted altogether, Quesenbery says.

“It might not be the long-term answer, but it is a short-term fix if you’re in the process of developing a strong language access program,” Quesenbery said.

Ivan Garcia, who heads Make the Road PA, says Google Translate and similar approaches are better than nothing.

“Most of the time, if you have no resources … with Google Translate, most voters will get the gist of what you’re trying to say. People will more or less understand,” he said.

Garcia’s concern is that officials would stop there and neglect to progress to more involved language support.

In Orange County, Kelley gets inquiries from election officials elsewhere seeking advice, in particular on how to find the money. All told, it costs between $7.40 and $9.50 per voter who needs language support, he said.

His advice, generally, is to start with ballots, voter education documents and other written materials, and build from there.

“Baseline is getting translations correct in all of your [ballot] materials, so focus strictly on that first, then start building your website and bilingual support in the field,” Kelley said, noting about 30 percent of his election workers are bilingual who speak the native language of voters needing language support in their assigned precincts.

But political will is key, even in places like in Orange County, to maintaining relatively robust infrastructure already in place and adjusting and expanding it when warranted.

For example: the county assigns bilingual election workers based on registration and census data. But that formula didn’t work as well after pandemic-driven polling place consolidation in favor of a lower number of voting centers open Oct 30 through Election Day.

So, the county offered language support by video conference with native speakers via secure tablets at in-person voting centers. That will be a permanent part of the county’s election setup going forward, Kelley said.

Kelley and other officials were not required to do that. It was a matter of community values, government priorities, political will.

That is a far cry from the situation in Pennsylvania’s Berks County where officials rejected community groups’ offers to send out Spanish text alerts on the county’s behalf before the election, Garcia says, and help with interpretation at the polls Nov. 3.

Ultimately, it seems to boil down to officials’ commitment to increasing voting access for people by meeting their needs, translation and otherwise.