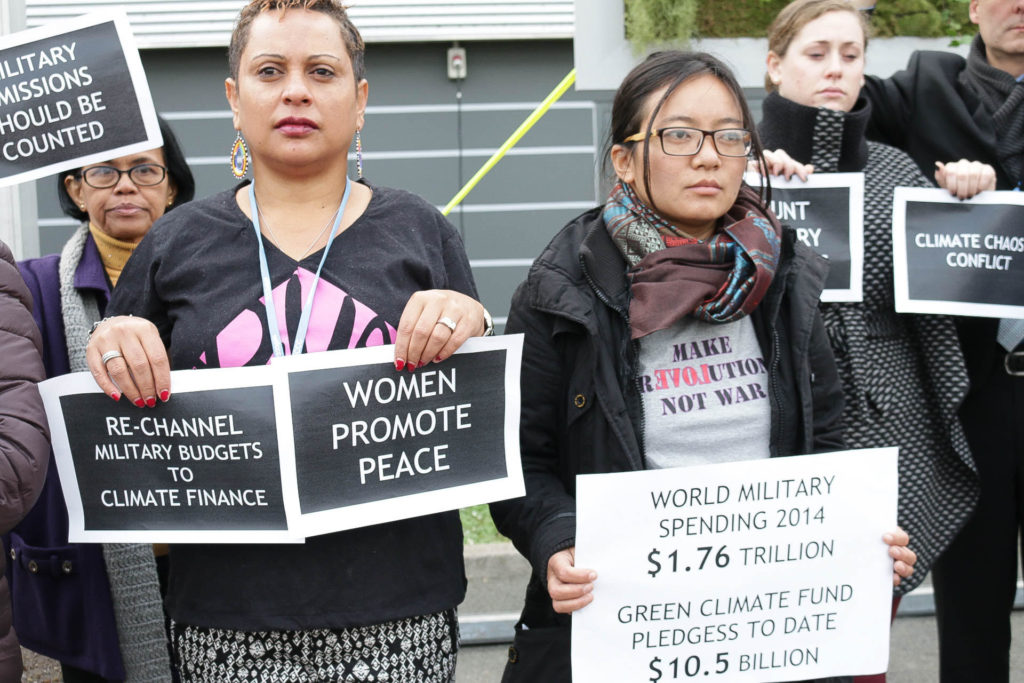 LE BOURGET, Paris — The idea that climate change is intensifying conflict around the world is increasingly being accepted by global leaders. As weather events become more extreme, there is growing recognition that food scarcity, hot temperatures, and massive droughts and floods are exacerbating existing fractures and fueling civil unrest. Less talked about, however, is how—by extension—climate change is making women and girls more vulnerable to abuse, exploitation and trafficking.

“Women are very much impacted by every kind of conflict. Women are the ones that bear the most consequences,” said Camille Risler, 25, a program associate with the Asia Pacific Forum on Women, Law and Development, a network of feminist groups that recently turned to studying the effects of climate change on women. “There is an increase of sexual violence attacks against them. They are displaced, they are relocated in centers where they don’t have facilities to raise their children or take care of their health.”

Inside the restricted blue zone of the conference center, where formal negotiations are taking place among the delegates from more than 190 countries, Risler gathered Friday with nearly two dozen gender advocates to protest military activity, calling attention to unchecked military emissions and the link between climate change, conflict and women’s wellbeing.

They pointed to a recent report by Asia Pacific Forum that examined how climate change and natural disasters impact women, peace and security, documenting instances of young women being raped and recruited into combat because of regional conflict, and trafficked out of resettlement camps after natural disasters. After Typhoon Haiyan devastated the Philippines in November 2013, for instance, the United Nations Population Fund estimated that 5,000 women were subjected to sexual violence in alone in December.

The advocates emphasized their opposition to war, and to the practice of prioritizing national security over the dangers of climate change. They also criticized climate negotiators for failing to include military emissions when measuring countries’ domestic carbon output, a move pushed for by the United States. The US military is the world’s largest institutional consumer of oil, using more than 100 billion barrels of oil a year according to the Union of Concerned Scientists. Failing to include these numbers when measuring emissions, advocates contended, masks the military’s contribution to global warming and makes it impossible for nations to reach the goal of preventing the globe from warming above 1.5 or 2 degrees Celsius.

“First, it means that the counting of emissions are wrong, and second, it’s totally unfair,” Risler said.

Protesters called for military budgets to be redirected to climate finance instead.  Global military spending was $1.7 trillion last year, compared to $10 billion in global commitments made for the Green Climate Fund, the UN-created fund to help developing countries stave off the effects of climate change.

The group was also disappointed by the latest draft agreement released yesterday, partly because of the exclusion of human rights and gender equality from the operative part of the text.

“I’m not very hopeful with what world leaders are gathered here to do. On one hand they try to do something good, but on the other hand they are doing something sneaky like omission of military emissions,” said Alina Saba, 28, an indigenous rights’ activist from Nepal and Thailand. But, she said, “I’m hopeful in the people’s movement on the ground.”

The demonstration began and closed with silent vigils to remember lives lost from conflict and climate change. Participants stood together in one solemn line, some with closed eyes and others with signs that read, “Women oppose war” and “Women promote peace.”