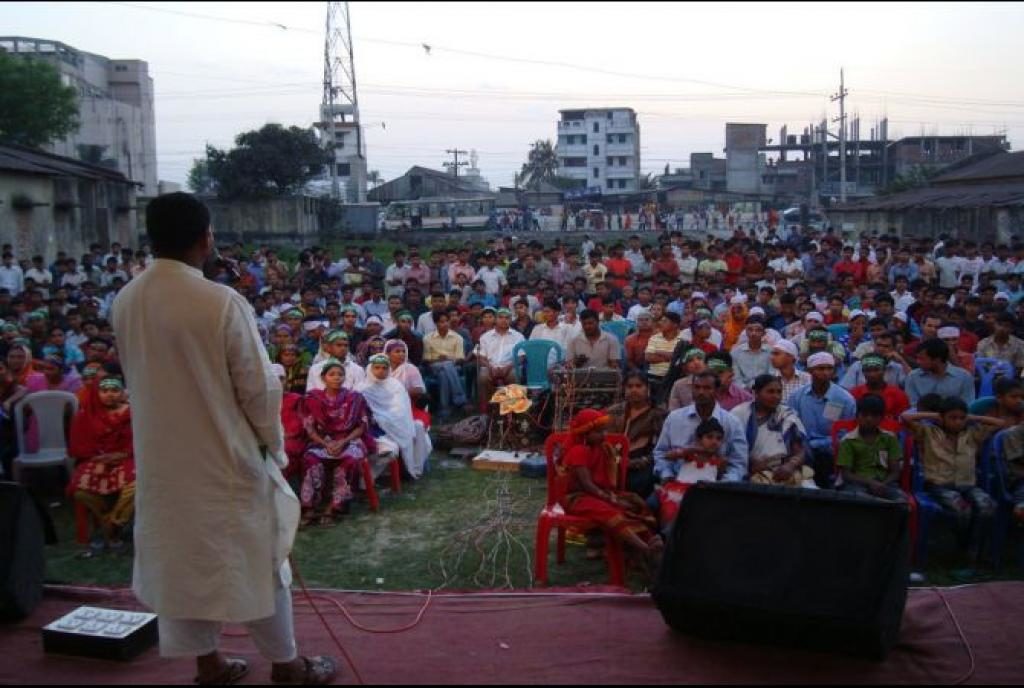 ASHULIA, Bangladesh — On Dhaka’s northwestern edge, the suburb of Ashulia is a favorite getaway for those seeking an after-hours escape from the fastest growing city in the world.

Street lights are nonexistent, and the late-night trip from the city snakes north along a narrow lane toward paddy fields immersed in complete darkness. But tread just a little further beyond the darkness, there is a glow of fluorescent lights so bright it seems like daylight, accompanied by the industrial hum of heavy machinery.

These are the garment factories of Savar and Gazipur — an engine of the nation’s economic growth, both a boon to and the bane of existence for a desperate, disposable workforce of 3.6 million people toiling inside into the night. These plants embody what economists call an international “race to the bottom” in terms of wages, benefits and job security. And these workers are indeed on the very bottom by just about every measure, according to economists, labor activists and the workers themselves.

A partially charred factory where a raging fire killed 29 people in December 2010 is still making garments for Tommy Hilfiger and other major American brands here in Ashulia. The fire failed to spark international attention to continuing labor rights violations in the country until a television report pushed Hilfiger parent company PVH to pledge more than $1 million to fire safety. But labor activists here say it’s part of a public relations dance and the recent murder of a prominent activist serves as a reminder that those who dare to push for better labor standards can face dangerous, sometimes lethal opposition.

This message was allegedly sent out loud and clear on April 5, when the brutally mutilated body of Aminul Islam was discovered dumped by a roadside.

Islam was one of few labor leaders in an industry where a fraction of 1 percent of the workforce is represented by a trade union — labor activists estimate that just 10 to 15 of Bangladesh’s 5,000 garment factories have active unions. Before he disappeared, Islam had been registering the complaints of workers here at Shanta Group, which produces clothing for Hilfiger, Nike and Ralph Lauren.

His death sent a chill through the ranks of labor rights advocates who operate here in Ashulia, including Babul Akhter of the Bangladesh Center for Worker Solidarity, who suspects Bangladeshi government security forces of killing Islam, who had been arrested and tortured before in connection with his work.

“No one wants to join unions out of fear,” said Khorshed Alam, the executive director for Alternative Movements for Resources and Freedom, a labor rights organization.. “The local owners, the brands, the government, their positions are all the same on this. They know that if the workers get organized, they will have to start listening to them.”

The garment manufacturing sector wields enormous influence here. Last year, the industry accounted for almost 80 percent of the country’s exports according to data from the Bangladesh Garment Manufacturers and Exports Association (BGMEA).

Finding that competing countries like China, India, and Vietnam are now too expensive, foreign brands are flocking to Dhaka to take advantage of the lowest wages in the world — less than half of the new minimum wage expected to be implemented in Cambodia, its closest competitor in terms of cheap labor. The typical Chinese wage minimum wage is now four to five times that of Bangladesh.

“Bangladesh,” said industry veteran Zia Ahad, “is the cheapest place under the sun.”

And according to labor activists, local factory owners, international retailers and the country’s government want to keep it that way — often with great success.

“In our experience these sorts of issues will continue to arise, as long as brands in the US and in Europe are able to go around the world and do business on the basis of a race to the bottom,” said Barbara Briggs, the assistant director of the Pittsburgh-based Institute for Global Labour and Human Rights. “Over and over again we see companies have made lovely codes of conducts, but are workers’ rights being respected? No.”

One in every three shirts sold in the US belongs to PVH (formerly Phillips-Van Heusen), whose brands include Calvin Klein, Kenneth Cole, Nautica, Timberland, and Tommy Hilfiger. Bangladesh is their biggest sourcing destination, according to PVH representatives working in the country.

On December 14, 2010, a fire broke out on the 11th floor of the factory in Ashulia, owned by Hamim Group and producing clothing for PVH. Twenty-nine people died and hundreds were injured, mostly from the panicked stampede that ensued as news of the fire spread.

Allegations emerged that the fire was caused by faulty electrical wiring. Labor activists suspect management may have locked exits to protect imported fabric from being stolen.  But the complex nature of supply chains for major US brands provides for a very plausible level of deniability for people like Hilfiger, removed by several layers from the floor managers allegedly locking the exits in factories on the other side of the world.

This allows their operations to skirt international labor laws abroad while incurring few penalties at home, labor activists say. When brands are caught doing something wrong, they can point to their corporate social responsibility (CSR) divisions and claim a lack of knowledge of what their suppliers are up to, playing a game of ‘see no evil, hear no evil.’

Factory fires in Bangladesh are common. In March 2010, a fire at Garib & Garib Sweater Factory in Gazipur killed 21 workers.

Alam’s organization estimates that over 300 workers have been killed in work-related incidents since 2005 from all causes. The BGMEA says that ‘only’ 270 people have died in factory fires in the past 30 years.

Shefali Akhter, 25, survived one fire after a floor near the top of her factory was set ablaze, again from sparks due to poor wiring.

“Oh I was very scared,” she recalled, “if you see fire like that everyone gets scared. It felt so strange, I thought ‘I’m going to die’ and I just ran, I lost my senses. Everyone was just saying ‘quickly get out, there’s a fire, there’s a fire.’”

She remembers seeing four or five people fall down and hurt their heads in the dash down the stairs.

“We are poor people, we come here to provide our services. The owners should at least protect our lives,” she said.

Garment laborers in Bangladesh like 32-year-old Rabia Begum, who goes by the name Lovely, earn far less than $2 a day, the global poverty threshold. After two decades in the industry, Begum is paid Tk 4,200, or roughly $50 a month.

Begum makes an effort to stay composed but can’t.

“I’m sorry if I’m making you feel bad,” she said, and she begins to quietly cry.

“That was one life,” she continued after a while. “Now this is another life. But it’s ok, I’m doing fine.”

Except she isn’t. Workers rioted violently in 2010 for an increase in the minimum wage, which had been languishing at the equivalent of $20 a month for many years. Owners finally caved and raised it to $40 per month, but this was less than half the pay rise workers were demanding. Living costs in Bangladesh are cheap, but they’re not that cheap.

“Since they raised the minimum wage, our rent has gone up twice,” Begum said. “Price of rice has gone up, lentils, potatoes have almost doubled in price.”

Lovely, who works for Vision Group, says her employers treat her well, but this doesn’t save her from the endemic overtime plaguing the industry.

Even when given the choice to not work overtime, most workers are forced to because they cannot afford to survive otherwise.

“Is $40 a month enough?” asked Nur Mohammed Amin Rasel, a senior deputy director at BGMEA, the trade body representing garment manufacturers. “Well, are you talking as a garment worker, or as a Bangladeshi? When you get the job as a garment worker it seems like it’s not enough. But go ask a rickshaw-puller or a welder what they think about $40 a month.”

“But yes, on humanity grounds, no of course it’s not enough. You can’t live on that,” he added.

The garment manufacturing sector has been a trailblazer for industrialization in the developing country, which for the time being is still a primarily agrarian economy.

In fact, Rasel noted, China recently asked Bangladesh’s labor minister to send over 80,000 workers to plug the shortage of unskilled labor in its factories.

The problem is that Dhaka’s appeal as a sourcing destination for major brands relies almost entirely on its availability of cheap labor.

“In real terms, cost of garments has gone down 60 percent in Bangladesh since World War II,” noted Ahad, who has worked for Gap and Reebok. “How can you justify depressing living standards of workers to keep an inefficient industry afloat? Right now, low wages are subsidizing the industry.”

The trouble, Ahad said, is a failure of both buyers and suppliers to connect corporate social responsibility (CSR) with profits.

“If you go and ask any of them why they talk about CSR, for the most part they will not be able to give you a straight answer,” he said. “Buyers don’t see a business case for compliance. So when they come and make their compliance demands, how do you expect an understanding from suppliers? They see it as an imposition, a kind of fetish on the part of the buyers.”

“These days a code of conduct is almost like a joke,” he concluded.

And yet, said the labor rights advocate Khorshed Alam, it looks unlikely that the garment factories will leave Bangladesh anytime soon.

“Cambodia’s entire workforce is less than the number of people we have working in the garments industry alone,” Alam said, dismissing the possibility. “Where would they go?”