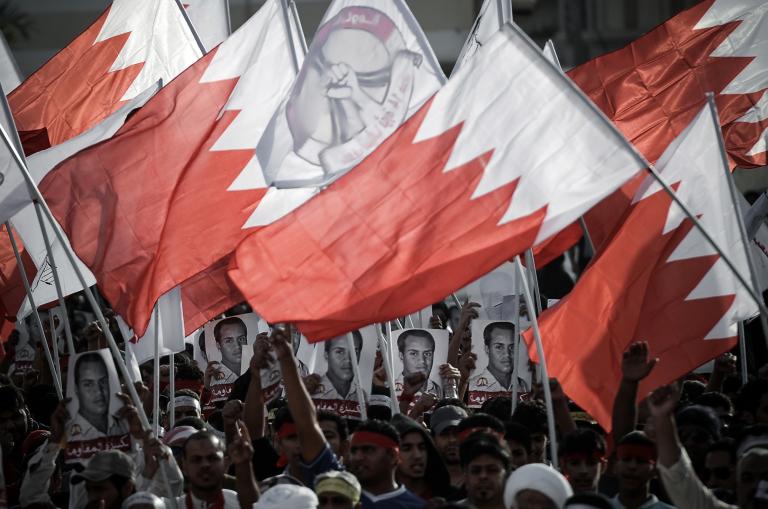 Bahraini protestors wave their national flag during an anti-government rally to demand reforms on March 19, 2013 in the village of Belad al-Qadeem, in a suburb of Manama. Sunni-ruled Shiite-majority Bahrain has seen two years of political unrest linked to opposition demands for a constitutional monarchy that has killed at least 80 people, according to human rights watchdogs. - ((Mohammed al-Shaikh/AFP/Getty Images))

An uprising that began as a challenge to monarchic rule has become a largely sectarian movement by majority Shia Bahrainis against the Sunni leadership. As American scholar on the Persian Gulf region Joseph Kéchichian details — presented in partnership with the USC Annenberg School for Communication and Journalism — Sunni-Shia conflict appears to have entrenched itself in Bahrain under the regime.

Two years after the first skirmishes that led Bahrian’s ruling Al Khalifah family to order the destruction of the old and elegant Pearl Roundabout monument on March 18, 2011, Sunni-Shia tensions continue.

Timid efforts to defuse conflict between Muslim sects have been made though confrontations persist as the underlying causes — discrimination and favoritism — remain intact. Discussions of Islamic unity have fallen on deaf ears with few concrete recommendations under review.

One of the smallest kingdoms in the world, Bahrain boasts a 1.2 million population figure of whom less than 600,000 are indigenous, with the balance hailing from numerous Arab as well as non-Arab countries. Densely populated, though concentrated in the north of the country around the capital city of Manama, an estimated 65-70 percent of the indigenous populations are Shia Muslims even if the ruling family is predominantly Sunni.

The oldest traceable Shia community, known as the Baharnah, track their roots to Arabian tribes that were present in the area since pre-Islamic times. They accepted Islam and became Shias nearly 1300 years ago. In addition to Manama, many live across the causeway on the Island of Muharraq, though exclusive villages exist elsewhere.

Sunni Bahrainis are relatively recent arrivals on the island kingdom, as most came with the Al Khalifahs about 200 years ago from Qatar, where the Al Thanis defeated and expelled them from the promontory. Sunni Arabs, including the ruling family trace their origins to Central Arabia, Najd in particular, which underscores their ideological proximity to the Saudi royal family, though they are not Muwahhidun (Wahhabis).

In addition to the Baharnah and Sunni Bahrainis, another significant and influential ethnic minority arrived nearly 400 years ago as laborers, artisans and merchants, and were known as the Ajam (Persians Shias). Unlike the Baharnah, the Ajam have maintained a distinct culture and language and though most assimilated over the years, identifying themselves as Persian Bahrainis.

Bahrain’s Constitution ensures “freedom of conscience, the inviolability of worship, and the freedom to perform religious rites and hold religious parades and meetings, in accordance with the customs observed in the country.” In reality, however, strict rules have governed how citizens exercised these rights, as Manama practiced subtle discrimination against Shias. Little or no criticisms of the ruling family are tolerated.

Considerable restrictions have also been placed on how many places of worship can be constructed along with myriad personal aggravations against the Shia. The sum total of dormant frustrations boiled over into the 2011-2012 uprising that took on a purely sectarian dimension.

To maintain strict political control, Manama requires that religiously based, political, and nongovernmental organizations register as “societies,” which must function and operate somewhat like parties with some legal rights to conduct political activities. In other words, only such societies were authorized to participate in parliamentary and municipal elections, even if most Shia societies boycotted the last elections, held in 2007.

Even more ominous is the requirement for religious groups to obtain a license from the Ministry of Justice and Islamic Affairs to operate, for example, religious schools or clinics. In fact, holding religious meetings without permits is illegal in Bahrain although such permits have routinely been issued. Moreover, Manama exercisesconsiderable control over the High Council for Islamic Affairs, which reviews and approves all clerical appointments within both the Sunni and Shia communities. The Council vets all candidates who express a desire to join the armed forces even if very few Shia Muslims are recruited to serve in the military and in various domestic security services.

Ministry of Education requirements are equally discriminatory, as they designed the school curricula, which discussed all branches of Islam but emphasized the Maliki school of Sunni theology. Ja‘afari traditions of Shia Islam were rejected in the past even if civil and criminal legal systems were a mixture of the Sharia, strictly respected tribal laws, and other civil codes and regulations.

Personal status concerns, including women’s rights, marriage contracts, inheritance, and legal representations are all governed by Sharia. Interestingly, and in the absence of a direct male heir, a Shia Bahraini woman inherits the totality of bequeathed property, whereas a Sunni woman in similar circumstances inherits only a portion, with the balance divided among brothers, uncles, and male cousins of the deceased.

No restrictions exist on citizens to make pilgrimages to Shia shrines in Iran, Iraq or Syria, even if Manama monitors all travel to Iran and carefully scrutinizes those who pursue religious studies in Iranian Shia seminaries.

Bahrainis were disappointed when their leader Hamad bin Isa Al Khalifa failed to follow up on promises he made in 1999 after he succeeded his father on the throne. Many more wished that he would implement the reforms outlined in the 2001 National Charter that anticipated a return to constitutional rule.

Instead, Al Khalifa family disputes postponed the concrete measures that were voted upon in a popular referendum, something the people could no longer tolerate in the 21st century.

Indeed, the 2011-2012 uprisings and the crackdown that followed essentially meant that the monarch’s uncle, Shaikh Khalifah bin Salman Al Khalifah, the immensely powerful prime minister and the richest man in the kingdom, was not replaced.

To be sure, the monarch elevated his heir apparent, Shaykh Salman bin Hamad, to the deputy premiership, though the appointment was merely cosmetic. Chances that bin Hamad would be allowed to resurrect the 1973 Constitution, which the heir apparently wished to do, remain small.

That 1973 statute allowed free parliamentary elections but was suspended because the ruling family perceived it as pledging too many rights to citizens that, it was worth repeating, were Shia. Moreover, and although Bahrain sustained violent demonstrations in the 2011-2012 uprisings, the ruler commissioned an independent judiciary body to examine the charges of torture and welcomed the November 23, 2011 report drafted by an international team of scholars led by Cherif Bassiouni.

The Bassiouni Commission took 9,000 testimonies, documented 46 deaths, numerous allegations of torture, and a variety of grievances against the monarchy. It also offered a series of recommendations, some of which were implemented by the government. Several Shia mosques, destroyed ostensibly because they were built illegally, were slated for restoration.

The Bassiouni Commission Report notwithstanding, Bahraini authorities held several secret trials where protesters were sentenced to death, while many opposition politicians were arrested. Members of the country’s civil society, especially nurses and doctors who treated injured protesters, were jailed ostensibly because they cared for the wounded that were brought to emergency rooms during the uprisings. Hundreds of Shia professionals were fired from government positions and their pensions were canceled, while students and teachers who took part in the protests were routinely detained.