ON THE GROUND IN SELMA, CA 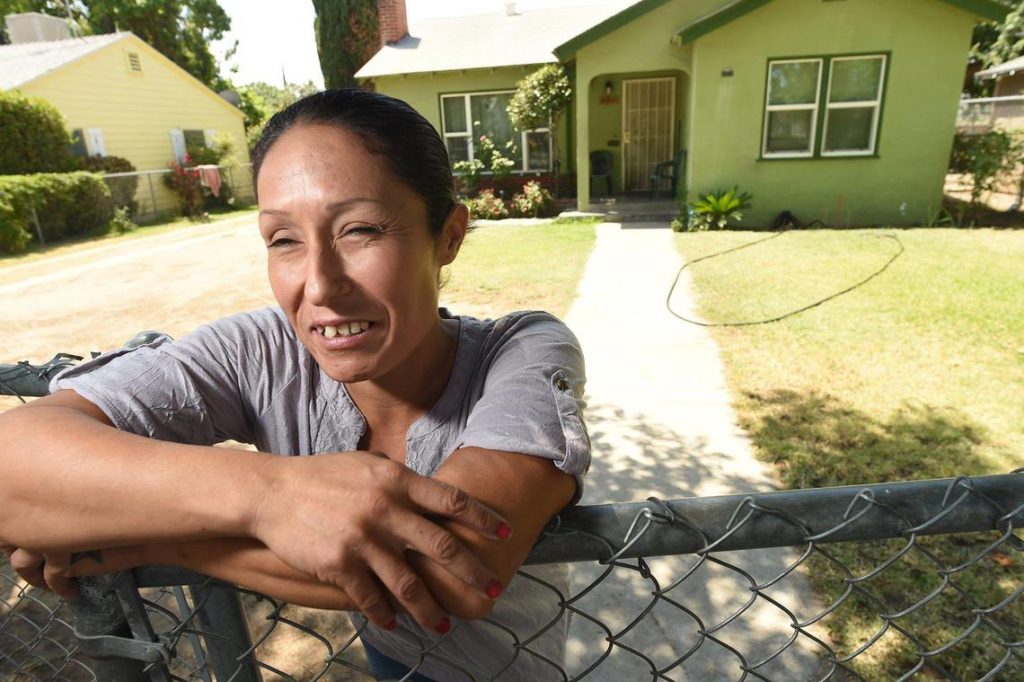 One of the local residents that Report for America's Manuela Tobias has spoken with about dental care needs in Central Valley, Gina Diaz-Nino is reluctant to go out in public because of her teeth – ravaged by years of drug abuse and injury – which she says now harms her ability to get a job, interact with people and gives her low self-esteem. Learn more about her story in the video by the Fresno Bee below. (Photo by John Walker/Fresno Bee)

SELMA, Calif. — At the crossroads of Highway 99 and 43 is Selma, California, a small town nestled between fields of peaches, plums and grapes.

A floral patterned tablecloth was draped over the high table. Family portraits and trinkets were scattered everywhere. In the scorching 100-degree heat of late July, a 57-year-old fruit packer here shared her story with the Fresno Bee, one all too common for those struggling with poverty.

In 2018, she was embarrassed to open her mouth or even, at times, show up to work. The crown on her top teeth, which had fallen out in a childhood accident, was falling apart. Metal peeked through her front tooth, and a hole in her back tooth was making her uncomfortable.

She sought out a dentist who accepted Medi-Cal, the state Medicaid program she’s enrolled in that provides health care coverage to low-income Californians. But her dentist told her what she needed would not be covered by the insurance system, which is historically riddled with problems. He never ran an authorization request.

Instead, he urged her to finance her new crowns by taking out $10,000 in credit, almost a year’s salary in her seasonal work. Without understanding much about the card, Isabel acquiesced because she trusted the dentist as a medical professional.

Only after taking out the loan did she learn she had only one year to pay it all back before 27% back-interest kicked in.

The temporary bridge he made was too big and crumbled off within two weeks. After multiple calls, the credit card company gave her a refund, although her dentist continues to hound her over payments, which is why she asked to remain anonymous.

Of the thousands of people who complained to the federal government about the credit card company in the last five years, 184 people, including 45 Californians, mentioned “dentist” or “dental” in their complaints. There could be hundreds more, however, as a majority did not publish their complaint narratives.

The Health Consumer Alliance, a statewide coalition of legal service offices, says it reviewed and helped consumers on at least 28 dental credit card cases in 2019, and 55 in 2018. Central California Legal Services, based in Fresno, estimates they reviewed 24 cases since 2013.

While it may not sound like a huge number, advocates said the cases were egregious.

Isabel and her neighbor, Dwayne Youngblood, can barely communicate, as she speaks only her native Spanish, and he speaks only English. But he, too, has struggled through dental issues, a commonality that runs steadily if quietly between them.

Plopped in the center of his property lies his trailer, unconnected to water or electricity. He is connected to an outlet by extension cord through his neighbor’s fence, which he uses to plug his phone. Youngblood’s home, originally at the back of the lot, recently burnt down in a fire, along with many opportunities he still mulls over.

Youngblood is tall, scraggly and hunched over; he has no teeth but for two bottom molars, jagged and gray. As a Medi-Cal patient, he also has access to full dental services. On his last visit to a nearby clinic, he was given an appointment with an oral surgeon to have his final teeth removed and replaced with two full sets of dentures.

Finally, he thought, potatoes and spam would be replaced by tacos or steak, his favorite meals.

But along with his home, Youngblood lost his ID in the blaze, which he needs to access his Medi-Cal benefits. With only $96 in General Relief, he hasn’t had the means to get to the DMV and secure a new ID, which costs $40. His teeth, which gradually crumbled out of his mouth because of poor hygiene, are always on his mind.

He’s embarrassed. “I haven’t even tried (to get a job) because I know they’re not going to give me a job looking like this. I was in the hair business. You’re supposed to look beautiful.”

Almost a third of low-income Californians say the appearance of their mouth and teeth affects their ability to interview for a job, according to the American Dental Association.

Before being a hairdresser, Youngblood was a restaurant host. But he doesn’t think he could ever go back to that, either. Standing or walking around much is out of the question, as he has arthritis and suffered a stroke.

As he finished sharing his story, Isabel crossed over his broken fence to say hi to two weeks-old puppies, who stayed inside the trailer. Dozens of dogs live on his property, whom Isabel mostly feeds. Youngblood said he had been trying to give some of them away, but it would be tough to part with the newborns.

“I call her baby girl,” he said, motioning to the fluffy, cream-colored dog who almost fit in the palm of his hand.

Manuela Tobias covers poverty and inequality in the Central Valley for The Fresno Bee. This dispatch is part of a series called “On the Ground” with Report for America, an initiative of The GroundTruth Project. Follow her on Twitter: @manuelatobiasm.