Attempted coup or auto-coup? Either way, an attack on the guardrails of democracy 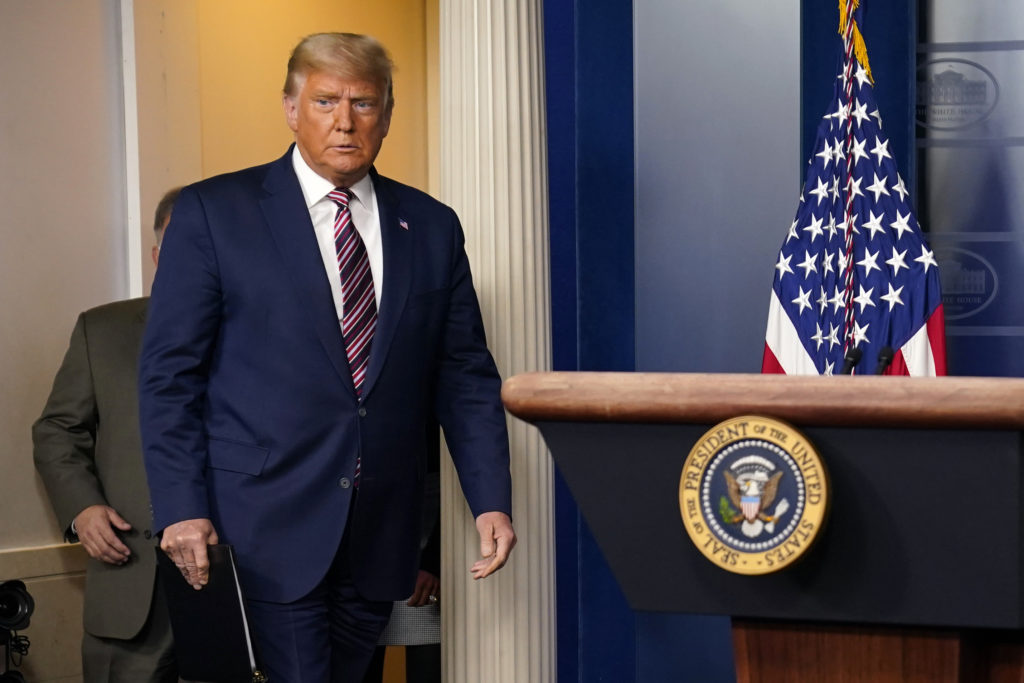 President Donald Trump has falsely claimed that there was election fraud, in an attempt to de legitimize Joe Biden's victory. (Photo by AP Photo/Evan Vucci)

WASHINGTON — Like yelling “fire!” in a crowded room, alleging an attempted coup is not something to be done without evidence.

But consider the signs that something is wrong: Donald Trump has refused to concede the election to President-elect Joe Biden despite the fact that Biden was declared the winner with 290 electoral votes to Trump’s 217, according to every major media outlet from AP to FOX News. He has purged top national security staff, including the Secretary of Defense. His team has denied transitional funds, White House office space and the customary national security briefing to Biden. Some Republican leaders are arguing for a last-ditch effort for state legislatures to flip “faithless electors” to Trump. And a large majority of the GOP leadership, including Senate Majority Leader Mitch McConnell and House Minority Leader Kevin McCarthy, is at least publicly enabling Trump’s dangerous state of denial.

The Constitution is very clear: “The terms of the President and the Vice President shall end at noon on the 20th day of January.” Whether Trump is in the White House at that moment, on the golf course in Virginia or holed up at Mar-a-Lago, Biden becomes President on that day.

However, some Trump administration officials are willfully ignoring the Constitution. Secretary of State Mike Pompeo told the press with a puzzling smirk on Tuesday, “There will be a smooth transition to a second Trump administration. All right? We’re ready.”

Ready for what, exactly? The question lingers as reality-based constitutional scholars, politicians and journalists are trying to understand the intentions of this White House in refusing to concede the election.

A bipartisan coalition of state and federal officials declared this election “the most secure in American history.” Allegations of voter fraud by some Republican leaders have gone unsubstantiated. A flurry of unsuccessful lawsuits has riled up the die-hards. And in states like Georgia and Arizona, Republican officials have faced MAGA backlash for daring to endorse the results.

All states certify election results by Dec. 8, the “safe harbor” deadline before the Electoral College meets on Dec. 14. The President of the Senate, currently Vice President Mike Pence, must receive the electoral vote certificates by Dec. 23, and Congress convenes to count them on Jan. 6.

While Georgia is in the process of recounting all votes because the difference between Biden and Trump is less than 0.5%, Biden leads by approximately 14,000 votes so the recount is extraordinarily unlikely to change the final result, nor is pending litigation in the state. Likewise for unresolved lawsuits in Pennsylvania, Michigan and Nevada.

So while the now lame-duck Trump administration brings no merit to the argument, it is obstructing the peaceful transition of power, which is the hallmark of democracy. Which, perhaps, is the point.

Erica de Bruin, an assistant professor of government at Hamilton College and author of “How to Prevent Coups,” says that what Trump is doing is best called a “self-coup,” or autogolpe in Spanish.

De Bruin argues in the Washington Post this week that without the support of the military, such autogolpes are exceedingly unlikely to work. And Gen. Mark Milley, the chairman of the Joint Chiefs of Staff, seemed to make his position clear in an event dedicating a military museum on Wednesday as the nation marked Veterans’ Day.

Yet even an unsuccessful attempt to hold onto power is incredibly dangerous, a violation of what historians Steven Levitsky and Daniel Ziblatt called “the soft guardrails of American democracy.” These are “mutual toleration, or the understanding that competing parties accept one another as legitimate rivals and forbearance, or the idea that politicians should exercise restraint in deploying their institutional prerogatives.”

The vehicle of our constitutional republic seems to be careening  right up against these guardrails beyond which lies the deep ravine of an authoritarian government. A number of conservative leaders are finally acknowledging the danger, calling for Trump to concede, but grave damage has already been done.

But the Trump base — those whose adoration continued to swell through Trump’s violation of nearly every democratic norm using what GroundTruth has called “The Authoritarian’s Playbook” — has been further inflamed by Republican allegations of fraud. Calls to “stop the count” in the days following Election Day have given rise to planned “Stop the Steal” rallies in Texas, Florida and Washington, D.C.

Facebook and Twitter have finally begun to clamp down on these conspiracies, so believers are moving to platforms like Parler, which court users by promising little or no restrictions on what they can say on their service.

And Trump and his allies — elected and unelected — appear ready to present an obstructionist, oppositional movement aimed at grabbing back the White House in 2024. That is, assuming our democracy holds and Trump’s resistance movement yields to a peaceful transition of power. Restoring the guardrails of democracy has never been more crucial.