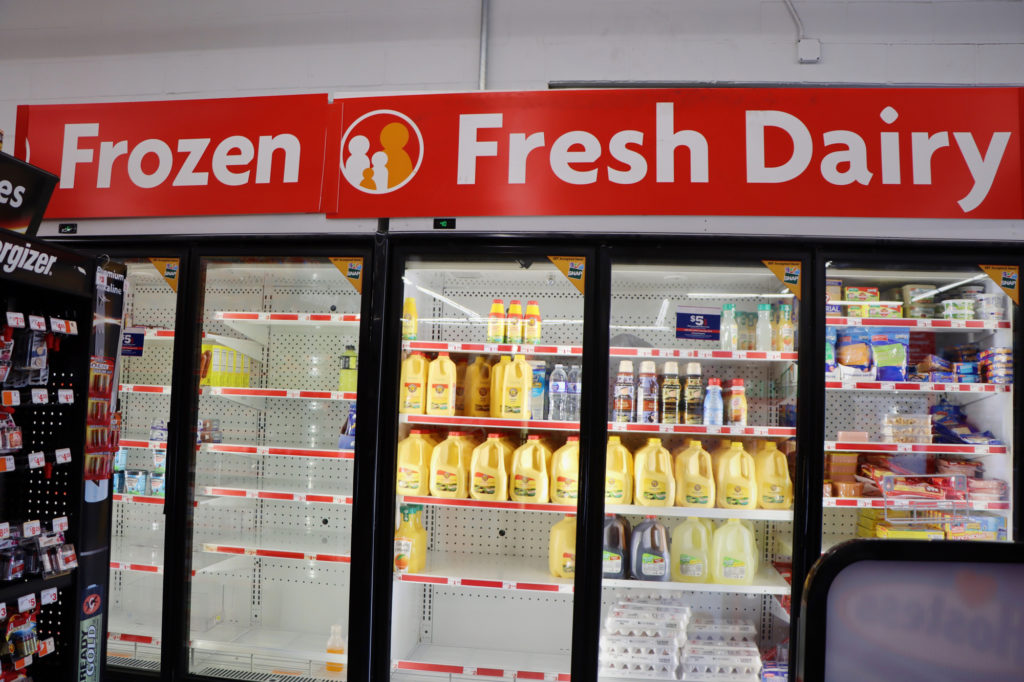 ATLANTA – In the heart of Atlanta, 61-year-old Wayne Ricketts spends his days rooting up weeds, harvesting the year’s final crops and planting seeds before the winter sets in.

Ricketts tends to two urban farms in the English Avenue neighborhood where everyone calls him ‘Jamaica’ after the island where he was born. Both farms are owned by the Friends of English Avenue, a local non-profit founded in 2009. On that day in early fall he was at the Elm Street farm prepping the crop beds for the next year.

Residents in the neighborhood, especially those without a car, have a hard time accessing fresh food such as fruits and vegetables because the grocery stores are too far. For groceries, a typical neighborhood resident has to walk 30 minutes or take public transportation to get to the Walmart Supercenter, the nearest grocery center more than a mile away. Barriers like these have forced some residents in the community to look to Jamaica to bring them whatever he is growing in the garden.

Sherita Arnold, who raised her five kids in English Avenue, is grateful that she regularly receives collard greens, tomatoes, okra and anything else Jamaica grows. “He believes in feeding the children and the people— older people that can’t get out and go to the store. They can’t go out and buy fruits and vegetables and stuff, so he gives it to them,” Arnold told the Atlanta Voice.

Food access issues faced by neighborhoods like English Avenue and other low-income areas in Atlanta got a lot worse last year as the coronavirus pandemic shut down businesses and forced thousands out of work. Across Georgia, the share of the population deemed food insecure jumped from about 13 percent in 2018 to 18 percent in 2020, according to an analysis by the Federal Reserve Bank of Atlanta. That included a near 60 per cent jump in the number of children experiencing food insecurity — from a little over 400,000 in 2018 to more than 640,000 in 2020.

The result was a crush of demand at the local food bank. “We’ve distributed 60 percent more food in the last 14 months,” said Jon West, a vice president at the Atlanta Community Food Bank. “This wasn’t a goal of ours but a necessity.” West said the two primary “drivers of need” that his organization tracks are increases in poverty and unemployment. “COVID has been a perfect storm to drive both those things up,” West said.

Unsurprisingly, during the height of the coronavirus pandemic last year, a lot of the people forced to rely on area food banks for feeding their families had never sought such help before. “They are accessing the emergency food network for the first time because they’ve lost their job,” Dana Craft, executive director of the Georgia Food Bank Association, told the Atlanta Fed.

In Atlanta, as in many other parts of the nation, access to fresh, healthy food is a problem that disproportionately affects the Black population. In 2020, nearly 3 out of 4 residents in neighborhoods with low food access were Black according to a recent report from the city, even though Black population accounts for about 50 percent of Atlanta’s total population.

The city began tracking the severity of the food access problem in 2019 with its annual Fresh Food Access reports, which focuses on low-income neighborhoods experiencing low access to fresh healthy food as defined by the U.S. Department of Agriculture. Last year, about a quarter of the city’s population experienced food insecurity — over 120,000 Atlanta residents, who live in predominantly poor, predominantly Black neighborhoods, according to the city’s food access report published in May.

For a long time, the USDA, which tracks food access nationally, used to call such neighborhoods “food deserts.” The agency has moved away from using that label in recent years but it has stuck with researchers studying the issue. Advocates are now pushing back because they say the label is misleading and prevents a full understanding of the root causes of the problem.

“We look at it more as food redlining,” said J.Olu Baiyewu, Urban Agriculture Director for the City of Atlanta. “A desert is a natural ecosystem. Food deserts are human-made through public policies and corporate policies. We don’t want people to think this is natural.”

In search of solutions

Over the years, elected officials have tried different solutions to reduce food insecurity among Atlanta residents.

The Metropolitan Atlanta Rapid Transit Authority (MARTA) has a 6-year-old Fresh MARTA Market program where residents can buy produce at their local station once a week from 3 p.m. to 7 p.m. Such markets are available at five of 38 MARTA stations now but the city has made it a top policy recommendation to expand the program throughout the city. The program is run by Community Farmers Markets (CFM), an Atlanta-based non-profit. According to Lauren Wood, the Fresh MARTA Market program director at CFM, they serve around 100 people at each market.

“Ridership overall on the MARTA is down,” said Wood. “Our attendance and our overall volume of foot traffic has gone down but our sales have remained steady so it’s an interesting phenomenon because there are less people coming to the stations [for public transportation] but we’re still selling just as much produce.” Even if the MARTA market program was expanded, they would still only be at each station one day a week. To address daily access to produce the city connected with EPA Region 4 and the Food Recovery Network to create ‘Atlanta Fresh Corners’ in mid-2020.

The project focuses on saving produce that doesn’t make it off the farm, and getting it into corner stores, according to said Baiyewu, the city’s urban agriculture director.  “By working with a consortium of farmers, gleaners, and food recovery delivery agencies, the team has been able to redirect 20,000 pounds of food that would have otherwise been left on the fields, into a new revenue stream for all involved — selling this produce at deep discounts in four corner stores,” Baiyewu said. In 2022, his team is aiming to add ten more corner stores in low income areas with low access to fresh foods. To support existing neighborhood stores and markets that offer fresh foods, the city created an interactive map of the stores in Atlanta that sell fresh food.

The city, he said, is also exploring the creation of a neighborhood markets association “that can leverage each other for resources & opportunities, as well as be a consistent ‘voice’ to guide officials. Jon West, of the Food Bank, said his organization is always advocating for officials to prioritize funding to programs and services that help increase food access. “The number one poverty fighting program in the United States is SNAP,” West said, referring to the federal program that supplements “the food budget of needy families so they can purchase healthy food and move towards self-sufficiency.”

For families under financial stress, West said, food is just one of the essential services that have been difficult to access since the start of the pandemic. One of the other approaches trying to solve the food access problem is the rise of urban farms. Atlanta’s 28 urban farms have expanded food access in the South and West of the city where residents are less likely to have access to a supermarket, according to the city’s 2020 Fresh Food Access Report. Supermarkets and the Fresh MARTA Markets accept SNAP/EBT whereas only around 50% of neighborhood and farmers markets accept it.

In the English Avenue neighborhood, grocery stores haven’t opened a branch because the neighborhood is primarily low income, according to Antonio Brown who represents the area in the City Council. Another solution that city officials are betting on is allowing more urban farms to sell directly to consumers, especially urban farms in residentially zoned areas.  Atlanta City Council passed an ordinance to allow this in early September. The city expects this will increase fresh food access for approximately 15 percent of residents in low-income areas with low access to fresh food.

If all 28 of the city’s urban farms began selling onsite, Baiyewu said, it would bring 32,000 Atlanta residents living in food insecure neighborhoods within a half mile of a source of fresh food.  “This could contribute to fewer individual trips to a grocery store including for those that utilize public transportation to move around,” Baiyewu added.

Responding to how the pandemic compounded food access problems, Atlanta City Councilman Michael Julian Bond partnered with HelloFresh this summer to have meal kits delivered to food insecure families in Atlanta. HelloFresh will work with Atlanta-based meal kit company Pratt Industries to deliver 2,000 meal kits a week with a goal of delivering 400,000 meals in Atlanta by 2022. Each kit can produce four meals. The 2020 report found that food delivery services grew during the pandemic, including services that deliver not just meals, but all kinds of groceries.

From the streets to the farm

English Avenue’s urban farmer “Jamaica,” moved to the U.S. in 1972 as a twelve-year-old, to live with his father who was in the Bronx at the time. By 15, Jamaica was living on the streets, and sometime soon after he became addicted to crack.

Jamaica finally moved to Atlanta in 2004 to get away from trouble he had gotten into up north. Soon after, a friend in Atlanta introduced him to Susan Baker, the then coordinator at the urban farm’s coordinator, because he had learned how to farm as a child in Jamaica. The Elm Street farm alone produced nearly 3,000 pounds of food in 2015. Jamaica gives 90% of the produce to families in the English Avenue neighborhood and the remainder is sold to local restaurants. All of the food at the English Avenue Farm is given to the 25 member families. All of the 97 members are at or below the federal poverty line, 46 adults, 37 children and 14 senior citizens.

“I enjoy giving people food, you know because in this neighborhood sometimes there’s people that don’t have anything,” Jamaica said. “This helps me a lot— helping the people and helping myself because this keeps me away from my addiction. To see people smile, just to see somebody happy when you drop off the fresh vegetables.”

Madeline Thigpen is a Report for America corps member with The Atlanta Voice covering education. This story is part of ‘Barren Mile: COVID-19 and the fight against food apartheid,” the result of a Report for America initiative that brought Black-owned newsrooms from New York, Georgia, Missouri, and California together to look at how COVID-19 impacted food insecurity in their communities.