ON THE GROUND IN WOODS HOLE, MA

At the sea’s edge: Covering climate change from the Cape Cod coast 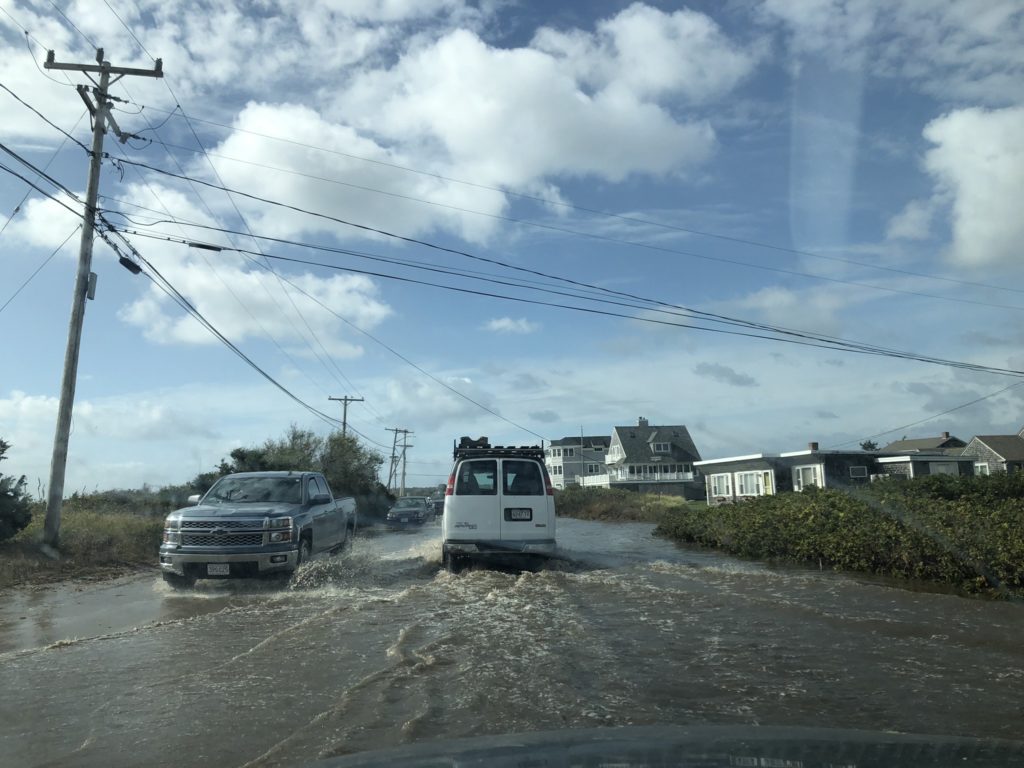 Surf Drive, an iconic coastal road in Falmouth, MA, is flooded on October 17, 2019 after a powerful storm. As sea level rise, erosion and flooding increasingly threaten the area, the Town of Falmouth is developing resiliency plans that could reroute, elevate, or even abandon parts of the road. (Photo by Eve Zuckoff/GroundTruth)

Reporting on, and witnessing, the impact of climate change on my home in Cape Cod can be a lonely and painful task. But it’s too important to ignore.

WOODS HOLE, Mass. — As you jog along the curving three-mile road that leads down to the water on the southernmost tip of Cape Cod, you’ll pass five of the world’s leading marine and environmental institutions.

You’ll glimpse the solar arrays and wind turbine of the Woods Hole Research Center, where scientists and scholars study climate change and its impact around the world. You’ll wind your way past our local U.S. Geological Survey center, within the Quissett campus of the famed Woods Hole Oceanographic Institution. Just as you begin questioning why you started running in the first place, you’ll hit the Marine Biological Laboratory, a private nonprofit that is affiliated with 58 Nobel Prize winners since 1929. And finally, after passing exhausted doctoral students working in the coffee shop, you’ll reach the harbor by the National Marine Fisheries Services.

The run ends on a grassy patch of land, known locally as Sundial Park, where rock walls drop sharply into Vineyard Sound.

There, probably wheezing, you’ll smell the briny water and see the statue of a cross-legged scientist seated on a bench, notebook in hand, smiling coyly at the sea.

My relationship with the mother of the environmental movement, the late marine biologist Rachel Carson, began in August. It was three months into my term with Report for America as the climate change reporter for WCAI, the public radio station for Cape Cod, Martha’s Vineyard and Nantucket. Carson — or at least her statue — has been my confidant and my salvation on days when I wilted under the strain of covering an endless disaster. Where the renowned scientists at nearby institutions offer facts, she provides wisdom.

“To stand at the edge of the sea … is to have knowledge of things that are as nearly eternal as any earthly life can be,” she wrote in “Under the Sea-Wind,”  her 1941 book.

I didn’t intend to run this route each week. I started after reporting a story on the Falmouth Road Race, a summer tradition here, seeking out runners worried about the future of the race in the context of rising global temperatures. I found a group of women — most of them more than twice my age — who comprise an informal, weekly “run club.” After running with them once, microphone in hand, I was hooked.

Our runs are often the relief I need after days mired in scientific reports that suggest our planet’s tipping point is approaching. Recently, I asked my new friends if they think about climate change and its impacts on Cape Cod.

I expected them to joke, as they so often do, or say “Of course” and move on. But they didn’t. They divulged worries about their beloved beaches, bike paths and landmarks. They expressed concern for the road they drive daily that might soon disappear, and about how to talk to their children about our changing landscape. These women lose sleep, they said, because the places they’ve known and loved might not always be here.

Left out of their remarks is the unspoken, underlying question of time. As in, when will we lose parts of our community? How soon until we need to retreat from the coast? Can we enjoy another 50 years here? Thirty years? Ten?

Throughout my reporting, no one has ever asked me these questions, maybe because there’s always a degree of uncertainty in scientific predictions. But maybe also, as one woman told me, because the answers come with feelings that are just too big.

As carbon emissions increase globally, sea levels on the Cape could rise by as much as three feet by 2050. If that’s the case, we’ll see wetter, more intense and disruptive storms, even tornadoes. We will see the coastline erode, habitats lost, growing seasons changed. We’ll witness homes swept away, sea walls crumbled, communities displaced.

Decades ago, Rachel Carson knew this track we were on.

“Only within the moment of time represented by the present century has one species — man — acquired significant power to alter the nature of his world,” she wrote in “Silent Spring.”

Though she was writing in 1962 about chemical pollutants like DDT, rather than climate change, she railed at the inability of so many of us to see — to act upon — the injustice of possibly human-wrought environmental catastrophe. “We stand now where two roads diverge,” Carson wrote. At the end of an unchanged course, she predicted, “lies disaster.” Only on the alternative path will we “reach a destination that assures the preservation of the earth.”

Reporting about an oncoming catastrophe can be a lonely and painful task, a repetitive cycle of relentless calamity and unheeded warnings. But one of Carson’s central messages, and an abiding tenet of the women’s run club, is that no matter how hard the road ahead, the way forward is together. Or, as Carson put it, “In nature, nothing exists alone.”

Eve Zuckoff is a Report for America corps member, covering climate change for WCAI, the local NPR member station for the Cape, Islands and South Coast of Massachusetts. This essay is part of GroundTruth’s “On the Ground” series. Follow Zuckoff on Twitter: @evezuckoff

A version of this story appeared on USA TODAY on December 19, 2019