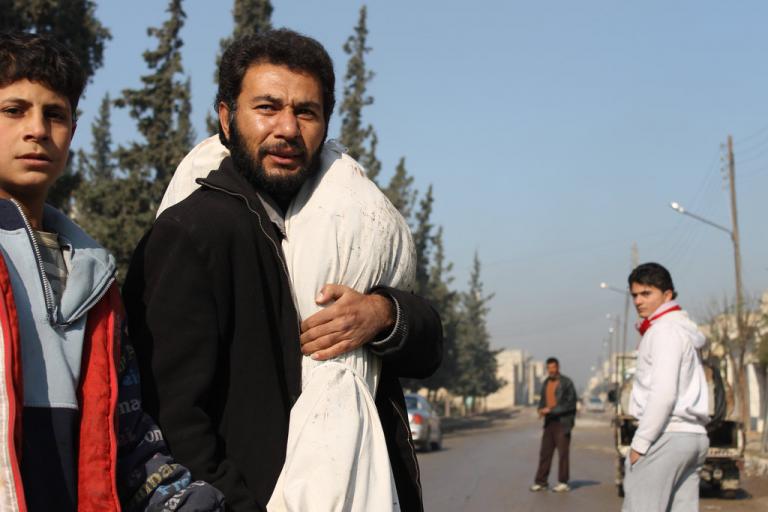 A Syrian man carries body wrapped in shrouds over his shoulder following airstrikes on a rebel area of the war-torn northern city of Aleppo on December 15, 2013. The Aleppo Media Centre, an activist network on the ground, reported several helicopter attacks on rebel areas of the city, once Syria's economic hub. - ((Mohammed Ali-Khatieb/Getty Images))

The splintering of the Free Syrian Army is seen by many regional analysts as a sign of the increased sectarianism of the civil war. What began as an Arab Spring uprising against dictatorship has become a vehicle for extremists who attack all government supporters as infidels and apostates. For its part, the Assad regime rallies minority Shiites and Alawites by condemning Sunni rebels as takfiris, or “impure Muslims.”

Assad’s idea, these analysts contend, was to play up the sectarian divide as a way to fracture and weaken his opposition. It appears Assad’s strategy may be working.

The civil war has claimed more than 100,000 lives, forced 2 million refugees to flee and 3 million to be internally displaced. Assad supporters see him as a strong leader fighting against chaos and extremism.

Extremist groups have been fighting US-supported rebels for months. The first evidence came in July when the Islamic State of Iraq and Syria (ISIS) expelled the FSA from several northern cities, including Raqqa. The ISIS then imposed a severe interpretation of sharia law that includes imprisonment and torture of anyone who opposes the ISIS.

Adding to the Islamist momentum, a new and increasingly powerful coalition of extremist militias, the Islamic Front, seized a warehouse last week controlled by the FSA. The storage facility inside Syria near the Turkish border was chock full of trucks, supplies and weapons.

According to some reports, General Salim Idris, head of the FSA, fled to Turkey after his men gave up the warehouse without a fight, leading the Obama administration to announce it wouldsuspend “non-lethal aid” to opposition groups. This debacle revealed the weakness of the pro-US militias, according to Joshua Landis, director of the Center for Middle East Studies at the University of Oklahoma.

“Idris is a stuffed shirt and has no troops,” said Landis in a phone interview. Fighting between pro-US and ultra-conservative militias“is a viper’s nest. Everyone is scrambling for power.”

Landis noted that the Islamic Front, along with two ultra-conservative groups affiliated with al Qaeda, now control swaths of northern and southern Syria. Those groups also control towns on the outskirts of Damascus, and regularly lob mortar shells into the capital.

In recent weeks the government has taken back control over some of the Damascus suburbs, along with portions of the important cities of Homs and Aleppo. So overall, the civil war remains a stalemate.

Government officials argue that they are protecting secular rule. Minister of Justice Najm al Ahmad, in an exclusive GlobalPost interview, said the rebel groups promote extremism and religious hatred. He said the Syrian Army’s progress so far comes from popular opposition to “these terrorist groups and their takfiri methodology. The people suffer from the terrorist actions.”

Assad is an Alawite, a small sect of Muslims with roots in Shia Islam. Less than 15 percent of Syrian Muslims are Shia, while an estimated 74 percent are Sunni. Before the uprising began the rift between the sects had been limited to the religious sphere. Now both sides use the differences to rally their supporters.

Yet after nearly three years of fighting, the government has failed to win the war. Analysts in Damascus say that can be traced, in part, to Assad’s economic policies.

In the early 2000s, Assad’s government privatized some state-run industries and lowered tariffs on imported goods, following an economic model promoted by the International Monetary Fund and World Bank.

Such policies increased poverty in the mainly Sunni, rural areas, according to Dr. Bassam Barakat, a pro-government political consultant.

For Bakarat and other analysts the defining line in this conflict is not religious, but economic.

“Textile and other factories were no longer subsidized by the government,” Bakarat said. “They allowed Turkish commodities to enter without taxes. The national industry was completely damaged.”

Unemployment grew as factories shut down and farmers couldn’t compete with cheap imports.

“The Syrian regime made a big mistake,” Barakat said. “We had an army of unemployed young people and new groups started to emerge.”

Initially, Muslim youth flocked to the Muslim Brotherhood, a group that had been fighting the government since the 1970s. The old Brotherhood leadership had been jailed or forced into exile, and a new leadership arose.

The Brotherhood established a headquarters in exile in Istanbul, Turkey. They repudiated some of their earlier ultra-religious views and proclaimed support for a parliamentary system that would include free elections and protection for minorities.

But the Brotherhood and its affiliated militias didn’t agree with US policy in the region. Like most Syrians, the Brotherhood leadership opposed the US invasions of Iraq and Afghanistan, and wanted Israel to return the Golan Heights, seized from Syria in 1967.

During the first two years of the uprising, the Brotherhood dominated various civilian and military coalitions formed to oppose Assad, much to the chagrin of the Obama administration.

“America didn’t want the Muslim Brotherhood to rule,” said Professor Landis. “It was too Islamist for the US, but in fact, it is the least Islamist. The US wants a Chalabi,” referring to Ahmed Chalabi, an Iraqi opposition leader backed by the US before the invasion, but who had little popular support.

During the past year, extremist groups grew in influence. The Al Nusra Front and the ISIS both proclaim their affiliation with al Qaeda, although they remain operationally independent.

The growth of extremist groups has posed a significant problem for civil society activists, those who advocate a secular parliamentary system for Syria and who played a prominent role in the early days of the uprising.

In 2011 I interviewed several such non-violent protesters in Damascus. Mahmud has since moved to Dera in southern Syria, where he joined the FSA. The former secular journalist and playwright became a devout Muslim.

Leen, his friend and fellow activist, admitted that Mahmud and many others have undergone a political transformation.

“The FSA is conservative,” said Leen, “because it wants Islam to play an important role in a revolutionary government, but it’s not extremist. The ISIS, which is mostly foreign fighters, wants to impose a religious dictatorship on Syria.”

Leen blames the rise in sectarianism on the Assad government, which promoted sectarian divisions from the very beginning of the uprising.

“Assad rallied Alawites against Sunnis by calling them takfiris,” or impure Muslims, she said. Even during the opening weeks of the popular uprising, the government accused peaceful demonstrators of being al Qaeda extremists.

Extremist rebels also fan religious conflict, she admitted, by lobbing rockets and mortars into civilian areas of Damascus. Many land in Christian neighborhoods near the Old City, leading many to suspect the rebels deliberately target Christians.

Leen criticized such attacks as immoral and likely to alienate civilians from the rebel cause. But she admitted that many rebel supporters justify such attacks because of the army’s horrific shelling of rebel-held areas.

“The government has laid siege to rebel towns, cutting off food, water and medicine,” she said. “What do you expect people to do?”

Government supporters make similar justifications for army attacks on civilians in rebel areas. Alaa Ebrahim, a local TV reporter, argued that the Syrian Army tries to be selective in its attacks. But he said some government supporters think bombardments are justified because civilians provide a “nurturing environment” for the rebels.

Ebrahim strongly disagreed with this view, but said some government supporters are convinced “if the civilians don’t leave rebel areas, they must support the rebels.”

Ebrahim brings an interesting perspective to the issue of religious tensions in Syria. He pulled out an iPhone to display idyllic photos of family and friends in his home village near Syria’s Mediterranean coast. In happier times, they enjoyed the area’s beautiful waterfalls and picturesque mountains.

He also described the good relations among the village’s diverse religious groups. Sunni Muslims, Christians and Alawites get along well, he said, despite the increase in religious tensions elsewhere in Syria. Ebrahim said Sunnis in his village support the government of Assad so they don’t come under suspicion.

In the cities where rebels are fighting for control, however, entire Sunni neighborhoods are cordoned off with army checkpoints and become no-go zones at night. The army also lays siege to mostly Sunni, rebel-controlled towns, frequently preventing entry of food, medicine and other essentials.

Ebrahim said the conflict in Syria remains political, not religious, pitting western-backed rebels against the Assad government. He noted that Syria has a long history of secularism, with friendships and marriages cutting across religious lines.

However, sectarian conflict has seriously impacted the country because Christians, Shia Muslims and other minorities support the government. Many Sunnis do not. Assad draws particularly strong support from Alawites.

“As an Alawite government employee, if you’re invited to dinner by a Sunni, you would be afraid of an ambush,” Ebrahim said. “You would refuse. Trust has broken down.”

He initially felt some sympathy for the peaceful protestors demonstrating in the early months of the uprising. But he believes that religious extremists now dominate, leaving little room for civilian opposition.

And then earlier this year he faced a personal tragedy. His mother, a Syrian Army officer, was assassinated by a rebel sniper, who killed her with a single shot at a distance of 1300 yards. An army investigation revealed the rebels had inside help.

His mother’s assassination was just one more indication of a technically proficient enemy with intelligence capability even within the military. He said the conflict will continue as long as outside powers such as the US and Saudi Arabia fund the rebels.

Civilian opponents and rebels make the same argument regarding the government. “Assad would fall quickly if he didn’t receive support from Russia, Iran and Hezbollah,” said activist Leen.

Both Leen and Ebrahim agreed that, whoever wins, Syria has changed forever.

GlobalPost special correspondent Reese Erlich’s reporting from Syria was supported in part by a travel grant from the Pulitzer Center on Crisis Reporting. Erlich’s book on the Syrian uprising will be published by Prometheus Books in the fall of 2014.