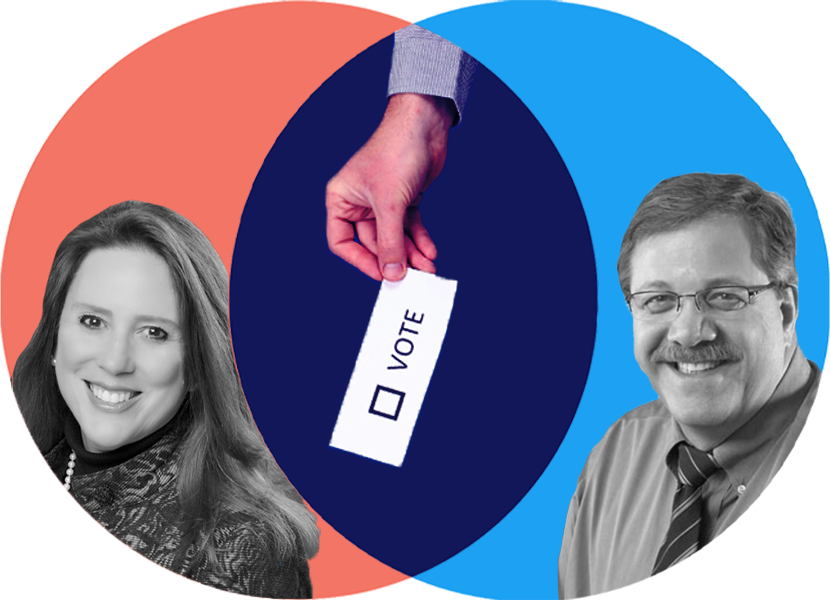 WASHINGTON ⁠— Although they are rarely in the spotlight, secretaries of state serve as the gatekeepers of free and fair elections in many states across the country.

Responsible for issuing drivers’ licenses and keeping state records, their offices also register voters and determine the election procedures that will impact how people cast their ballots in the upcoming November election.

And as the top election administrators in 37 states, they face unprecedented hurdles to running safe elections during a pandemic.

“Secretaries of state are on the front lines of ensuring our democracy,” said Christopher Guerrero, executive director of the Democratic Association of Secretaries of State. “Not all are the chief elections officer of their state, but the majority of them are, so they play a role in making sure that our citizens have access to voting, whether it’s in person or by mail, safely and securely.”

To Kim Wyman and Jim Condos, the secretaries of state in Washington and Vermont respectively, the key to ensuring a fair and safe election is to enforce equitable voting procedures that give citizens multiple options for casting their ballot, regardless of party affiliation.

After President Donald Trump suggested last week that he would withhold funding from the United States Postal Service, in an attempt to undermine vote by mail and delay the presidential election, many election officials across the country and political aisle are stepping up to the plate to restore confidence in the voting system.

“As secretary of state, my role is to try to inspire confidence in the public that our election was fair and accurate,” Wyman said in an interview with GroundTruth. “And the way that we do that here in this office is by making sure that there’s a balance between access and security in everything we do ⁠— that any voter who is eligible has the opportunity to register and vote.”

Wyman is a Republican who has been at the forefront of progressive voting reform at the state and national level, working to expand universal vote-by-mail without restrictions on when ballots are received ⁠— despite her party’s insistence that voting by mail is a recipe for fraud. Condos, a Democrat, is also pushing for a more accessible vote-by-mail system where every registered voter will be automatically mailed a ballot, though Vermont law still requires ballots be received by 7 p.m. on Election Day in order to count.

“Many of my colleagues ⁠— Republicans and Democrats, pretty much all of us ⁠— have been working to expand vote-by-mail in one form or another,” Condos said in an interview with GroundTruth. “You have five states ⁠— Washington, Oregon, Colorado, Utah and Hawaii that vote universally by mail and there’s never been a problem with it.”

These five western states all hold their elections entirely by mail and automatically send ballots to eligible voters, recently receiving an A grade from the Brookings Institution for their vote-by-mail access during the pandemic. ⁠Alabama and Missouri were the only states to receive an F grade, with most southern states receiving C’s.

Washington residents have been voting by mail for over a decade, and recent legislation has made it even more accessible with postage-free ballots and tracking technology to ensure election security. Washington adopted voting by mail in 1993 and it was made statewide practice in 2011.

Wyman rejected the notion that the upcoming election will be marred by people voting illegally, and invited Trump to inspect the safeguards of Washington’s ballot process in person.

During the 2018 election there were 142 cases of voter fraud out of 3.2 million ballots cast in Washington ⁠— just 0.004% of the state’s population ⁠— where people had cast more than one absentee ballot from outside the state or voted on behalf of a deceased family member, she said.

“It’s not perfect, but it’s not rampant fraud,” Wyman added. “And I think that’s really indicative of the experience we’ve had in Washington, where you may have the occasional voter that tries to test the system or make a mistake, but we haven’t seen real organized voter fraud.”

As the president seeks legal action against states that favor mail-in voting, announcing that states should run their elections like Florida and Georgia, many critics, including Condos, have expressed concern that the president is enabling voter suppression.

In Georgia, the state’s Democratic Party recently filed a joint lawsuit against state election officials, including Republican Secretary of State Brad Raffensperger, after primary voters were once again plagued by long lines, broken machines and fears of voter suppression. The long lines, many believe, are a result of Georgia’s decision to not send out absentee ballot applications for its upcoming election, instead requiring voters to request absentee ballots online.

A recent report from the Center for American Progress Action Fund and Democratic Association of Secretaries of State found that Black and Brown communities are disproportionately affected when polling places are closed and states lack easy alternatives to in-person voting.

“The disparities in how secretaries of state are working to secure access to the ballot box are alarming, as the result is often the continued disenfranchisement of African American voters,” the report says. Guerrero, one of the authors of the report, said secretaries of state can protect the voting rights of marginalized communities by working with state legislatures to ensure funding to keep polls open, as well as mail ballots and provide free postage to all residents.

According to professor Charles Stewart, director of MIT’s Election Data and Science Lab and an expert on election administration, Georgia law gives the secretary of state “broad discretion” over election procedures, allowing them to issue directives to individual counties that must be followed. Failure to comply with the secretary of state’s orders will result in sanctions, such as monetary fines.

On the other hand, states like California are moving forward with plans to distribute millions of mail-in ballots to registered voters for the November election, despite attacks from the White House. In June, Gov. Gavin Newsom (D-Calif.) signed a bill that requires all registered voters to be sent a mail-in ballot in an attempt to prevent large gatherings at polling sites. Mail-in ballots postmarked by Nov. 3 can arrive up to 17 days after the election and still be counted.

California Secretary of State Alex Padilla, a Democrat, said in a statement that a rapid expansion of vote-by-mail in one of the largest states is no small task, but counties are in the process of printing and mailing more ballots than ever before.

“Mailing every registered voter a ballot this fall is a huge first step to preserving access to democracy during the COVID-19 pandemic,” Padilla said. Ballots will be mailed to voters in a special identification envelope that is uniquely coded to each voter to ensure protection against fraud.

This identification system, which is now used by 39 states, allows voters to track their ballot at every step of the process, including where the ballot goes after being dropped off, similar to how one tracks a package. As ballot security concerns grow, these measures can be applied to the U.S. Postal Service to alleviate potential lost ballots.

The California Voter Foundation found that 1.7% – or just over 100,000 – state vote-by-mail ballots for the March primary election were not counted for reasons including late arrival and missing or invalid signatures. In Michigan, more than 10,000 absentee ballots were rejected ⁠— many because of late arrival ⁠— even if they were postmarked prior to primary day.

Despite thousands of votes tossed, a record 2.5 million votes were still cast in the Michigan August 4 primary as people took advantage of the state’s no-excuse absentee voting policy amid the coronavirus pandemic. About 60% of those votes ⁠— 1.6 million ballots ⁠— were returned by mail or at drop boxes.

“The success of the primary proved once again that Michigan can hold safe, accessible, secure and on-schedule elections during the pandemic, and this will serve as our blueprint for the presidential election,” Michigan Secretary of State Jocelyn Benson said in a statement.

Similarly, in Colorado, 99.3% of all voters cast their ballot by mail during the June 30 primary election — leading to a record turnout. State officials deemed the mail-in-ballot system a success among Republican and Democratic voters alike, with Republican voters opting to use mail ballots at a slightly higher rate than Democratic voters, contrary to the president’s claim that mail-in-voting will benefit the Democratic party.

In Vermont’s Aug. 11 primary, over 150,000 people requested absentee ballots, compared to just 17,000 in 2018. Overall turnout was around 61,000 votes higher than the last primary election. “I fully expect for the general election in November that we’re going to see another strong turnout and probably break a record there as well,” Condos said.

In Washington’s Aug. 4 primary election, the state scored its highest voter turnout since 1964, with 54% of residents voting.

Washington’s secretary of state Wyman says her philosophy to voting comes from a personal experience when she and her husband lived in Germany ⁠— where he was stationed with the Army ⁠— and they received their absentee ballots the day after the election.

“At the time, I didn’t realize how important voting was to me, but when you have that right taken away because of an administrative error, you realize that it matters,” she said. “I just made a promise to myself that I would protect the rights of everyone whose voting I oversaw and everyday since I have worked to that end.”