As ‘The Vindicator’ goes silent, can Youngstown fill its news void? 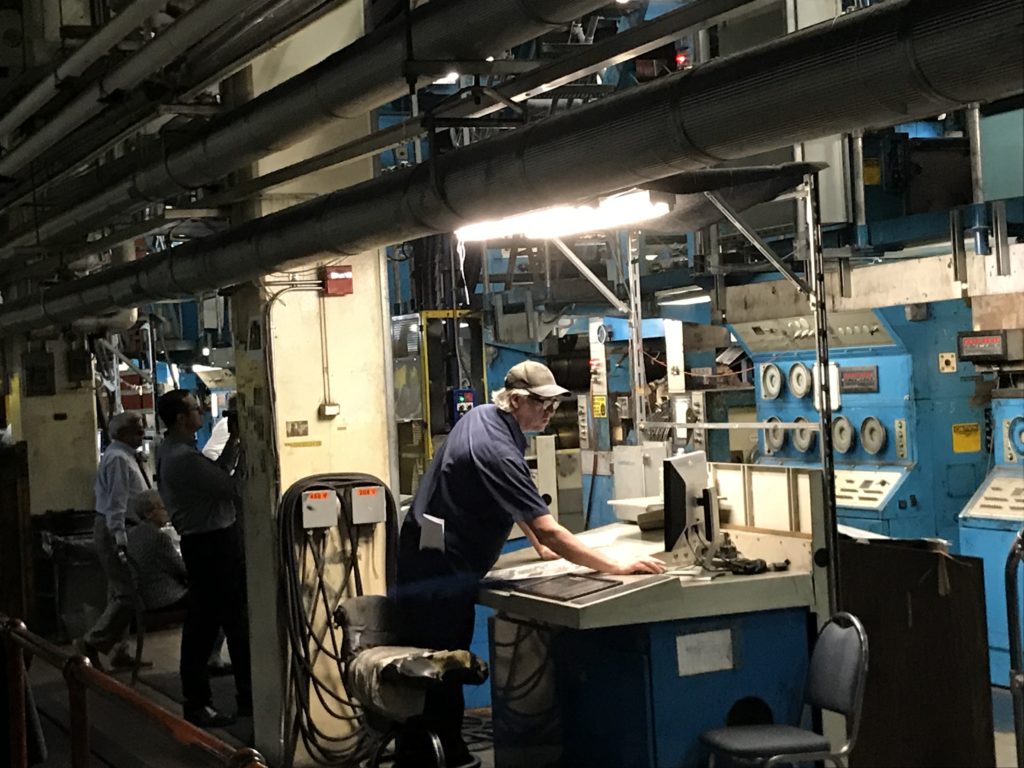 The last press run at The Vindicator on August 31, 2019 (Photo by Charles Sennott/GroundTruth)

YOUNGSTOWN, Ohio – It was the final press run at The Vindicator, the family-owned newspaper that served this town for the last 150 years. The moment felt like a somber family gathering around an aging and ailing loved one about to take a last breath.

With the staff of “The Vindy,” as it is known here, standing vigil inside the cavernous plant last Friday, the presses churned with a steady thumping. The weave of paper and ink flowed through the press rolls until it all started to slow and the final bells rang.

Slowly, the patient’s heartbeat grew faint, and then flatlined.

This was the death of a great American newspaper in a gritty American city that will not be the same without it.

Sadly, this is a recurring story around the country, as some 1,800 news organizations have shut down in the last 15 years, leaving 1,300 communities without any news source to cover their community. Hundreds more have seen their staffs gutted, creating “ghost newsrooms,” according to research by the University of North Carolina’s School of Media and Journalism.

This crisis in local journalism is contributing to the crisis in our democracy, and has everything to do with why we launched Report for America. We are putting out a call to news organizations – newspapers, public radio stations and digital news organizations alike – to apply to join our movement to host emerging journalists to serve under-covered communities through local reporting.

Standing among the staff and their families in the printing plant was the legendary Bertram de Souza, who worked at the paper for 40 years taking on corrupt politicians and organized crime and most recently as Editorial Page Editor; the Managing Editor Mark Sweetwood, who is straight out of central casting for the gruff and brutally honest editor of a city newsroom. And capturing the moment on his iPhone was the paper’s Editor Todd Franko. He looked at some of the 140 employees and their families gathered in the printing plant and shook his head, saying, “What happens to a city when it loses its watchdog? I guess the only thing we can say is that we are going to find out. And I think this city is going to realize it has lost a lot.”

Youngstown has lost The Vindicator, but Report for America has gained a new team leader in Franko, who will be working as the Director of Local Sustainability and Development. He will be reaching out to newsrooms and emerging journalists to encourage them to join our movement to restore journalism from the ground up.

Standing along the conveyor belt, carefully going through the freshly printed copies of a commemorative edition of the newspaper, was Mark Brown, the General Manager. His family has owned the paper for the last 132 of its 150 years. His father died in 1981, leaving he and his mother to run the family business. An intensely private person who kept national media and television crews out of the last press run despite many requests, Brown was there with his mother Betty.

He did not provide any last statement to the staff, as that is not his style. But he did offer some time to talk one-on-one and to share that the hardest part of this very hard day was knowing 140 employees of the newspaper will be added to the long list of lost jobs in Youngstown in recent decades as the steel manufacturing has mostly vanished and a large General Motors plant shut down last year, taking 1,000 jobs along with it. In an interview for an upcoming episode of the GroundTruth Podcast he shared his thoughts on the closure of The Vindicator.
“It’s a very sad day,” said Brown, as the presses began to slow down near the end of the final run. “To see the press winding down is hard. You won’t have the sight and sound or the smell of the paper going through the presses. It’s a very sad time to know this is the last run.”

Asked what might become of his city without his newspaper, he replied, “We’re concerned. We provided a breadth and depth of coverage that no one else has been able to match […] We’re hopeful that the new (Youngstown) edition from the Warren Tribune Chronicle will do a good job. But they are saying they will not be able to match what we’ve done.”

The Tribune Chronicle purchased The Vindicator’s subscription list and will seek to fill the enormous void created by the death of the city newspaper.

A partnership between McClatchy and the Google News Initiative, known as The Compass Experiment, will launch a local news website called Mahoning Matters to cover Youngstown. According to their announcement, the venture will be 100 percent operated by McClatchy and will have complete editorial control. Two of The Vindicator’s top , young reporters, Jessica Hardin and Justin Dennis, are joining this venture along with Sweetwood who will serve as editor.

The Brown family also owns a local television station, and he vowed to step up local coverage on TV, but  conceded that will be hard without the staff of The Vindicator. Brown hastened to add, “TV is a different medium, a different product that is delivered. Not the same as newspapers, not the same number of stories or the depth of the stories.”

“So there is a real concern about the way the politicians will behave in the future, and what local government and school boards will be doing,” he added.

Asked about the demise of local newspapers in America, Brown said, “I believe it is a crisis for our democracy… If you want to have an educated citizenry to make good decisions on government … There was a time when we had a reporter or stringer in every township trustee meeting, board of education and every zoning board. I think that resulted in a stronger government. You had more checks and balances that are missing now […] I think the public generally appreciates what we did in those checks and balances. I think they are starting to get an inkling now.”

“It’s just a sad commentary on what has happened to our society … The internet has brought us many wonderful things, and countless doors it has opened and made life easier in many ways . But an unintended consequence of social media and Google and YouTube is that people spend so much time on those platforms and they don’t really spend time interacting with one another. They also don’t spend time reading. They don’t really read news any more […] They read a headline and a little snippet and think they know what it is about and they really have no idea. That is the sad and scary part. It is not good for our democracy and our country in the long run. You have to have a common set of facts, and newspapers were a large part of delivering that. Without them, I am fearful of where the discussions will go. We’re already off the rails in the Trump era, where anything he doesn’t agree with is labeled ‘fake news.’”

As the press run slowed to a stop, he pulled a freshly printed paper off of the conveyor belt. He held up the last edition for inspection and pointed out that for this last run, they returned to the original name of the paper, The Youngstown Vindicator, and his voice shook just a bit as he  read the banner headline across the top of the fold: “The End of Our Story.”

He confessed that the headline brought on a lot of emotions, saying, “We teared up, but it fit and it is accurate. We’re not going to be around anymore.”