As last of Georgia ballots are counted, a look at how voter turnout hit record high 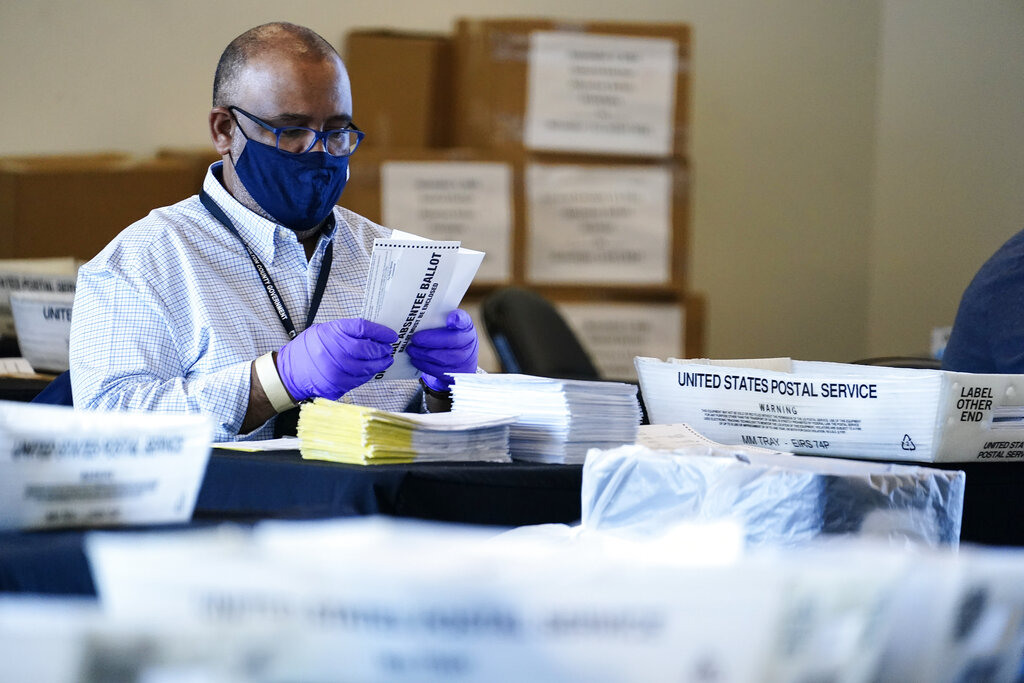 An election inspector looks at an absentee ballot as vote counting in the general election continues at State Farm Arena, Wednesday, Nov. 4, 2020, in Atlanta. (Photo by Brynn Anderson/AP Photo)

ATLANTA – After just under 5 million Georgians cast their vote in this election, the state’s voter turnout reached an all-time high. However, voter disenfranchisement in Georgia continues in a parallel surge.

At the start of early-in person voting, some of the state’s polling precincts experienced wait times of up to eight hours, last-minute polling precinct changes. Leading up to Election Day, many of these same issues persisted in addition to weaponized misinformation.

Georgia’s final calculations could take several more days as one county encounters a system error, and others work around the clock to tally the final votes. Right now, the margin between presidential candidates is less than 1%, the lowest margin in the country, illustrating the massive engagement of Georgia’s voters. The work of voting rights advocates and organizers remains on display. Georgia’s 16 electoral college votes and the state’s two Senate races now heading to run-offs represent organizers’ efforts to make the state’s elections more accessible.

“Voting rights is often on the back burner, but Georgia shifted that in 2018,” says Hillary Holley, organizing director at Fair Fight, one of Georgia’s largest voting rights advocacy organizations. This focal shift is largely responsible for Georgia’s current position as a key swing state in the 2020 presidential election.

In 2018, Georgia held its gubernatorial election between then Secretary of State Brian Kemp and Stacey Abrams, founder of Fair Fight. In the months leading up to the election, instances of voter suppression were plentiful. These instances took the form of voting roll purges by the hundreds of thousands, exact match laws that denied absentee ballot registrations disproportionately for minority voters, polling location closers and much more.

“What that did was create a massive multi-issue coalition,” says Holley.

This unofficial coalition, made up of legal organizations, reproductive justice groups, voter advocacy groups and other social justice organizations throughout the state, countered attacks with massive voter outreach. They met voters where they were and reimagined voter engagement. Instead of simply encouraging voters to get out the vote on Election Day, this coalition sought to educate voters and promote civic engagement all year round.

“Taking out ads on local radio stations, using social media graphics, direct mail often, working with communities where they are to say, ‘What can we do?’ It’s getting creative,” says Holley.

This creative approach aims to educate voters on their rights. The thought being, if a voter knows the ins and outs of the election process, the likelihood of disenfranchisement shrinks dramatically, Holley says.

However, meeting voters where they are can be challenging across Georgia’s 159 counties – the second highest number of counties of any state. This makes local election oversight difficult, as demonstrated through county poll closures that can be hard to track. However, through this coalition, voting rights advocates can cast their net wide to address these cases as they present themselves.

Still, members of the coalition do not always have outright victories, and many laws and practices that can suppress the vote still stand, but with crucial caveats that make their impact less harmful to voters.

The needle is moving in Georgia. The state’s demographics are changing, and the once entrenched conservative political ideology of the state is diversifying. Georgia’s progress and voting rights expansion is the result of the tenacity of the state’s voting rights organizers. Their victories are not stopping points; instead, their successes encourage them to think bigger and expand further, making Georgia a critical battleground state for this election and elections to come.

For example, after continued pressure from voting rights advocates, Georgia purchased new voting machines in 2019 after using a system that was 17 years old and fraught with technical issues ranging from vote flipping to general breakdowns. While there are still many concerns about this voting machine, Holley says it still indicates progress.

“It’s a step in the right direction to at least get the state to acknowledge that our election equipment is completely outdated,” says Holley.

Voting rights groups and the Democratic Party of Georgia also gained a victory in their challenging of Georgia’s exact match laws. While signatures, spellings and other discrepancies in voter documents are flagged, Georgia is now required to give notices to voters before outright rejecting the applications.

Holley is looking ahead, past this monumental election, “Even if we get this big win for voting rights and gain power, the right to vote and people’s voices being heard must continue to matter,” she says. “We have to continue addressing the issue and expanding voting rights immediately.”