ON THE GROUND IN PORTLAND, ME

As COVID-19 surges, public trust in health officials lessens the impact in Maine 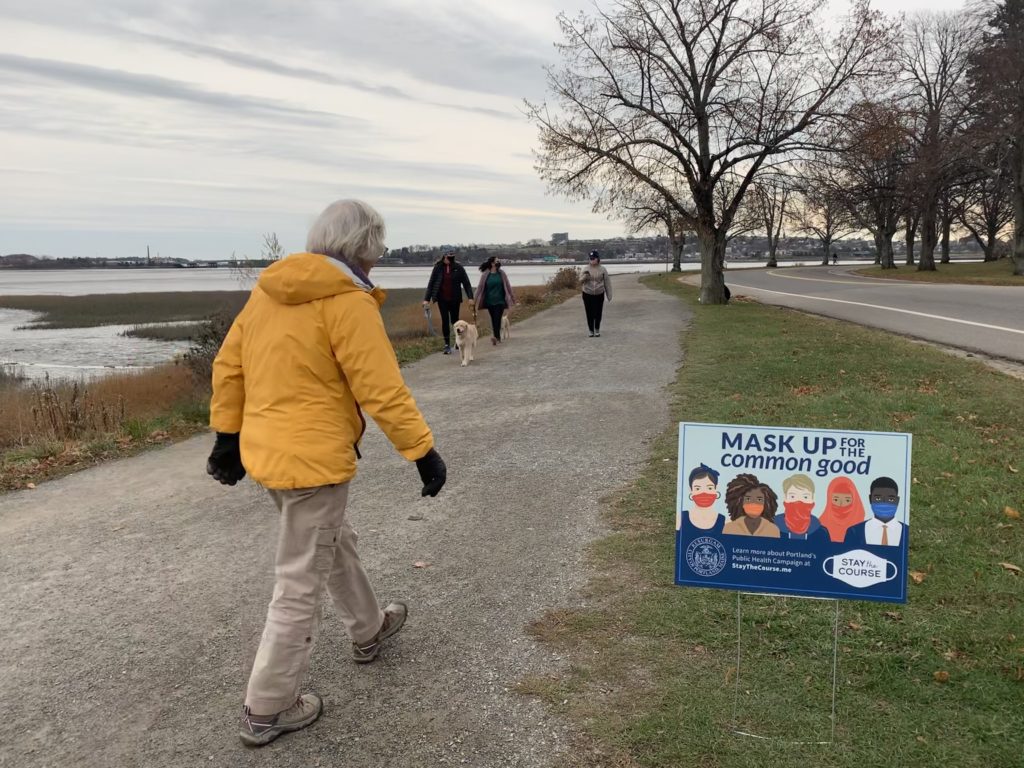 Signs posted along walking paths around Back Cove in Portland encourage Mainers to “mask up for the common good.” Masked walkers and joggers far outnumber those who don’t wear masks. (Photo by Rose Lundy)

PORTLAND, Maine — Flickering yellow letters on an electronic highway sign greeted me as I drove into Maine, my new home, for the first time in late June. Installed along Interstate 95, the signs conveyed pithy messages with a singular sentiment: “mask up” to fight COVID-19.

Throughout the summer, Maine frequently ranked among the nation’s most successful responses to the coronavirus. As cases surged in the South and then the Midwest, Maine felt like a pocket of safety and relative normality where new daily COVID-19 cases hovered around 20.

That sense of security deteriorated throughout November as daily cases and deaths repeatedly surpassed previous records, sometimes multiple times in the same week. In November, 67 Mainers died, accounting for nearly a third of the state’s COVID-19 deaths up to that point. And 551 new cases were reported on Dec. 16, shattering previous one-day records that had remained in the double-digits until October. Gov. Janet Mills even had to quarantine after a possible exposure until she received a negative test a few days later.

The rising numbers are alarming and have prompted urgent calls from state health officials to stay focused on curbing the virus as we deal with a “surge on top of a surge.” But even as cases spike, Maine remains one of the best-situated states, which officials say is due, at least in part, to early restrictions and public compliance.

“Our numbers aren’t nearly as bad as certain states that didn’t impose restrictions,” Gov. Mills said during a November press briefing. “(Other governors now are) taking a lot of measures, some of which we took months ago, because their numbers are off the charts, even worse than ours.”

While driving cross-country from the Pacific Northwest to New England early in the pandemic, I witnessed a variety of state responses to COVID-19. Maine made an early impression for widespread mask use and general acceptance of imposed restrictions.

That’s not to say there’s no frustration with a crippled tourism season, curtailed religious gatherings and struggling small businesses. Late October rallies opposing mask mandates attracted dozens in Maine’s most populous cities and few attendees at a late October rally for President Donald Trump seemed to be wearing masks. An August wedding where attendees didn’t wear masks and exceeded restrictions on gatherings has been tied to 177 cases, seven hospitalizations and seven deaths. But when I read about other parts of the country, life seems different in Maine.

Compared to the rest of the country, Maine is doing relatively well based on metrics that four local public health experts told The Maine Monitor they use to track the state’s COVID-19 response. On Dec. 16, Maine’s rate of new daily cases was 28.8 per 100,000 people — higher only than Hawaii, Vermont, Puerto Rico and the Northern Mariana Islands, according to COVID Act Now. The state with the highest rate, Tennessee, recorded nearly 116 cases per 100,000 people.

While Maine hospitalizations are at their peak, ICU bed use remains below capacity. And Maine’s test positivity rate — a measurement of how much a state is testing and therefore whether its number of confirmed cases is reliable — has been climbing higher in recent weeks but has  remained below the 5% level recommended by the World Health Organization.

However, Maine has struggled with at least one glaring failure. In June, Black Mainers accounted for nearly 28% of COVID-19 cases while only accounting for 1.4% of the state’s population — the nation’s worst racial disparity. By December, the gap had closed significantly but Black residents still made up 9% of cases. Non-white Mainers make up about 5% of the state’s population but 22% of COVID-19 cases. Officials have repeatedly called this disparity “unacceptable.”

In October, just before cases started to spike, Dr. Nirav Shah, director of the Maine Center for Disease Control and Prevention, attributed Maine’s low numbers to a general faith in science and public health officials. There are reasons to think this may be true. At a time when national public health figures face attacks, a Facebook page called “Fans of Dr. Nirav Shah (Maine)” has garnered more than 37,000 members and supporters started selling T-shirts with phrases like “In Dr. Nirav Shah we trust.”

In Aroostook County, which went for Trump in the national election by 20 percentage points, a Facebook group with 8,000 members dedicated to sharing COVID-19 information almost exclusively posts updates from the CDC and the nearby state university. Mainers Against Mask Mandates, the largest organized opposition group on Facebook, has 2,000 members and leaders insist they aren’t anti-mask. Rather, they don’t think they should be told they have to wear a mask.

Masks are the norm — from urban farmers markets and food banks to rural elementary schools and voting booths — and social pressure to mask up has only grown during my months here.

Even those who insist in interviews that they aren’t worried about getting COVID-19 are quick to assure me that they wear a mask and stay away from other people out of respect.

While wearing a face covering seemed less political in Maine this summer than in other parts of the U.S., as the pandemic rages on there are signs that fatigue and frustration has grown. State GOP lawmakers have objected to the Democratic governor’s mask mandate and restrictions on gatherings, and a group of anti-mask protesters confronted state lawmakers in early December as they walked into the Augusta Civic Center to be sworn in. During a recent radio interview, callers peppered Gov. Mills with concerns about fewer precautions taken in rural areas and lax enforcement of safety measures.

The Maine CDC on Dec. 7 announced it had to make some “unpalatable choices” to curtail some of its contact tracing to keep up with surging cases. But when asked where in the country COVID-19 is more concerning than in Maine, Shah responded, “More concerning? Pretty much everywhere. Less concerning? Prince Edward Island.”

Shah elaborated that the pandemic is bad everywhere but the national numbers are far worse than Maine’s numbers.

Rose Lundy covers the coronavirus for The Maine Monitor. This dispatch is part of a series called “On the Ground” with Report for America, an initiative of The GroundTruth Project. Follow her on Twitter: @RoseLundyyy.