The art of the American political narrative 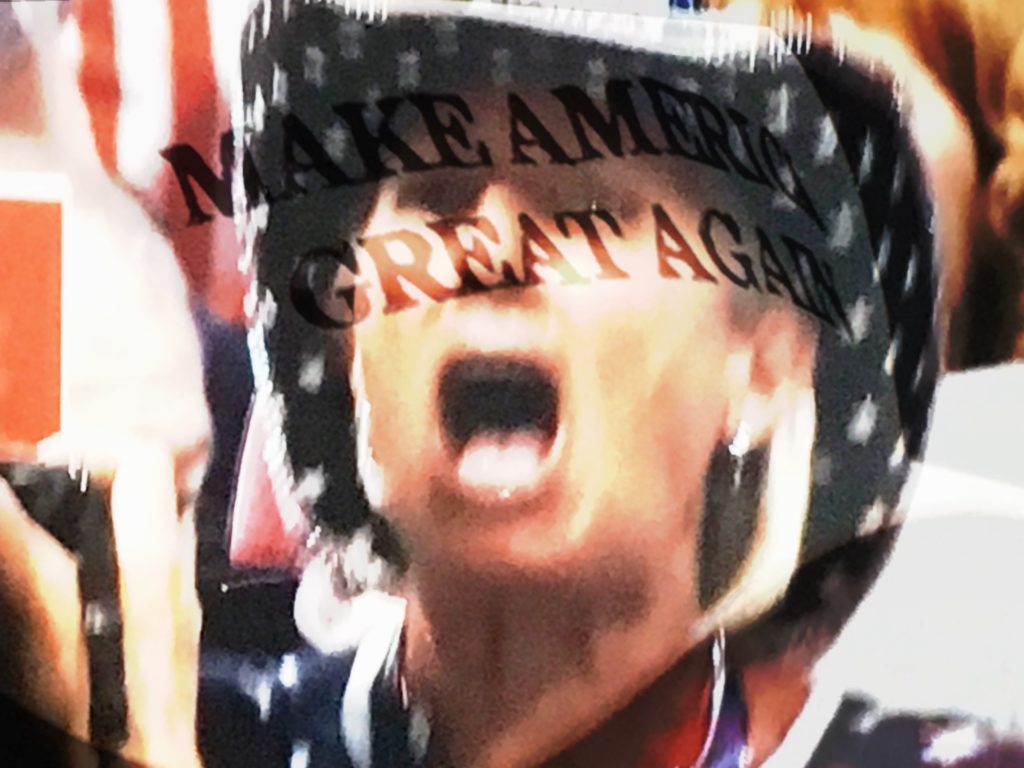 An attendee watches the speeches at the RNC. (Composite image by Biz Herman/GroundTruth)

Watching the conventions for the two major American political parties – the Republicans in Cleveland and the Democrats in Philadelphia – it struck me that the speakers could have been talking about entirely different countries.

The visions of America expressed at each convention were starkly different in substance, affect and vision for the future. But I wanted to better understand how, precisely, they differed.

As a journalist and documentary photographer now pursuing a Ph.D. in political science at UC Berkeley, I conducted a quantitative text analysis of the speeches given at each gathering, pairing them with images I created by layering photographs of television coverage of the events.

Quantitative text analysis allows for the systematic scrutiny of bodies of texts, often revealing patterns inaccessible to the human eye due to bias or inability to process such large quantities of information.

Using topic modeling analysis, which looks for patterns within a group of documents, the topics and their keywords discussed at each the RNC and the DNC are isolated and illustrated as word clouds below.

The RNC topics tend more toward fear and threats, with many focusing on violence, terrorism and the nation’s enemies. Notably absent is substantive variation; when compared to the DNC’s themes, which cover various issues such as gun violence, social justice, climate change and working wages, the RNC topics tend to center more on emotional appeals and general discussions about the role of government, the perils facing the country and national identity — a pattern reflected in the imagery of the convention, as well.

The DNC topics have a wider cross-section of identities represented, with different races, genders and ethnicities discussed throughout. Families and children are highlighted across multiple themes, and more emphasis is placed on specific individuals and issues.

As expected, each party paints its own candidate in a positive light and underscores the other’s shortcomings. The DNC speeches highlight Hillary Clinton’s historic nomination and emphasize her strength, years of experience and public service in support of children and families. The RNC topic on Clinton focuses on Benghazi, terrorism and the FBI investigation of her emails.

With Donald Trump, the RNC rhetoric focuses on his projected strength and his work as a businessman, emphasizing his promises of greatness, borders, toughness and great deals. The DNC speakers instead accentuate his inflammatory rhetoric regarding minority groups, the fraudulence of Trump University and the divisions he has engendered in the Republican party and the country.

Similar patterns can be seen on topics ranging from the role of the commander-in-chief, to familial structures, business development, party identity and violence.

Among words used by both candidates in their speeches, Trump tended more toward words with negative valence – violence, terrorism, failed, killed – or the points of emphasis he has relied on throughout his campaign – deals, trade, immigration and enforcement. Clinton’s emphases were on identity-focused words – veterans, children, students, women – as well as substantive and creation-oriented themes, including energy, reform, program, create, progress, security, power, allies and college. The most commonly used words for each speech are visualized in the word clouds below.

In a recent piece on Trump supporters in The New Yorker, George Saunders writes on how Americans now inhabit two countries, LeftLand and RightLand. He highlights how the same facts can be taken and framed in different ways to support seemingly contradictory arguments, so even if information is not fabricated, individuals can camp out in their respective viewpoints. And when liberties are taken with facts, then the possibilities for the width of the chasm between the two countries is virtually limitless.

Yet, in the midst of all the messaging and reporting of the political conventions – in many ways, the ultimate manifestations of these two nations in which we now live – was the speech of Khizr Khan at the DNC, joined onstage by his wife Ghazala Khan, that captured the country’s attention. His address, a mere 362 words, as opposed to Hillary Clinton’s 5,326 or Donald Trump’s 10,318, dominated the news cycle for the majority of the last week.

Perhaps the national fascination and admiration of the Khans is rooted in their potential to be a powerful bridge for these two narratives, embodying the deep patriotism that has in recent years been touted by the right and the American immigrant dream that has been associated with the left.

Indeed, the Republican nominee has given Democrats the gift of being able to express love for country, which for decades had been a hallmark of the Republican Party, in their protection of the nation against the threat they believe Trump poses.

Facing a common enemy, Democrats have found themselves as the new party of conservatism of American little-d democratic ideals, while advancing one of the most progressive platforms seen by a major party in American history.

On the other side, Trump has flamed an ember of fear and anger that has been long stoked and cultivated. Written about and documented by many, this fear predominates in white America – a feeling of being attacked from all sides. Undocumented immigrants, Islamic extremism, establishment politics, media bias, racial tensions and violent crime all serve as threats looming just beyond the front door.

Yet, in identifying everything as the the enemy, as illustrated in the RNC topic clouds above, Trump has lost the force of effective mobilizing in opposition to a single adversary. Collective tragedy has the power to unite and spur to action, as has been the case in responding to past disasters, whether natural, such as Hurricane Sandy, or man-made, as with 9/11.

But amorphous danger and personal vendettas tend to lead to an unfocused and at times out-of-control base. The anger ignited long before Trump came to the fore – part of a long narrative of a feeling of the loss of American identity by political correctness, stoked and constructed for years by a selective outrage machine, and encouraged by Trump in a way that ignores the coded language that his predecessors had opted for – has now taken shape in the form of vitriol and violence not seen in any recent election.

Biz Herman is a freelance journalist and Ph.D. student in Political Science at UC Berkeley. She was previously a GroundTruth reporting fellow in Egypt and in Bosnia. All data and code used in this analysis can be found online here. Developed using code from Rochelle Terman’s PS239T course, taught at UC Berkeley in Fall 2015. Github repository available here.