Climate change looms as a long-term threat to aquaculture 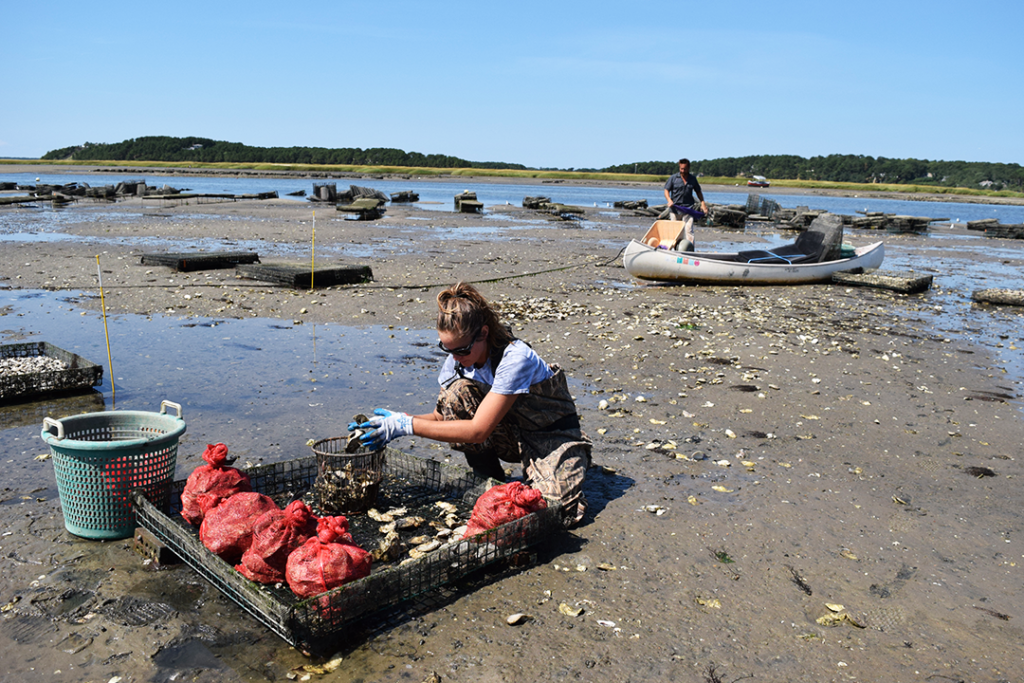 This is the third of the three-part series, Indicator Species: New England Fishermen and the Challenges of Climate Change.  You can find part one here and part two here.

Aquaculture is on the rise in Massachusetts.  For many entering the business, shellfish farming seems like a more secure option than the marine fisheries.  But climate change looms as a long-term threat over the industry.

Paul Wittenstein always wanted to be a commercial fisherman.

Growing up in Harwich, he worked summer jobs at fish markets and on chartered fishing boats. In college, he started out studying fisheries technology, but it was a bad time for the industry. “All the while I was in school, I was watching the fishing industry struggling,” he said.  “I watched the cod disappear. I watched small boats battling big boats. At the same time, I saw this tiny little shellfish industry start to take hold.”

For Wittenstein, the signs were clear. He switched his focus to shellfish farming, and he’s now general manager at the Aquacultural Research Corporation (ARC) in Dennis. It’s one of the leading seed suppliers in the region, and it spawns millions of oysters and clams each year.

Ten years ago, the Massachusetts shellfish industry was worth $6.2 million. Since then, its worth has quadrupled, to over $28 million.

But concerns over climate change make the future of aquaculture look less certain.

Scientists say that the Gulf of Maine, which stretches from Cape Cod to Nova Scotia, is warming faster than 99% of the world’s oceans. The water is a mix of warmer water that comes from the south, and cooler water that comes from the north. Climate change causes the ice in the Arctic to melt, which causes the currents that bring the mix of water to the Gulf of Maine to change.

Daniel McCorkle, a scientist at the Woods Hole Oceanographic Institution, says the warming water coming up from the South opens the door for more illnesses that affect shellfish and the humans that eat them.

Massachusetts keeps a close eye on shellfish, and shuts down growing areas when they’re contaminated. But the changing environment makes it harder to predict and manage.

And while that’s happening, the colder water coming down from the north brings another threat: ocean acidification. Colder water holds more carbon dioxide, which makes it more acidic. When pH drops to a certain point, the acidic water starts to destroy corals and shells.

Lisa Bourassa manages the shellfish hatchery at ARC, and she monitors this issue closely. “It will become a problem in the future,” she said. “Especially as CO2 emissions are expected to continue to increase.”

All these changes have the potential to affect Jason Weisman and his wife Elizabeth, who tend a shellfish grant in Wellfleet. In early fall, at the height of the growing season, the whole mudflat was dotted with thriving oysters, fattening up for the winter. “There is so much food in the water, and they’re growing so fast we can barely keep up,” he said.

The Weismans started the farm in 2014, and it’s just the two of them running it. They’re out on the mudflats every day, sorting and bagging oyster seed, building and maintaining equipment. They harvest and run their own deliveries. They host raw bars and farm tours.“So when we’re talking about global warming and ocean acidification, it’s a variable that we try to deal with, without thinking the whole world’s going to collapse in a day,” says Weisman. “That’s the only way we’ll get something done.”

Weisman was a commercial fisherman before he switched to oyster farming. He says it’s been the right choice for him and his family.

He hopes the big impacts of climate change, for aquaculture, are still far in the future.