ON THE GROUND IN CINCINNATI, OH

Anatomy of an Election: Northern Kentucky ousted a Republican governor in 2019. What could it mean for 2020? 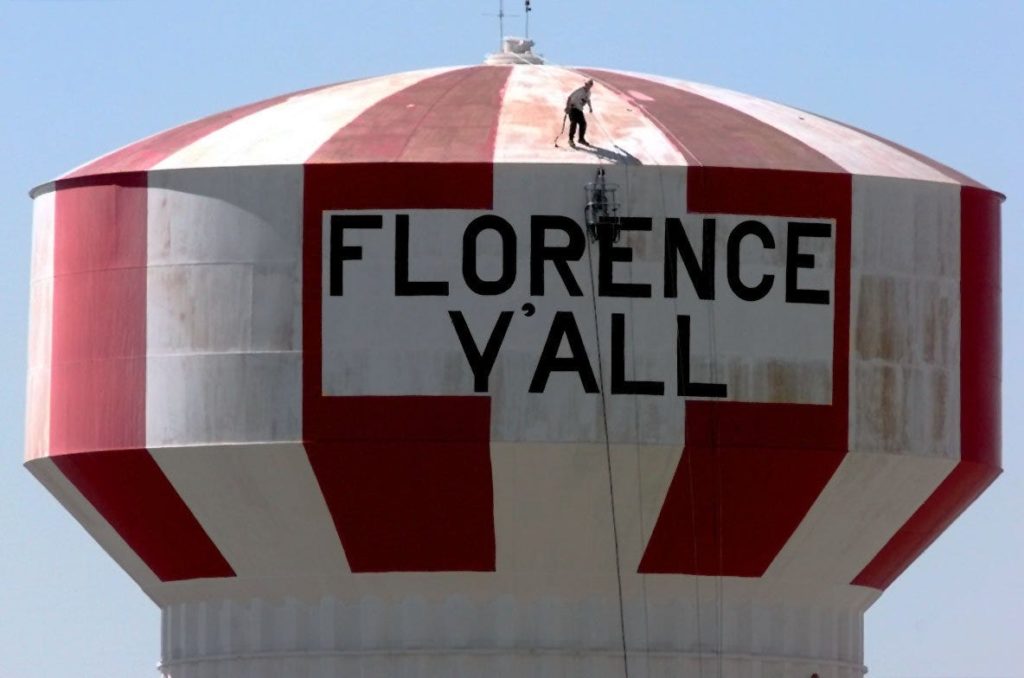 The iconic "Florence Y'all" water tower in the Northern Kentucky city of Florence. The tower can be seen from Interstate 471 running through the region. (Photo by the Enquirer)

CINCINNATI, OH – I had just swallowed a mouthful of spicy lo mein noodles at my desk when the Kentucky Board of Elections map flickered, and Kenton County took on a blue hue.

It was Nov. 5, and the results of Kentucky’s 2019 gubernatorial race were trickling in. It’s my job to watch Northern Kentucky. I thought I knew the region pretty well but I was soon reminded of journalism’s golden rule: assume nothing.

The three counties I cover – Boone, Kenton and Cambell – were sure to vote for the Republican candidate. That’s what voters did when Senator Mitch McConnell won his 2014 election, when former Gov. Matt Bevin won the state in 2015, when President Trump was elected by a 32-point margin in 2016 and when Congressman Thomas Massie won in 2018.

The conservative streak runs through the statehouse, too. There are nine house members and four senate members who represent the three counties in the Kentucky General Assembly. Only one of them, a member of the house, is a democrat.

When blue appeared on the map in the middle of my screen, I knew we were in for a story.  A quick search in The Enquirer archives showed that Boone, Kenton and Campbell had last flipped from red to blue in 2007 and 2011, when Governor Andy Beshear’s father, Steve Beshear, won the gubernatorial election.

My editor was across the newsroom focused on his own eggroll when I said something that got his attention: Kenton County flipped from its historic red to blue. And so did Campbell County. Boone was still red. The gubernatorial race turned two counties democratic, a trend that carried the night to unseat the incumbent Republican Matt Bevin and elevate Democrat Andy Beshear to the governor’s mansion. It helped Beshear win the state by less than 1%, which made me wonder how each Northern Kentucky vote would influence the 2020 elections.

I opened a file and began to report my findings.

The breaking news of the counties’ flip to blue was part of a larger picture that showed how and why the state ousted former Republican Gov. Matt Bevin, who lost the election by 5,136 votes. Experts argued that couldn’t have happened without the region, in which three counties are comprised of about 400,000 people. People were paying attention to Northern Kentucky.

It takes about 30 minutes to drive from easterly Boone County, one of the fastest growing in the state, to Campbell County in the west. The construction of the new Amazon Airhub near the international airport can be seen from the highway, as the famous red and white “Florence Ya’ll” water tower whizzes by. Once the road crosses into Kenton County, rural farms are replaced by suburbs which are replaced by urban cores like Covington, Northern Kentucky’s largest city, where new businesses have flocked in recent years. Campbell County, the smallest of the three, is home to Bellevue, Newport, Fort Thomas and Dayton, all of which populate the Ohio River riverfront.

It’s a vast region that can, and did, influence an election, despite having one of the lowest voter turnout rates in the state. But between January and October of last year, about 6,000 additional Northern Kentuckians from the counties of Boone, Kenton and Campbell registered to vote, according to state registration data. I wanted to uncover why.

Since 1999, gubernatorial turnout in the region has averaged about four to five percentage points behind the state average, as reported by The Enquirer. On the night of the gubernatorial election, though, voter turnout increased by double digits in all three counties, possibly due to a local campaign by the region’s Chamber of Commerce, or because people here strongly disliked Bevin, his policies and his attitude (he lost the most support here, according to an analysis by The Enquirer). Despite losing Kenton and Campbell counties, Bevin won in conservative Boone County, where his support still dropped 9.5 percentage points from 2015 –  more than in any other county.

Voter turnout in Northern Kentucky was up. When asked why it had been so low before, experts blamed costly cable ads. Bevin’s campaign spent $11,000 on 65 30-second airwave slots in October 2019. Those ads are the most expensive in the state because the cable channels are based in Cincinnati, Ohio, and are broadcast out to Northern Kentucky across the Ohio River. So Kentucky candidates have to buy Ohio metropolitan-priced cable ads to reach viewers in Northern Kentucky causing campaign managers to invest elsewhere, like Louisville or Lexington.

Former Secretary of State Trey Grayson and others told The Enquirer that, for this reason, the media was partly to blame for the turnout decline. In addition to fewer reporters covering the region, residents were underexposed to candidate ads and this resulted in less overall electoral interest, an example of how shrinking news coverage impacts voter turnout.

Residents used to depend on The Enquirer and The Cincinnati Post, which had a joint operating agreement until 2007, when The Enquirer didn’t renew the agreement and The Cincinnati Post folded. That left the Enquirer’s approximate 10-person Northern Kentucky bureau to cover the region’s three counties. In 2013, that bureau closed. When I started reporting on the region, community members told me how much they missed that volume of Northern Kentucky journalism.

Issues that drove voters to act

But candidate Matt Bevin faced adversity in Kentucky for a litany of reasons, including a controversial Bowling Green radio interview in which he called  educators “selfish” and said they had a “thug mentality.” Campbell County Judge-Executive Steve Pendery told The Enquirer that Bevin’s unpopularity among teachers was a factor in why the newly-blue Campbell County voted for Beshear. Pendery lives in Fort Thomas, a conservative suburban city where Andy Beshear won 14 of 15 precincts there.

And the intra-state Ohio ads and newspapers weren’t the only Ohio-related issue that impacted Northern Kentucky residents during the election, whose fates are also intertwined over the Brent Spence Bridge — named for a longtime congressman from Kentucky — which connects Northern Kentucky and Ohio over the Ohio River.  With more than 180,000 cars crossing it every day, it is in sore need of replacement. The last time the bridge’s safety inspection got the equivalent of a B+ was 2006. In 2017, The Enquirer reported the Trump administration had the bridge project ranked No. 2 on its list of nationwide transportation priorities. Three years later, it remains in need of replacement.

The bridge was built with $10 million in federal money authorized by Congress and the Eisenhower Administration in the early 60s. Now, its estimated $2.6 billion replacement is largely the responsibility of both Ohio and Kentucky, where officials have said the bridge, which opened in 1963, is functionally obsolete as it carries nearly double the amount of traffic than it was intended for.

The bridge was a focal point for Northern Kentucky voters. In 2016, then-presidential candidate Donald Trump vowed, with a vague plan, to replace it. And residents lashed out when Bevin said tolls were the answer because that was a pivot away from the anti-toll stance he took when he won his first election in 2015. Andy Beshear, the Democratic candidate, never said if he was for or against the tolls.

The gubernatorial change meant different things for a bridge in desperate despair and more for the region that shares a river with Ohio. Northern Kentucky was taking on its newfound mantle, of unpredictability and density. What’s more, people started to ask what the gubernatorial race results would mean for the elections in 2020.

Would Mitch McConnell, the Senate majority leader, be reelected? What would happen to the congressional seat? And would President Trump win the Northern Kentucky counties, like he did in 2016?

Two Democratic candidates filed to run for the congressional seat that has been held by an incumbent Republican for seven years. A few Democratic Senate candidates filed to run against incumbent conservative Mitch McConnell, too. Democrats do that every time McConnell is up for reelection. But this time one of the candidates, Amy McGrath, is from Northern Kentucky. Another, Mike Broihier, held an early campaign event at the Hotel Covington, in Northern Kentucky.

I’ll be at my desk on Nov. 5, ready to tell our readers what happened and how, maybe over a plate of lo mein.