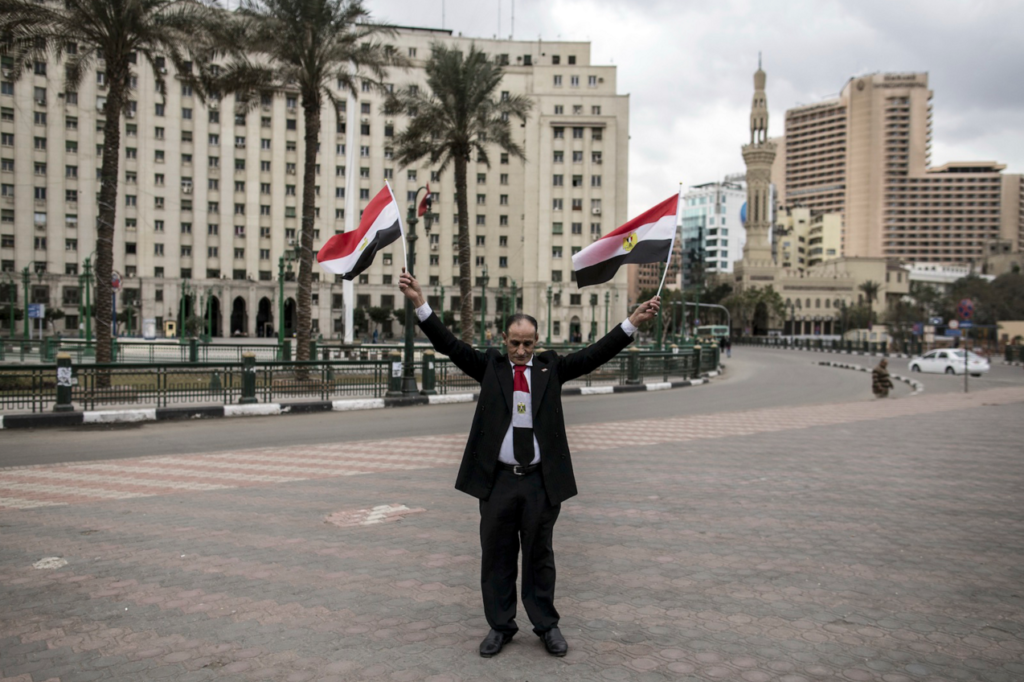 Five years after the fall of a dictator, Egypt faces echoes of the past

CAIRO — The Egyptian bazaar known as Khan El Khalili is sandwiched between two prominent mosques in Islamic Cairo. Both mosques carry a religious significance for Egyptian muslims in particular, and Muslims in general. Al Azhar, one of the mosques, is a seat of Sunni scholarship.

The market was, for a long time, a bustling beehive for Egyptian intellectuals. They’d gather there for hot tea or coffee and melon hookah before or after work. That’s no longer the case. But one thing that’s still around like a postcard from better days: the call to prayer in Islamic Cairo. It echoes through the narrow alleys of this street market and for a moment the world seems to stop.

That’s why people who live and work in the once gleaming intellectual hub are now lethargic. There’s a feeling of indifference between the shoddy cafes and the tired stalls selling plastic pyramids made in China. Beyond indifference, I’ve also noticed a sense of cruelty during an unusually cold winter. Visiting Cairo during my childhood years, I remember “God’s houses”— as they call the mosques — stopped opening their doors for the homeless. Former Egyptian President Hosni Mubarak’s administration ordered this policy in the early 1990s as he tightened his grip on Islamists.

And though there was a new spirit of welcome during the uprising, mosques today shut an hour after the last prayer of the day at around 8 pm. It’s hard to walk a block without finding some of the same people who marched for freedom, dignity and justice just five years ago now sleeping in dirt. Poverty is engrained in the framework of Cairo.

In Egypt, mosques have always been a frontline for power struggles between the government –those ostensibly in charge – and between the country’s Islamists. Egypt’s Islamists range on a spectrum.

Over the last few decades , controlling mosques has extended from unifying the “azan” call for prayer (2010) so that each mosque doesn’t have to have its own (think of a town full of churches where there’s only a singular bell that rings, eliminating any cacophony), mandating a unified Friday sermon (2014) to finally authorizing the imams before they deliver those sermons.

But the power struggle in Egypt – despite who’s in charge – has always ignored the poor.

Even Islamist groups seemingly opposed to the state like the Muslim Brotherhood, who used the mosques for congregation during Mubarak, did not change the 1990 Mubarak policy. The homeless could not also sleep inside.

Egypt’s poor have always been neglected, used as rallying cries for fights that don’t happen once those screaming are in power.

When the Brotherhood, who’ve long provided social services to the poor – strategically filling in where the state had failed – finally held power, they ignored the poor. Egypt’s economic policies that Mubarak helmed became the Brotherhood’s, but under a different name. The Al Nahda “Renaissance” project which was marketed as a democratic project to help enhance people’s lives, proved to be a project that benefited the wealthier in Egypt.

So when those left outside the “House of God” joined millions in once again calling for the downfall of the regime, the country once again pulsated with the demands of bread, freedom and dignity.

But the military regime that replaced it has once again followed previous administration’s playbooks: leave the poor outside the House of God, leave them suffering on the fringes in a country where an estimate of 40 percent of people do not know how to read.

So the poor join the disenfranchised ranks of others in Egypt: political “activists” who threaten Egypt’s veneer of stability, a crackdown on a press that threatens to hold a mirror up to the House of God.

So the era of silence continues. The era of forced forgetting continues.

There has been little or almost no discussion on how can the government help the homeless such as those now freezing in Khan El Kahlili, once a symbol of Egypt’s intellectual inquiry and cosmopolitan verve. There has been little or no discussion of people living under the poverty line in the slum area of Manshiet Nasr, which is now surrounded by high-end development complexes.

Two weeks ago I stood a few meters away from the Khan in Tahrir Square with my colleagues Lauren Bohn and Charles Sennott. We used to go there together, all deafened by the chants for bread, freedom and dignity. But on the fifth anniversary of an uprising that shook the country, all we could hear were cheers for the police and military – for the regime that constricts the distribution of bread, freedom and dignity. The cost of chanting otherwise is too high. You’re either with them or against them. You’re either a patriot or a traitor – an enemy of the state.

So when I met 60-year-old Fawzy Abdellatif that day in Tahrir, I wasn’t surprised he was there supporting the government. I wasn’t surprised that he was cheering for the president because “that is the right thing to do.” Even though Abdellatif hasn’t received his pension despite complaints to that very government, he still supports them Even though they restrict his dignity and limit his freedom, he still supports them.

“They put all the complaints in a pile and don’t look at them,” he laments while praising them in the same breath. “We live in danger, we live in a slum. I protested against The Brotherhood but still got nothing.”

That night on television, Ahmed Moussa – a pro-regime TV host who has spent his career defending the regime – reminded the country of they’re constantly forced to believe – a neverending breathing, living loop of propaganda:

“June 30 [the coup that ousted Muslim Brotherhood president Mohammed Morsi] has freed you [Egyptians] from the tyranny of The Brotherhood, meanwhile Jan 25th is what brought them in. So which one is the real revolution?”

His propaganda was challenged on Wednesday. Exactly five years after Mubarak stepped down, thousands of doctors protested against police brutality.

But this is a rare moment of protest, a last gasp of perseverance.

The rest of us are locked outside of the House of God.

But what is worse: we’ve all stopped knocking.

This article was edited by Lauren Bohn.