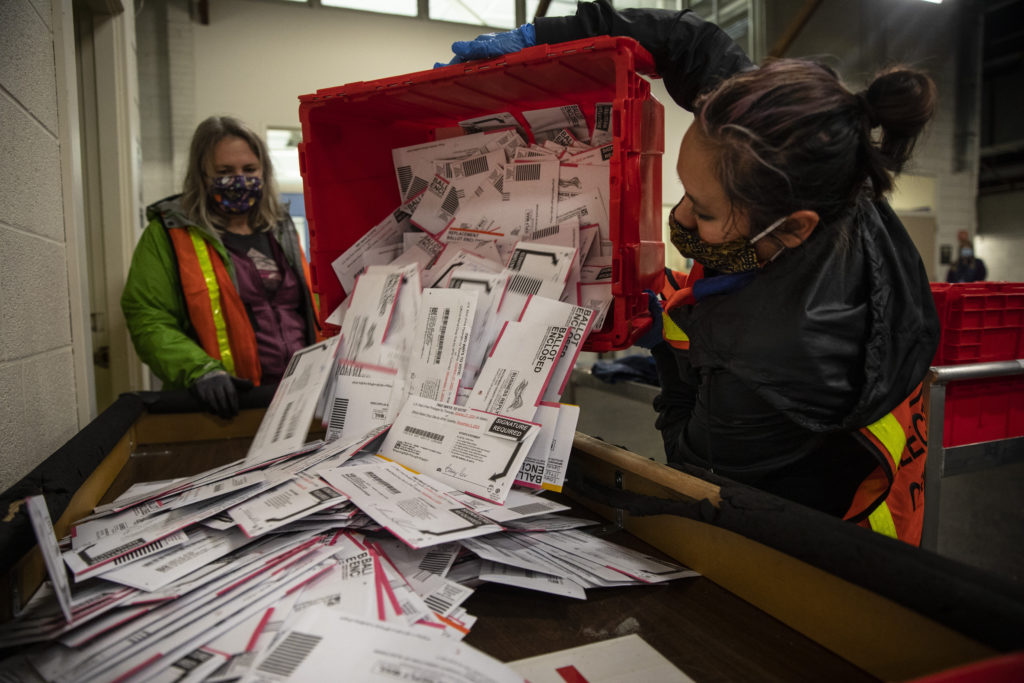 Election worker Kristen Mun from Portland empties ballots from a ballot box at the Multnomah County Elections Division, Tuesday, Nov. 3, 2020 in Portland, Ore. Oregon is the first state in the nation to institute voting by mail and automatic voter registration. (Photo by Paula Bronstein/AP Photo)

Election Day was the latest deadline to postmark a mail-in ballot in most states.

Despite lawsuits filed by civil rights groups and voters, five states – Texas, Louisiana, Tennessee, Indiana and Mississippi – never extended mail-in-voting to those voters concerned about contracting COVID-19. And after several back-and-forth provisions, Alabama, along with Virginia and Wisconsin, required voters to provide two witness signatures and a photo ID copy.

Just last week, the Supreme Court rejected attempts to extend the mail-in-ballot deadline in Wisconsin as the Trump administration unsuccessfully attempted to block such attempts in North Carolina and Pennsylvania, where 1.4 million mail ballots are still being counted as of Wednesday morning, according to the Secretary of State.

As of Nov. 3, about two thirds of the nation’s total early votes were cast by mail – nearly 64 million votes. As that complex vote-by-mail system plays out across the nation, election officials in Oregon — a state that has run 100% vote-by-mail elections since 1998 — uneasily watched history repeat itself.

“The politics that went into it were terribly ugly,” said current Linn County Clerk Pete Druckenmiller, who was election supervisor from 1984 to 1986, referring to the state’s early implementation of the system. “And we’re sort of seeing that happen now.”

Frustrated with the expense, inconvenience and low voter turnout in Oregon’s local elections, they set out to reconstruct the state’s electoral process.

Later that year, America’s first mail ballot was cast in a local election in Linn County, Oregon. Though the trial was immediately successful – with widespread voter approval and turnout soaring to over 75% – the state didn’t roll out voting at home right away, and instead played nearly 18 years of political football.

“We went through this 20 years ago,” said Priscilla Southwell, an academic expert in U.S. elections and professor of political science at the University of Oregon. “I am absolutely disturbed to see this happening during the most important election year of our lifetime.”

Despite a two decade-long track record of vote by mail in Oregon, and studies that prove its sustained success, states across America failed to implement default mail-in voting systems in this unprecedented election. While some states quickly overturned their election systems, others – beset by lawsuits, misinformation and false allegations of voter fraud – got stuck in the political mud.

“To rail against an increase of mail-in-balloting in states that have had it for years  – where Republicans were the biggest users of it – is really the height of inconsistency and disingenuousness,” said Phil Keisling, chair of the National Vote at Home Institute and Oregon’s former Secretary of State. “Voting at home is an imperative enfranchisement effort.”

Southwell began studying the impacts of vote-by-mail in the early ‘90s, with Oregon’s election officials in the midst of the highly politicized, two decade-long battle. In 1995, the Republican-run state legislature supported voting by mail, hoping it would boost turnout among older voters who tend to vote Republican.

The Democratic governor at the time opposed the idea, claiming the move was too radical and would ruin his re-election chances. But when the state ran a trial in 1996 during a special election for a replacement senator, a Democrat won. Suddenly, Democrats supported it and the Republican tradition of opposing mail-in voting was born.

But with emerging studies by Southwell and other academics, paired with lobbying by interest groups like the League of Women Voters, Oregon became a 100% vote-by-mail state by 1998.

In April, the National Vote at Home Institute, which advises election officials considering a shift to vote-by-mail, redoubled its efforts amid the pandemic and launched the VoteSafe coalition, a nonpartisan push to expand access to absentee ballots.

Among the many last minute mail-voting related decisions states faced was whether to require a voter to apply for a mail-in-ballot. Keisling calls it the “Shakespearean” vote-by-mail dilemma: “To have to apply or not to have to apply. That is the question.”

In Oregon, since 1998, every active registered voter is automatically mailed an absentee ballot. Going into the 2020 election, only four other states shared the policy: Colorado, Utah, Washington and Hawaii. After COVID-19 hit, California, Nevada, Vermont, Washington D.C. and most counties in Montana followed suit, not without battles and lawsuits.

That left 40 states stuck in what Keisling refers to as the old model.

“I would argue that while there have been tweaks and changes – some states have allowed postmarks to count, some states have altered deadlines or loosened excuse policies,” Keisling said. “But fundamentally, in the 40 states, the system is still the same as it was before.”

But Kesling, who is deemed one of the “parents” of America’s voting-by-mail system, is sympathetic to some states’ hesitation with a new system. Early in his term as Secretary of State, in the late ‘80s, he voted against a bill which would expand vote-by-mail. His argument, he said, was mostly sentimental.  “It was my education that eventually led to my epiphany,” he said. “I was confusing a particular and familiar ritual of democracy with its essence, which is participation.”

Before April 1, only eight states had run a primary or general election with more than half of its votes cast by mail in the history of American elections. But now, over 30 states have experience with the mail-in vote in the primaries, and analysts expect this trend to expand to most states for the general election.

“That’s sort of the threshold,” Keisling said. “Once you get over 50% you step back and say: ‘Wait, we’re running two elections here. We should have mailed every registered voter their ballot three weeks ago. The system speaks for itself.”

But Druckenmiller, the county clerk, says this is only the beginning of a reimagining of American elections

“Vote by mail is not the end-all,” he said. “There will be something after this. But the fundamental question will remain the same: Why are some making it so hard to vote?”

Megan Botel is a Poynter-Koch Media and Journalism Fellow with The GroundTruth Project.  Follow her on Twitter: @meg_botel.