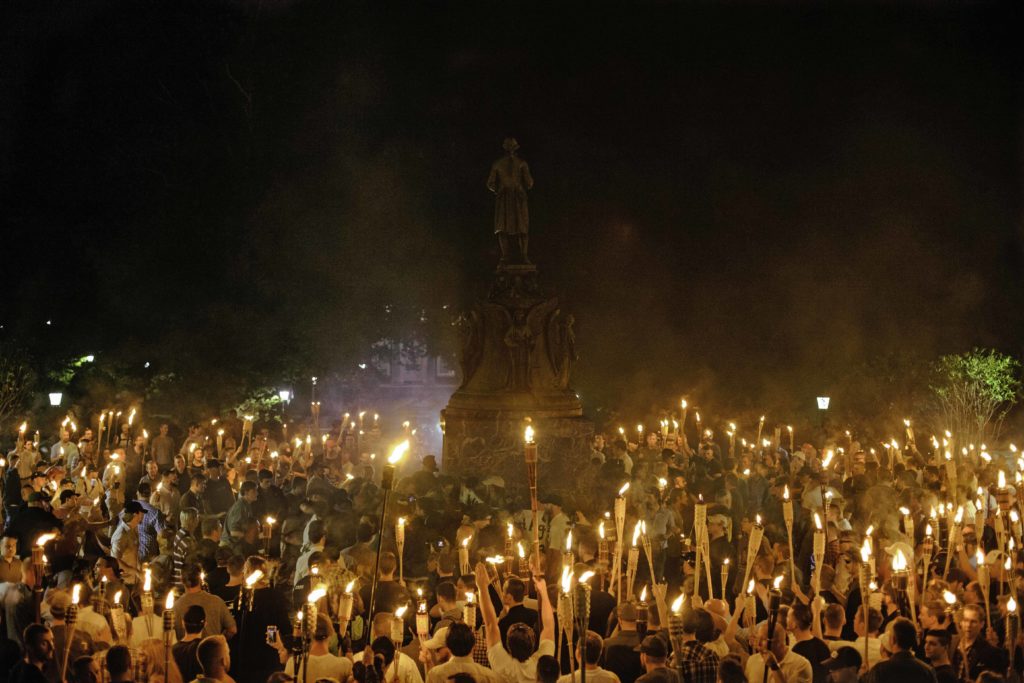 White supremacists marched to the Thomas Jefferson Memorial on the UVA campus. At the site, they were met by counter protesters who had planned on getting arrested for protesting against the white supremacists. August 11, 2017 Charlottesville, VA. (Shay Horse/GroundTruth)

I knew Charlottesville was going to be big. According to the Southern Poverty Law Center, the Unite the Right rally was going to be the biggest gathering of white supremacists in decades. But there was a slow burn leading to the torchlit night at the University of Virginia. Richard Spencer led a similar event back in May, so the inspiration was there for Jason Kessler, one of the main organizers of the Unite the Right rally. But even before Spencer’s event, there was Donald Trump. Trump has given a new confidence to the right-wing in the United States. This confidence has manifested itself as dozens of right-wing rallies in recent months.

When I found the torch-carrying marchers at Nameless Field on the UVA campus, they were only a few dozen strong, most only mumbled answers to my questions or calmly readied the torches. Their numbers grew as more khaki-clad men wandered into the field, and they became more brazen. “Which Jew media company do you work for?” they would tauntingly ask journalists on the scene.

As the group of tiki torch-wielding white supremacists grew larger, they began to organize. They had a team running protection, assigning men to the sides of the march and going over defensive tactics should they be attacked. Then they went into a full-blown frenzy. They began marching into the UVA campus chanting, “Jews will not replace us” and “Blood and soil,” the latter being a Nazi chant. They marched through the campus, their chanting growing louder and louder.

The UVA campus was partially designed by Thomas Jefferson. It has wide green spaces and white-columned buildings, giving the campus the feel of a Southern plantation. It made the hundreds of white men carrying torches all the more grotesque. These men were taking to the streets to demand what they thought was theirs.

This kind of racial entitlement has always been just beneath the surface. Manifest Destiny is central idea of this country. That idea fueled western expansion and it’s been an idea within the American consciousness since the country’s “founding.” It’s the idea that white Americans are entitled to something by birthright, that their ancestors built this country of ours. It’s an idea that has been used to justify the almost total extermination of one race and the enslavement of another. This kind of hate isn’t new in America. These are just the men that were headstrong enough to put their hate on display.

The torch-wielders marched until they came down the steps to the Thomas Jefferson statue. There they met a few dozen counter protesters chanting, “Black Lives Matter.” They were quickly drowned out by the white supremacists chanting, “White Lives Matter.” The white supremacists encircled Jefferson and the counter protesters. The air became putrid with the smell of pepper spray then I saw torches snap in half and take flight. A  full-blown brawl ensued beneath the statue of a slave-owning Founding Father of this country. The fight didn’t last long. It broke up when people fled the scene and the police made a surprise appearance. The police had been absent throughout the entirety of torch march. The police broke up the fight as if it were a drunken frat party that had gone too far. Calmly and routinely.

The next day, Saturday, the day of the Unite the Right rally,  I arrived at Emancipation Park around 11:30 in the morning. It was already a total brawl. White supremacists clashed with anarchists and communists. The white supremacists were tossing smoke grenades into the crowd to scare people. Every smoke grenade quickly became a projectile; most of the time they were launched back at their previous owners. Clashes would ensue with sticks or flag poles and shields. Most of the fights would end with one side spraying the other with pepper spray, forcing a momentary retreat. Clash and spray, clash and spray.

Each fight was more brutal than the last. Anything that wasn’t nailed down became a projectile. Even a newspaper box was tossed between both sides. The white supremacists on the hill retreated towards the statue of Robert E. Lee as the makeshift coalition of Antifa and other leftist groups overwhelmed them. The police did nothing to keep the groups separate.

The governor declared a state of emergency making any demonstration unlawful. The police announced this loud and clear with bullhorns. The Antifa retreated down the street and surrounded a set of stairs that the white supremacists were being forced down. As the right-wing protesters came down the stairs, it became a theater for the Antifa to mock or beat them. Most tried to act brave before being chased with projectiles or a fresh batch of pepper spray to the face.  The riot police continued to force the white supremacist out of the park which increased the insanity near the stairs. Forcing the right out of the park meant the melee flooded the streets of downtown.

The groups swarmed the streets, some looking for an exit, others for the next conflict. I followed some men carrying a Nazi banner to a nearby garage. I saw a friend of mine, Dan Shular, and we both heard a car scream past. He ran to the street, in the opposite direction of the car. I followed behind him to the intersection from where the car had turned. Walking down I could hear screaming. I figured it was another street brawl but it wasn’t that kind of screaming. As I approached the area I saw the mangled rear end of a sedan and people all over the ground.

There were shoes on the ground, and people screaming. I asked someone what happened and they blurted back at me, “A fucking car just ran over like 20 fucking people, man!” As I got closer I saw people on the ground with EMS and street medics performing CPR on someone. The medics were going at full blast trying to revive the person. I saw her body reacting to the impacts but there was no independent movement. The street medics and EMS never gave up trying to revive Heather Heyer. I watched them beat her chest with shallow thuds even as they loaded her into the ambulance.

The next day Jason Kessler attempted to hold a press conference trying to change the narrative. I stood about 10 feet from him. As he began to speak a swarm of counter protesters started screaming at him. Calling him a Nazi and a murderer. He only spoke for a few moments before someone walked from the crowd and decked him. He tried to run before WHAM! Another hit directly to the face. He fell into a flower bed while cops wearing reflector vest handed him off to riot police. The riot police formed a wall around Kessler and escorted him to a police station, presumably hoping that making him disappear would mean the protesters would also vanish. The police station Kessler was taken to was next to the parking garage where Deandre Harris was savagely beaten by white supremacists.

Charlottesville was a turning point moment for the “alt right” because that’s the first time many members felt repercussions for their involvement in a real way. Some of the protesters lost jobs, family and friends because of their participation in the Unite The Right rally. The events of Charlottesville made alt right organizers re-think strategy as Boston officials made it clear the self-described Free Speech rally in the Common would not be welcome. Black and Latino groups were already planning on standing against the Boston rally, and the events of Charlottesville just added more logs to the fire.

Marchers gathered at Reggie Lewis Track & Field Center in Roxbury in a flurry of signs and protests gear. They marched in a procession to the Boston Common. The Common at that point already had thousands, the protesters had the Free Speech rally encircled. Before the Free Speech rally even truly began, it was called off. Those attendees were escorted out with police assistance. There was a celebratory mood in the air as if the counter protesters knew they had accomplished their goal. On the Boylston side of the Common, protesters gathered to form a blockade against the police paddy wagons that were transporting the right wing demonstrators out of the area. Boston Police came out in their riot suits to push counter protesters out of the way.

“Move back, move back,” the police chanted in unison. Things grew more tense as the protesters did not want to give one inch to the advancing riot line. The street battle continued with Boston Police on Harleys trying to ram through the crowd. After that it progressed into the police charging the crowd, trying to snatch anyone they could, with one riot cop swinging like a lumberjack with his billy club in the middle of the street. The van loaded with right wing demonstrators eventually made a dash, weaving past counter protesters.

There are more white supremacist rallies planned in the coming weeks. The battles I saw in Boston and Charlottesville aren’t over, not by a long shot. Christopher Cantwell, the conservative shock jock said something that I think is true for both sides: “I think that a lot more people are going to die before we’re done here.” He said it to justify Heather Heyer’s death. I think it’s a premonition of more deadly violence in these confrontations.

Shay Horse is an activist and photojournalist based in New York. He was born and raised in Oklahoma and escaped the Indian territory as soon as he could. Shay belongs to the Kiowa and Chickasaw nations. He has covered protests and social uprising in the United States and abroad.