An elegy for the American election 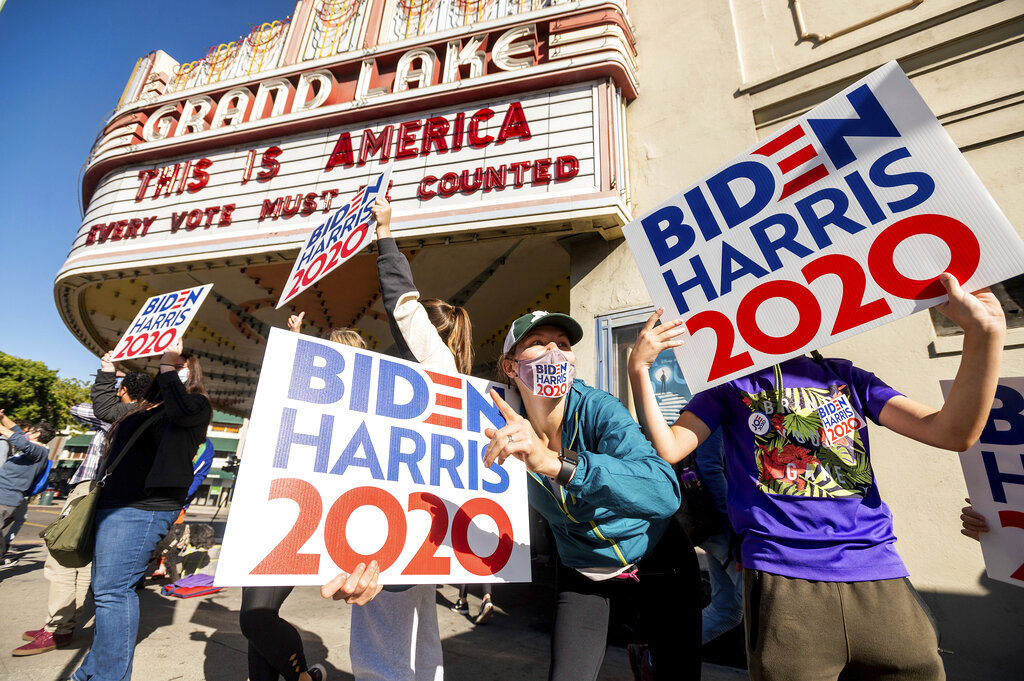 BOSTON — Like great American poetry, this election speaks directly to who we are, and we need to read every line and work hard to understand what’s written in between.

Each line of this American poetry of democracy has its own punctuation and rhythm and its own powerful truth. The cadence was as solid and hopeful as Robert Frost, as mournful and yearning as Langston Hughes and at some points as dark and self-destructive as Sylvia Plath. In the end, the stanzas of this historic 2020 presidential election had all the muscle and resilience, the promise and despair of our American story.

Now that the results have rolled in with former Vice President Joe Biden elected as the 46th president of the United States, and with Sen. Kamala Harris, a woman of color, the first to serve as Vice President, we must listen to each line of this American poem.

There was the poetry of patriotism muffled through protective masks amid the quiet toil of election officials and poll watchers, from both parties, who asked us all to be patient as they counted an historic voter turnout of more than 140 million voters who found their ways to the polls or mailed in their ballots under a dark cloud of a global pandemic

There was the poetry of defiance in the “good trouble,” as the late civil rights icon John Lewis would have called it, among the voters in the 5th Congressional District of Georgia, where Lewis served for 30 years before his death in July. It was Lewis’ district that proved to be the tipping point that put Biden in the lead in Georgia, which, if it survives a likely recount, will mark the first time in a generation the state has swung Democrat. That would give Lewis the last word in a running political feud with Trump that ran right up to his funeral.

There was rhyme that unfurled like a flag when Biden’s birthplace of Pennsylvania tipped in his favor due to mail-in ballots that washed in on the wave of COVID and that proved to be overwhelmingly in support of him. This was particularly true in the urban centers of his hometown of Scranton and in Philadelphia, yielding a surge ahead of Trump in the vote count and opening the path to the presidency through the 270 Electoral College votes Biden needed to claim victory. But even as Saturday would put that total of electoral votes to 279, as of 3:00 p.m. ET today, and the popular vote at an historic high of more than 80 million. Despite that mandate, the urban and rural divide evident in Pennsylvania and across the country is also fraught with meaning and presents an enormous challenge for Biden and for us all.

There was poetic justice in the hard work on voting rights in Georgia by Stacey Abrams, who lost the gubernatorial race in 2018 by slightly over 1% of the vote in an election marred by voter suppression efforts under the eye of the Republican Secretary of State Brian Kemp who was not only the referee in this race, but also her opponent. Since then, Abrams has turned all of her efforts to expanding the vote especially for long-disenfranchised Black voters in the state, through her organization Fair Fight, as she shared with GroundTruth in this sweeping interview.

To close, there was a sad elegy, a loss of confidence in our democratic systems as the nation watched President Trump appear in the dead of night like a tinpot dictator and try to claim victory before the votes were counted, as GroundTruth’s Kevin Grant wrote in his column. Trump and his legal team were out to spin a final web of lies and deflections and accusations that even the Republican leadership, which has been in his spell for years now, decided as too much to tolerate. Trump is vowing to keep up his legal challenge to the results of this election, but his pounding on the podium and his ALL CAPS tweets now ring more and more hollow.

Now, huge swaths of the country must go slouching into a post-Trump America amid a foreboding cadence as Trump’s attempts to stir his far-right followers to resist the voice of Democracy, and obey a dog whistle calling violent extremist groups and heavily armed militias with a long history in Michigan to openly brandish assault rifles to take on their own interpretation of self defense. A dark vision captured in a visual storytelling project led by our Photo Director Ben Brody. This reportage, “The Center Cannot Hold,” takes its title not from an American poet, but from the great Irish poet W.B. Yeats who in 1919 was prescient about the gathering threat of the horrors of war. Yeats’ words from “The Second Coming” resonate in the moment we are in and serve as a warning for what the future might hold if we allow the divisions in our country to deepen:

Turning and turning in the widening gyre

The falcon cannot hear the falconer;

Mere anarchy is loosed upon the world,

The blood-dimmed tide is loosed, and everywhere

The ceremony of innocence is drowned;

As the votes were counted and it became clear that Biden was the frontrunner, with AP calling it for him first in Wisconsin, then in Michigan and stunningly in Arizona where the late Sen. John McCain’s constituents allowed McCain to raise a middle finger from the grave, a pyrotechnic profanity by the war hero who was Trump’s nemesis. Taking those key swing states set the former Vice President on the path to victory. When Biden takes the stage to officially claim victory he’ll begin to shoulder the heavy burden of pulling us all back together to be one country again.

When the cheers and the celebration quiet down tonight, Biden would do well to retreat to a quiet place and read the sobering promise that rings through the lines of Langston Hughes’ powerful and enduring 1935 poem, Let America Be America Again, especially these closing lines:

I say it plain,

America never was America to me,

And yet I swear this oath—

Out of the rack and ruin of our gangster death,

The rape and rot of graft, and stealth, and lies,

We, the people, must redeem

The land, the mines, the plants, the rivers.

The mountains and the endless plain—

All, all the stretch of these great green states—

NOTE: This column was first published Friday night and updated on Saturday to include final election results, as called by CNN, The New York Times and FOX News, that have elected Joe Biden as the 46th president of the United States.