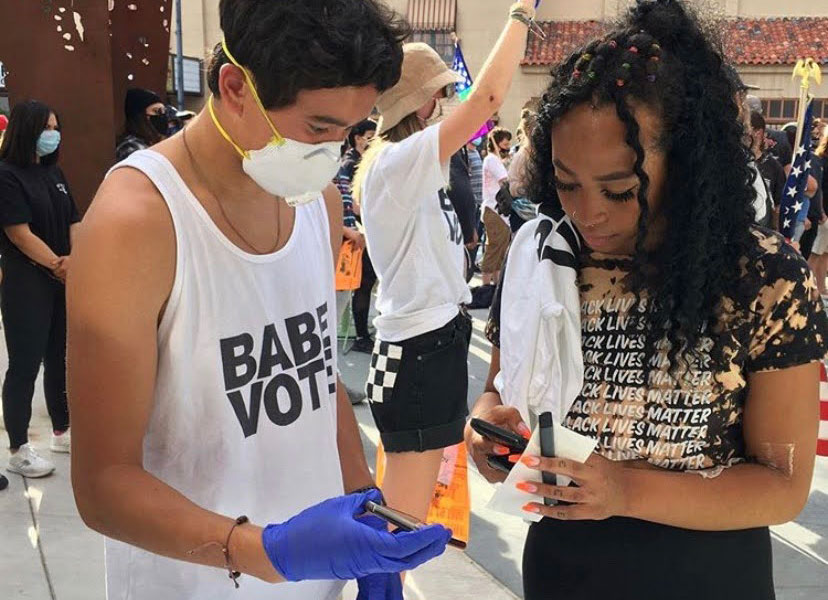 In the absence of concerts and other large gatherings due to the pandemic, voting registration drives are now taking place at protests. (Photo by Shiva Rajbhandari/Wikimedia Commons)

Gregory Sarafan spends most election years assisting team leaders with registration events at concerts, where they target young, unregistered voters. But Sarafan, regional coordinator for the voter registration organization HeadCount, knew that this summer, he was more likely to find that demographic marching through the streets to protest against police brutality after the deaths of George Floyd and Breonna Taylor.

So he had an idea. He pasted a 12x12in QR code on his protest sign. Then – from a socially distant six feet away – protesters could scan the sign from their smartphones and immediately register to vote. “The protests were an awakening across all different strata of society,” Sarafan said. “People who might not otherwise engage in civic discussions were there.”

It worked: across all its affiliates, HeadCount registered 14,898 new voters in June, compared with only 1,204 in June 2016. Now Sarafan’s effort is part of a wave of voter mobilization initiatives that have emerged nationwide. Many of those are particularly focused on Black voters – an enfranchisement effort that some activists and historians say hasn’t been seen at this scale since the civil rights era.

Veteran voter mobilization groups like HeadCount, Rock the Vote, Voto Latino and When We All Vote were already planning for a big year, but seized the moment to launch new projects and to reframe messaging around the surging police reform and racial justice movements. The energy has also inspired high-profile Black celebrities like Beyoncé and Solange Knowles, LeBron James and Whoopi Goldberg to step into the fray with PSAs and a number of new initiatives to engage Black voters.

“This has been the story of multiple generations,” said Jennifer Lawson, a veteran civil rights activist who marched in the Children’s Crusade in Birmingham, Alabama, in 1963. “I have a profound appreciation for what the younger activists are doing in the streets today in terms of building awareness and trying to create change in this country.”

For many, the pandemic and concurrent Black Lives Matter resurgence created a unique and complex moment ripe for widespread political engagement.

“Everyone is so frustrated,” said Harleigh Tensen, an attorney and civil rights activist in Brooklyn. “It’s the same thing over and over and over again. Change is only going to happen through voting.”

On the first night of the protests in early June, Tensen went out to march through New York City with a sign displaying a Black Lives Matter slogan. But the next night, after seeing a sea of social media images of HeadCount’s QR codes, Tensen tracked down a printer and upgraded her sign. Over the next few nights, dozens of protesters scanned her code and registered to vote.

“I’ve been protesting a long time,” she said. “But clearly, there’s a different energy here.”

Former NFL cornerback Jabari Price’s political awakening came when a video surfaced in May of two white men shooting Ahmaud Arbery while he was on a neighborhood jog. “I was immediately outraged. I take jogs all the time. I go on bike rides with my daughter,” Price said. “That was Ahmaud Arbery, just like it could’ve been Jabari Price.”

Price has been registered to vote in his native Florida for two years, but it wasn’t until recently that he felt his vote mattered. “I was one of those people that just think my vote is one in a million,” he said. But now, he’s impassioned: “One vote is everything.”

Between these efforts and an uptick in civil engagement, registration surged in several states in the days after protests began. Data gathered by TargetSmart showed an increase in registrations from young people and people of color in California. In Georgia’s June primary, Black voters went from 35% of early voters before demonstrations to 47% of early voters after they began. As of early August, the national registration group Rock the Vote had processed more than 700,000 registration applications – 200,000 more than at the same point in 2016. That was largely thanks to a massive June, when the organization more than tripled its efforts from June 2016.

With pandemic-related restrictions, the push for voter registration this year is especially crucial. A report by the Center for Election Innovation and Research estimated that, with most of the usual places where people register to vote closed, 2 million fewer voters registered each month since the pandemic hit in March. With a virus that is affecting the Black community particularly hard, voting rights activists have been concerned.

The movement is also driving turnout at local elections. In Travis county, Texas – the county that contains the city of Austin – the progressive district attorney candidate José Garza drew 2,000 more votes in June’s Democratic primary runoff than the March primary.

“There’s no doubt that what happened in May and June really brought into sharper focus the totality of these issues,” said Garza.

Black voters have proven to be a political force in recent years. Since 1992, no candidate has won the Democratic nomination for president without also winning the majority Black vote, and Black voters are expected to make up more than a quarter of Democratic primary voters this year. Some analysts say Hilary Clinton’s failure to turn out Black voters contributed to her 2016 election loss.

This year, though, there’s more at stake with Black voters almost unanimously hoping to vote out Donald Trump. “People are in outrage, and recognizing that systemic change comes from a shift in the power structure,” said Moné Holder, a senior program director with the advocacy non-profit New Florida Majority. “People are naturally making the connection to voting being the change agent that we need.”

Meanwhile, voting rights activists have been trying to fight Black voter suppression consistently since the 60s, but with added diligence since the supreme court gutted the Voting Rights Act in 2013. The decision opened up the door for new voting policies that experts say disproportionately target Black voters and other voters of color. These include flawed voter roll purges, narrowed voter registration processes and restrictive voter ID laws.

But Lawson, the lifelong activist, said the current push for Black voter registration amid today’s Black Lives Matter resurgence feels different, and gives her hope. She is reminded of her early days in Alabama, marching through the streets.

“I’m proud of the work we did during civil rights, but it wasn’t enough then,” she said. “I hope it’s enough now.”

A version of this story appeared on THE GUARDIAN on August 7, 2020