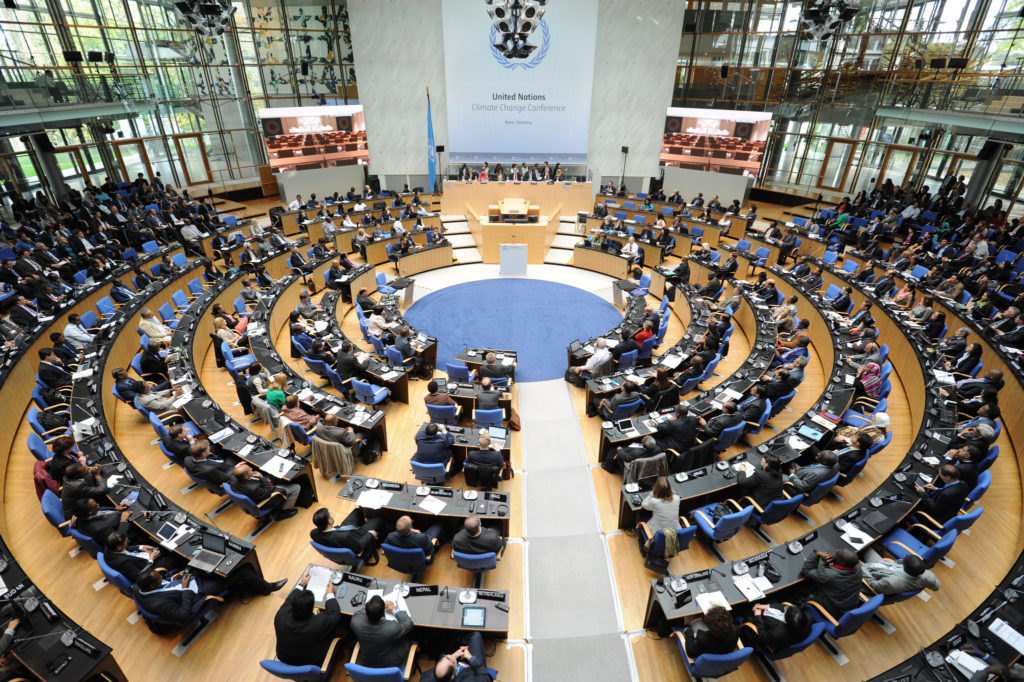 A shot of the 21st annual “conference of the parties” (COP) under the U.N. Framework Convention on Climate Change (UNFCCC), which took place in 2014. This year's conference will mark the 23rd COP climate change meeting. (Photo courtesy of U.N. Climate Change/Flickr)

BONN, Germany — As global leaders gathered here at the annual United Nations climate talks Thursday, several senior Trump administration energy and environment officials were thousands of miles away participating in a much different kind of conference: One hosted by climate change skeptics.

While the focus in Bonn is on combating climate change, at the America First Energy Conference in Houston, hosted by the libertarian Heartland Institute, the talk was about fossil fuels and how – as one of the event’s panels asserted – “human activity … is not causing a climate crisis.”

Environmental Protection Agency Administrator Scott Pruitt, who is not expected to go to Bonn, appeared at the conference with a welcome video to the attendees and speakers – many of whom were from groups like Heartland that reject the scientific consensus on climate change.

“There’s great optimism across the country, and I hope you’re feeling that in Houston, Texas,” Pruitt said in the video. “God speed in what you’re doing.”

Under Pruitt, the EPA has moved to roll back regulations related to climate change, notably the Obama administration’s signature domestic effort to limit carbon emissions, the Clean Power Plan.

The Heartland event included discussions on energy and national security; the future of coal; the costs of excessive regulations; and the benefits to health, agriculture and the environment of ending the “war on fossil fuels.”

Heartland spokesman Jim Lakely called the timing of the two conferences “a happy coincidence.” He said Heartland has been impressed with President Donald Trump’s energy policy and conceived of the conference as a forum to discuss its progress. Heartland has sought to promote a more skeptical view on climate change, arguing that the near-unanimous consensus among scientists that humans are changing the climate is incorrect. Earlier this year, it mailed climate change skeptical materials to hundreds of thousands of science teachers across the country.

At the Houston conference, the keynote speaker was Vincent DeVito, a senior official at the Department of Interior involved in shaping policy around energy development on public lands. Richard Westerdale, a senior energy adviser for the State Department who worked at ExxonMobil for two decades, spoke on a panel on energy and national security. Also at the conference was Myron Ebell, who led Trump’s transition team for the EPA and has frequently rejected the threat of climate change.

In his keynote, DeVito said the Trump administration is moving as quickly as possible to open up the Interior Department’s lands to fossil fuel extraction, which he said would generate billions of dollars a year for the government.

“The war on American energy is completely over,” said DeVito of the Trump era in his keynote address. “We are becoming the strongest energy superpower that the world has ever known.”

Meanwhile, at the U.N.’s COP23 conference in Bonn, the United States has taken a backseat to ongoing international negotiations that address global warming. Notably, it became the sole U.N. party to reject the Paris Agreement, the historic 2015 climate accord, after both Nicaragua and Syria signed onto the agreement in recent weeks. In June, Trump vowed to withdraw from the Paris Agreement, calling it “draconian” and arguing it was not made on good terms for American taxpayers. A full U.S. withdrawal from the Paris Agreement would take a few years.

As in years past, the U.S. is being represented here by a State Department-led delegation, including some members that were involved in creating the Paris Agreement. This year’s negotiations are focused on teasing out the rules that will govern the climate accord.

In previous years the U.S. has hosted a large pavilion and dozens of events showing off U.S. efforts to curb carbon emissions. This year, the U.S. declined to host a pavilion and has organized just one event: A panel on how to make fossil fuels and nuclear power cleaner and more efficient.

This has inspired sneers from participants in the Bonn talks, many of whom believe keeping fossil fuels in the ground is the best way to stave off global warming’s most catastrophic consequences. Just last week, 13 federal agencies released a report saying that evidence of the human role in global warming is stronger than ever. The Trump administration did not stand in the way of the report’s release, as critics had feared, but downplayed its findings.

Sen. Sheldon Whitehouse (D-R.I.), who is in Bonn, said the timing of the Heartland conference was meant to confuse the public on the issue of climate change during the U.N. conference.

“Trump is a dream come true for the climate denial operation, which has always craved legitimacy,” Whitehouse said. “Trump being willing to send government officials to one of these phony-baloney things is really regrettable because there’s no science behind it.”

A version of this story appeared in FRONTLINE on November 10, 2017