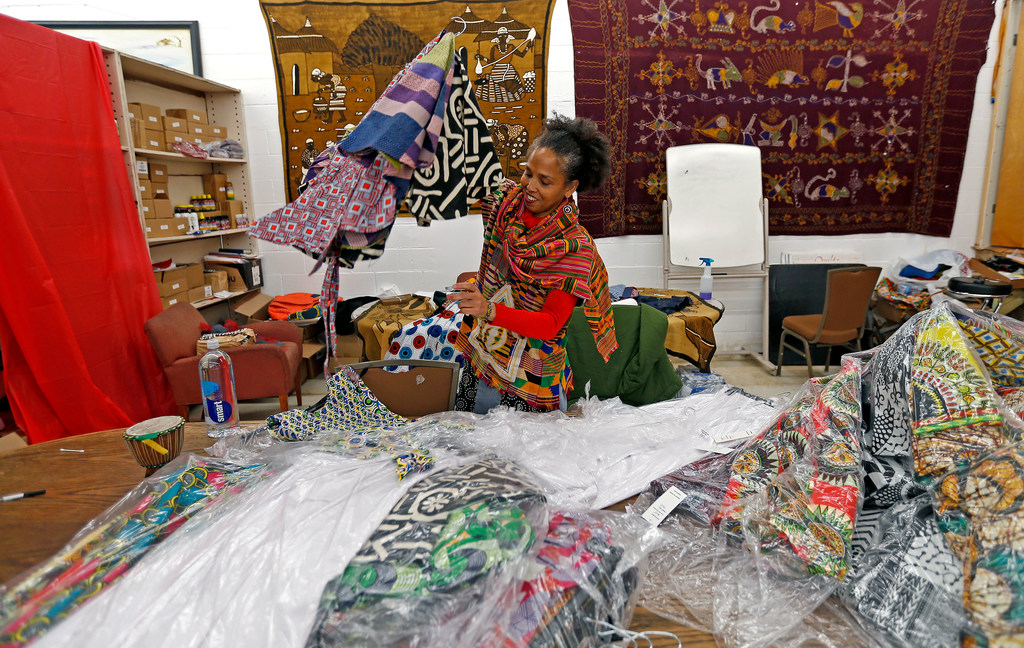 DALLAS — Surrounded by African sculptures and dashikis, Akwete Tyehimba helps a customer put on waist beads. After she adjusts them to her satisfaction, Tyehimba takes a step back so her customer, Jerricka DeAmber, can look at herself in the full-body mirror propped against the register counter.

“Waist beads are for African women to recognize the power of being a woman and celebrate all of your curves and your beauty, your sensuality, all of that,” said Tyehimba, owner of Pan-African Connection, as she smiled at DeAmber.

Pan-African Connection is a bookstore and art gallery in the southern Dallas neighborhood of Oak Cliff. She’s one of those people who emanate warmth — she listens when people talk and she elicits honest answers to simple questions.

Her store evokes that same feeling. Customers are greeted at the door by a table of fliers announcing community events and business cards advertising local services. A smiling Chadwick Boseman, the Black Panther star who died in September, is memorialized in a frame on the register counter.

Smoke from incense and white sage drift over the bookshelves to the gallery side of the store, where portraits of Martin Luther King Jr. and others hang or sit propped against the wall. The front of the gallery houses a platform stage and an open space where plays, language classes, yoga and other events take place. When the multipurpose area is empty, Black artists sing from the speakers or a historical speech emanates from a small TV near the entrance.

In March, when the pandemic forced business shutdowns across the country, Tyehimba wasn’t sure how her 31-year-old store would survive. She took over operations when her husband died, in 2012.

During the shutdown, she worked every day, shipping out call-in orders, operating a curbside pickup and revamping the store’s website. A call to her mortgage company allowed her to defer house payments until August and prioritize paying the store’s rent — more than $4,000 every month.

“My faith and my culture teaches that I have to trust that everything is going to be alright,” the 57-year-old from Waco, Texas said. “Somehow we were going to get through it.”

But she didn’t just get through it. Customers flooded in when she opened the doors for walk-ins in late May, after Texas allowed retail businesses to reopen. Books like “White Fragility” by Robin DiAngelo and “Hair Love” by Matthew A. Cherry flew off of the shelves. Her section of essential oils and natural soaps were cleared out, too.

Because of the focus on African and Black culture, the store normally sees an increase in business around Juneteenth, the June 19 holiday with origins in Texas that commemorates the emancipation of enslaved Black Americans.

But Tyehimba said the uptick happened weeks before that.

When George Floyd died on Memorial Day after a white Minneapolis police officer knelt on his neck for nearly eight minutes, protests against racism and police brutality swept the nation. Along with demonstrations, many took to social media to encourage people to buy from Black-owned businesses.

Google Trends recorded an all-time high for the search “Black-owned businesses near me” in the U.S. in June. Dallasites joined the cause, too.

“God made a way, and we never saw it coming,” she said.

Tyehimba said the movement for racial justice impacted her business in a way that she has never seen before. She even met shoppers who traveled from outside of Dallas to support the store.

“Not just Black folks — white folks were coming in from everywhere,” Tyehimba said. “A lot of white folks would come in and let me know that they were more human than what this system is.”

While some have just begun to make a conscious effort to buy from Black-owned establishments, many of Pan-African Connection’s customers have made the store part of their lifestyle.

DeAmber started shopping at the store about five years ago when it relocated from South Dallas to its current home in Oak Cliff.

“When they moved, I was like, ‘Oh my God, I’m so excited,’” said DeAmber, who visits regularly to buy African black soap.

“I started going there immediately.”

Porscha Kelley, who grew up in Oak Cliff, said that she always tries to buy from Black-owned businesses.

Kelley has been a customer at Pan-African Connection since the store was in South Dallas — it relocated to Glendale Shopping Center about five years ago. In 2016, Kelley hosted a signing for her first book, “Young Black and American,” at the store. Since then, she’s written a second book, and both are for sale there.

Kelley called Tyehimba a “champion in the community for young entrepreneurs.”

“We’re not just a bookstore,” Tyehimba said. “We’re like a family. Their children are my children… We are there to support each other.”

Brooklynn Cooper covers southern Dallas for The Dallas Morning News. This dispatch is part of a series called “On the Ground” with Report for America, an initiative of The GroundTruth Project. Follow her on Twitter: @dodgebrooklynn